Sightseeing in Milos Island - what to see. Complete travel guide 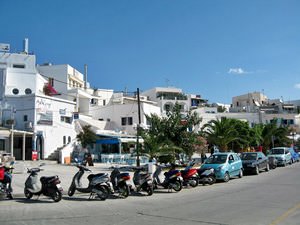 The Greek island of Milos located in the Aegean Sea is one of the most attractive islands of the Cyclades. Despite its tiny size, it boasts an abundance of interesting attractions and cultural centers. The island features tourist infrastructure, so travelers won’t experience lack of choice of suitable places to stay.
Cuisine of Milos Island for gourmet with top restaurants and cafe
The taverns of Milos will allow you to enjoy all the iconic dishes of the Greek cuisine. If you are interested to try everything exactly how the Greeks prepare food for themselves and not …

Open
There is one of the two active volcanoes in Greece on the island, as well as many other interesting natural objects. The bulk of Milos guests are fans of beach going and eco-tourism; it’s very comfortable and amazing site for vacations with kids. The most visited place on the island is the ancient city of Melos that is an important archaeological area. Scientists have found there a statue of Venus de Milo, which is currently stored in the Louvre. Tourists can stroll along the island's historic place and admire the ruins of ancient fortifications and the Roman amphitheater.
The largest settlement and the former capital of the island is the town of Adamas; the lovely Church of the Holy Trinity is among its historical characters. The Mineralogical Museum stands out from cultural venues; it offers visitors a rich collection of minerals that have been discovered in different periods of exploring the island. The ancient French cemetery, where soldiers who died during the Crimean war and world wars were buried, is situated there. Copyright www.orangesmile.com
Authentic traditions, festivals and lifestyle of Milos Island inhabitants
While talking, the Greeks like to raise their voices and actively gesticulate. When talking to a local resident, remember that some gestures here have a meaning different from the …

Open
Another attractive place and the island's capital is the city of Plaka. The city is located in a remote mountainous area, so it’s impossible to get there by car. Common forms of transport are bike and motorcycle; a lot of pleasant surprises wait for fans of land discovery. 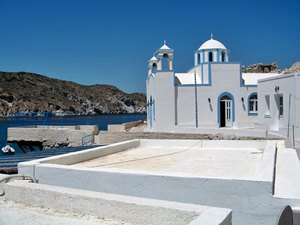 The current capital has preserved the old 13th century castle, which was built by the Crusaders. Church of the Virgin Mary of the sea, patron saint of sailors, is situated nearby. The church is considered the most spectacular landmark of the capital, its impeccable appearance is complemented by luxurious interior decoration. Guests of Plaka are recommended to visit the Archaeological Museum, which has an extensive collection of ancient statues and other artifacts discovered on the territory of Milos. The Ethnographic Museum will introduce cultural traditions of the indigenous population; its walls have being housing very interesting cultural events for many years.
Excursion over cultural sights of Milos Island - 'must visit' points of interest
In most cases, you will begin your acquaintance with the island from the main local port – the village of Adamas. Here you can admire not only the typical Cycladic architecture but also …

Open
There is a unique historical object, catacombs, near Melos. They were constructed more than 1,500 years ago. This historic property is the only nationwide; the total length of underground tunnels is 185 meters. According to scientists, catacombs served as necropolis, and more than 2,000 Christians were buried there. 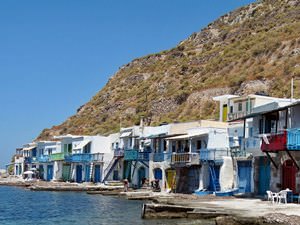 Amazing caves of Milos, including Papafranka Cave, are natural attractions of these places. Pirates actively used local caves as shelters In the Middle Ages; this is where they hid treasures. Incredibly beautiful Sikia Cave, thanks to amazing refraction of light rays, looks simply irresistible. This is only a small part of the important sightseeing objects that are worth to see on Milos.
Your active city break in Milos Island. Attractions, recreation and entertainment - best places to spend your day and night here
For those who like beach rest, Milos is great. Most travelers and locals deservedly consider Paleochori the best local beach. Large length, purity, unusual cliffs of different colors, and …

Open
Beaches of Milos are unforgettable and unique, and each of them has its own peculiarities. Sarakiniko Beach is the most famous one on the island. This coastal area is surrounded by incredibly beautiful white rocks. Some rock formations have a very unusual shape, and so several incredibly beautiful canyons were formed under the pressure of wind and water. Because of such an unusual landscape, this beach is often referred to as a “moon” one. Papafragas Beach is no less beautiful and attractive. It looks like a naturally formed rectangular pool that is formed by rocks. 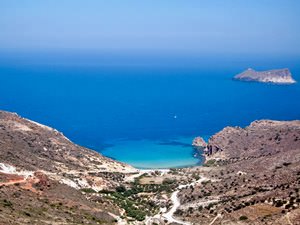 This is a sandy beach that is very calm and peaceful, so no wonder that it is considered an ideal place for family relaxation. Visitors will be able to swim and sunbathe in a very comfortable way, and then explore caves located near the coastline. Firiplaka Beach has also become internationally famous because of its unusual geological formations. Visitors of this beach have a chance to see magnificent sheer cliffs that are painted in all colors of the rainbow. One of these rocks has an arched shape and looks truly spectacular. This picturesque place is great for taking fantastically looking and memorable photoshoots.

This guide to iconic landmarks and sights of Milos Island is protected by the copyright law. You can re-publish this content with mandatory attribution: direct and active hyperlink to www.orangesmile.com.
Milos Island - guide chapters 1 2 3 4 5 6 7 8 9

Survived castles around Milos Island
♥   Castle 'Goulas Castle' Akrotiri, 85.2 km from the center. On the map

♥   Castle 'Exomvourgo Fortress' Exomvourgo, 113.5 km from the center. On the map

Search touristic sites on the map of Milos Island

Sightseeing in regions nearby Milos Island

Sifnos Island
This town is considered the most scenic and picturesque on the island, because of its original architecture. Streets of the village consist of small snow-white houses with brightly decorated balconies. The center of the old village area is Platia Iroon, next to which there is one of the most visited cultural sites of the island, the National Museum. Nearby there is the lovely ... Open »
Folegandros Island
Several major tourist attractions are in the immediate vicinity of Chora. The graceful Panagia Church is among them. This snow-white church building is a classic example of national architecture; centuries later, it has managed to retain its pristine decor and lots of priceless artifacts. Nearby there is amazing Panagia Monastery Ano Meria situated on a hilltop. You can climb ... Open »
Seriphos Island
An important religious object is in the immediate vicinity of the small Galani village. We are talking about the beautiful Monastery of the Archangels. This old monastery is famous for its artful decoration; many unique religious artifacts and paintings have preserved there. A part of the monastery is now converted into a museum representing a rich collection of old books and ... Open »
Ios Island
This miniature town looks very colorful and original to foreigners thank to spots of bright colors on snow-white background of buildings. City streets are decorated with thousands of nectareous flowers, while colorful doors, shutters and window-ledges are distinctive feature of local houses. The capital is situated on a high hill and it's highly recommended to get to the very ... Open »
Paros
The historical center of the island is the town named Parikia, in which you will find many old buildings. In the Castro quarter you can see the protected castle that was built in the 13th century. Not far away from it you will find the temples of Demeter and Apollo. The oldest religious building of the island is Panagia-Ekatontapiliani Church, which was built in the 6th ... Open »
Oia
Oia is the most romantic settlement on the Greek Island of Santorini. Ancient mills on the narrow streets, numerous stairs, and unexpected dead ends await tourists at every step in the charming coastal village. Because of this peculiarity, tourists are better to refrain from exploring Oia for the first time alone – there is a chance that you will get lost. The town is ... Open »

All about Milos Island, Greece - sightseeings, attractions, touristic spots, architecture, history, culture and cuisine. Prepare your trip together with OrangeSmile.com - find out the 'must see' things in Milos Island, which places to visit, which excursions to take, where the breathtaking views are waiting for you. Planning your trip with this travel guide will help your to get the most out of Milos Island in few days.