Sightseeing in Karpathos Island - what to see. Complete travel guide 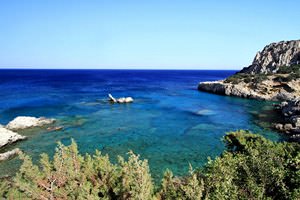 The Greek island of Karpathos situated next to Crete is well-known to modern tourists. This is an amazing island that has experienced a lot of important historical stages for hundreds of years. Minoans were first to settle in these places; subsequently the island has belonged to Turkey for several hundred years, and then was captured by the Italian invaders. Its union with Greece happened relatively recently, in 1948. Today the beautiful island is very popular among fans of excursions and beach holidays.
Authentic traditions, festivals and lifestyle of Karpathos Island inhabitants
While communicating with Greek people, do not forget that they have their own body language. When they want to say something, they touch or pat the lower lip with the index finger. When …

Open
The capital of Karpathos Island is the picturesque port city of the same name. Despite the fact is that it’s the largest town on the island, there are not so many attractions here; Karpathos is largely redeveloped. Some historical monuments are situated nearby, and that’s not difficult to get there.
One of the most unusual sights of the island is the Basilica of St. Fotini. It was discovered by archaeologists in 1972; according to scientists, the Basilica is about 1,500 years old; the amazing building was restored by efforts of modern architects. Its snow-white building is one of the most beautiful on the island. Fans of natural attractions will be fond of walking around Aperi, the old capital of Karpathos. It’s located in a picturesque mountain terrain; these beautiful places are literally made for hiking and admiring nature. Copyright www.orangesmile.com
Excursion over cultural sights of Karpathos Island - 'must visit' points of interest
Karpathos reached its height in 5-6 century A.D, during the times of the greatest power of ancient Greek civilization. Romans, Byzantines, Turks and Venetians visited the island. Each of …

Open
No less interesting is the mountain village of Volada. Besides amazing natural sites, you can see lots of unique architectural attractions there. Houses of local residents erected more than a hundred years ago can be seen in the ancient mountain site. The highest village on the island is Othos, where one of the oldest buildings is occupied by the amazing Ethnographic Museum. After admiring priceless exhibits of the museum, it’s worth to visit the ancient Church of the Virgin. Its construction took place in the 17th century; today the church walls house many unique religious artifacts. 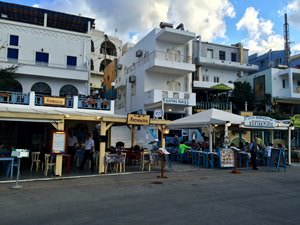 In the immediate vicinity of the mountain village there is the picturesque Stes countryside, a paradise for hikers. Here in a small mountain area, you can admire a huge number of rapid streams, as well as lots of rare plants and animals. The old town of Piles is the best fit to explore the way of life of the indigenous population. It seems that life here hasn’t changed for hundreds of years. Like many years ago, winding streets of the city are full of old stone houses with terraces decorated with twining flowers. The town has some interesting craft shops and souvenir shops that will make the walk more interesting.
Your active city break in Karpathos Island. Attractions, recreation and entertainment - best places to spend your day and night here
Karpathos is an ideal place for those who are keen on walking. The island has recently started to develop as a touristic place, that’s why there are many virgin natural objects. …

Open
Trophies of ancient times can be seen near the town of Arkasa, where scientists have discovered the ruins of the ancient Arkassia city. There is an important site, the ruins of the temple of St. Anastasia, nearby. Locals consider these amazing places to be sacred. Of course, the most important attraction of the island is the town of Olympus. This unique place is a vast open-air museum, and each element can be considered a priceless artifact. You can admire everything from ancient architecture and way of life to the language spoken by the locals. Walk through this wonderful town will be a real journey into the past. It’s worth to note that locals treat tourists very friendly. 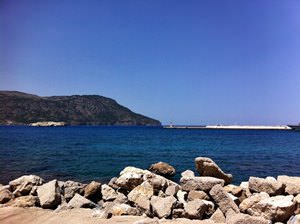 The best beaches of the island are located in its southwestern part. They are safely protected from the wind by a mountain chain and are an incredibly calm and peaceful place. This part of the island has mostly sandy beaches with quite shallow coastal waters. These picturesque beaches are equally popular with tourists with children and divers. Fans of diving and snorkeling who are not experienced yet will find local beaches particularly comfortable. The longest beaches are located near the capital city of the island, Pigadia. Beaches near this city have a well-developed infrastructure. Vacationers will easily find modern sports centers, restaurants, countless interesting shops, and entertainment centers. There is a magnificent promenade along the main beach of the capital. Needless to say, tourists love walking there.
Best beaches and recreation areas around Karpathos Island
Karpathos won’t disappoint fans of beach recreation, as a choice of scenic stretches of coast is more than notable. Agios Minas Beach is reasonably considered one of the most beautiful …

Open
Kyra Panagia is, without a doubt, the most beautiful beach on the island. This beach has wonderful soft and white sand. Magnificent rocks surround the beach, creating a striking contrast with the white sand. Fans of surfing also have a suitable beach on the island – Afiartis. There are strong waves almost all year round there, so no wonder that sportsmen love to spend their time there. The large beach has training areas suitable for both beginner and experienced surfers.

This guide to iconic landmarks and sights of Karpathos Island is protected by the copyright law. You can re-publish this content with mandatory attribution: direct and active hyperlink to www.orangesmile.com.
Karpathos Island - guide chapters 1 2 3 4 5 6 7 8 9

City tours, excursions and tickets in Karpathos Island and surroundings

Survived castles around Karpathos Island
♥   Castle 'Monolithos Castle' Monolithos, 77.2 km from the center. On the map

Search touristic sites on the map of Karpathos Island

Sightseeing in regions nearby Karpathos Island

Tilos Island
The capital of the island is famous for its unique religious landmarks. The Monastery of St Anthony storing a priceless collection of ancient artifacts, as well as the St. Panteleimon Monastery are attention worth. The latter is now converted into a hotel. One of the most spectacular historic buildings in the capital houses a museum that introduces history and culture of the ... Open »
Rodos
Rich historical heritage is one of attractive features of the resort. Here have remained numerous monuments, each of which is unique and unforgettable. The main part of the attractions is located in the so-called Medieval town. Chora district is the location of several mosques, churches and homes. The most famous structures are Suleiman Mosque, Church of Chora Mother of God, ... Open »
Faliraki
Faliraki carefully cherishes its ancient monuments. The building of many of them took place in the 18 - 19 centuries. Among the attractions of this place we should definitely mention Church of St. Nektarios - one of the largest buildings of the village. Central Waterfront is one of the most picturesque districts in the town. Here you will find all sorts of restaurants, bars ... Open »
Kos Island
Another interesting landmark is the Asklepion. That’s a large healthcare complex built back in 4th century DC. Historical records say that there were more than 300 of such complexes in Greece, but only a few of them have survived until these days. Asklepion is a massive architectural complex with ruins of the temple of Asclepius and Appolo temple, antique medical school, ... Open »
Agios Nikolaos
It is also worth taking a walk across the docking district, where are located several very good taverns and restaurants. This is the place where you can find best dishes made of fish and seafood. Travelers, who seek really unforgettable experience, may enjoy visiting Spinalonga Island. An ancient fort is located there almost in its pristine condition. This island is also ... Open »
Kos
The castle of loannite Knights built in the 15th century is one of those facilities. Stones and marble left from the houses destroyed by the earthquake were used during the building of the fort. Palm Avenue is one more interesting place recommended for visiting. Here you will see a huge sycamore. According to one of the theories, the tree was planted by Hippocrates. Under the ... Open »

All about Karpathos Island, Greece - sightseeings, attractions, touristic spots, architecture, history, culture and cuisine. Prepare your trip together with OrangeSmile.com - find out the 'must see' things in Karpathos Island, which places to visit, which excursions to take, where the breathtaking views are waiting for you. Planning your trip with this travel guide will help your to get the most out of Karpathos Island in few days.