Sightseeing in Lemnos - what to see. Complete travel guide 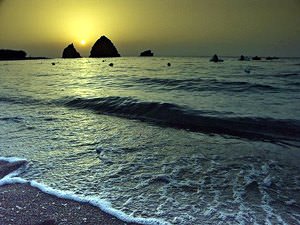 Lemnos is a Greek town located on the north of the Aegean Sea. This is an ancient island that is famous starting from 1 thousand years BC. The island is called after the white mountain that has been used as a guideline for sailors centuries ago. This is a volcanic island that is made of mostly shale and volcanic rock.
Excursion over cultural sights of Lemnos - 'must visit' points of interest
The main value of Lemnos is historic Christian temples and unique archaeological areas in which researchers discovered traces of ancient settlements. Each city and each village has its own …

Open
The population of the island is traditionally occupied in farming. On Lemnos are grown wheat, grape and olives. The beaches of the island are known for their beauty and convenience. This is particularly true for Agios Efstratios Island located not far away from Lemnos.
Marina is the main town of the island. The southern part of the town is the location of a small haven with several cozy taverns that are liked by the local fishermen who rest there. The northern part of the embankment is more modern and stylish as here are located hotels and entertaining facilities for tourists. The nightlife of Lemnos is also gathered there. Not far away from the embankment you will find Museum of Archeology that features a large collection of antique findings. The largest part of items has been transferred to Athens museums, but the local museum still exhibits a collection of lamps and bronze weapons. Above the town proudly raises a fort built on the basis of the old acropolis. Copyright www.orangesmile.com
Your active city break in Lemnos. Attractions, recreation and entertainment - best places to spend your day and night here
Lemnos is a great holiday destination for fans of beach activities and water sports. The island will surely appeal to those fond of ecotourism and natural attractions. On one of the Lemnos …

Open
Deep into the island is located Kondias – a picturesque settlement build between high pines. In this town almost all houses have red tiled roofs, creating cozy and warm atmosphere.

A part of Lemnos that is closer to Turkey, the place where once has existed Troy, is the location of Poliochni. Actually, this town has been founded before Troy. In 2100 BC a great earthquake damaged the island greatly and almost destroyed this town. After the disaster the town was abandoned and renovation works wasn’t conducted until our days. Now this is a sight of excavations, during which have been founded multiple gold items and skeletons. Close to the destroyed settlement is located a village named Caminha. 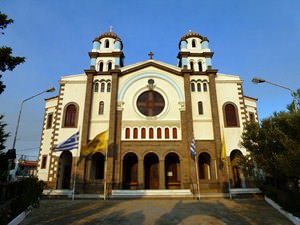 Visitors may also enjoy their trips to Ifestiya, Kabiri, and cave of Philoctetes.

A number of interesting sights is located on the territory of the ancient city of Hephastia. It is the largest city on the island. Once, there was a major religious center. A lot of interesting old buildings have survived in the city till now. You can see beautiful palaces, antique public baths, and also visit the theater, which is still used for cultural events. For many years, archaeologists continue to work on the territory of the ancient town. They managed to find fragments of ancient statues, on which not only people but also mythical creatures are depicted.
Advices to travellers: what you should know while being in Lemnos
1. The hottest weather on the island is between June and September. It would be ideal for beach recreation and water activities, but not the best for long walks. 2. For active tourists, …

Open
On the island, there are several interesting natural attractions; among them is the beautiful Despotis Hill. On its slopes and foothill areas are many interesting excursions conducted. If you believe the ancient Greek myths, then once, on the top of this mountain was located the forge of Hephaestus. Today tourists come to these places to admire the natural beauties, as well as to appreciate the original charm of the villages located in the foothill areas. 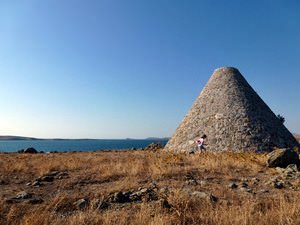 The main symbol of the island for many years remains the Fortress of Myrna. This protective structure was built on the island in the beginning of the 13th century. In 1770, the construction was badly damaged in the course of the next battle between Russian and Turkish troops only fragments of the once majestic fortress were preserved till now. It is located on a small hill, and many tourists prefer to admire the fortress after sunset. In the evening, it is decorated with interesting lighting, which gives the impression that the fortress is floating in the air.
Extraordinary weekend in Lemnos - unusual places, services and attractions for travel gourmet
…

Open
The most unusual religious monument on the island is the Church of Panagia Kakaviotissa, located on the top of Mount Kakavos. The main feature of this ancient church is the absence of a roof. It is replaced by a natural rocky dome. An ancient shrine, has found refuge under it. A lot of unique icons and other values are stored there. The first mention of this church dates back to 1305. Its founders are the ascetic monks who lived in local caves. For locals, this church is to this day one of the most important and revered on the island. On the days of the great Christian holidays, it always draws together many people and conducts religious activities.

This guide to iconic landmarks and sights of Lemnos is protected by the copyright law. You can re-publish this content with mandatory attribution: direct and active hyperlink to www.orangesmile.com.
Lemnos - guide chapters 1 2 3 4 5 6 7 8 9

City tours, excursions and tickets in Lemnos and surroundings

Survived castles around Lemnos
♥   Castle 'Simonopetra monastery-fortress' Mount Athos, 81.9 km from the center. On the map

♥   Castle 'Stavronikita monastery-fortress' Mount Athos, 83.1 km from the center. On the map

National and city parks around Lemnos
♥   World Heritage Site 'Mount Athos' , 87.6 km from the center. On the map

Search touristic sites on the map of Lemnos

Sightseeing in regions nearby Lemnos

Limnos Island
The first capital of the island, Moudros, offers rich excursion programs. There are well-known historical monuments literally on every street. The Church of the Annunciation, the amazingly beautiful and harmonious architectural monument, is particularly notable. A few years ago, the old Cossack cemetery was restored in Moudros; it’s of great interest from an architectural ... Open »
Thassos
Temple of Apollo is another monument of antiquity located in Agora. Through the backdoor of the temple you can go down into the tunnel, which will lead you to the downtown area. According to archaeologists, this underpass was constructed in the 6th century BC. If the attractions of the city don’t seem enough for you, attend an excursion to the nearby town named Kavala. You ... Open »
Molyvos
For many years, Mithymna was widely recognized as the main Greek resort on Lesbos Island. However, the town has lost its popularity in recent years. The local beach doesn’t amuse tourists either. In the opinion of many, the beach is mediocre. It is covered with pebbles and has a sand surface only close to the Psiriara Bay. Of course, tourists can sunbathe and swim in the ... Open »
Kavala
Any street in Kavala will bring you to the top of Simbolo Mountain. The main sight of the town – a Byzantine fort – is located there. This fort is interesting not only by its medieval halls and high towers but also by a spacious park that surrounds the building. Numerous old houses can be found is the old part of the town. Everything in Kavala simply dives in greenery and ... Open »
Lesvos
Lesvos attracts people by its abandoned beaches and large villages made of stone. The settlements in Lesvos have much from Arabian towns with their compact towns with upper floors hanging above the street. Among the most famous sights of Lesvos are Mytilini with its narrow streets, an antique theatre, and Museum of Archeology. Akrotiri village is the location of the museum ... Open »
Alonissos Island
An interesting object to visit is the information center MOM that tells visitors about the specific form of mammal, the monk seal, which is the principal inhabitant of the national park. The National Marine Park itself, of course, is the most visited and famous attraction of Alonissos. It was founded in 1992. A vast nature reserve occupies the eastern part of the territory of ... Open »

All about Lemnos, Greece - sightseeings, attractions, touristic spots, architecture, history, culture and cuisine. Prepare your trip together with OrangeSmile.com - find out the 'must see' things in Lemnos, which places to visit, which excursions to take, where the breathtaking views are waiting for you. Planning your trip with this travel guide will help your to get the most out of Lemnos in few days.