Sightseeing in Seriphos Island - what to see. Complete travel guide 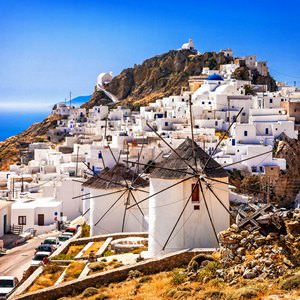 The Greek island of Seriphos began to attract active travelers quite recently. It doesn’t differ with well-developed tourist infrastructure, but at the same time there are both comfortable hotels to stay and lots of interesting places to walk. There are several attractive beaches featuring pristine natural beauty on the island.
Authentic traditions, festivals and lifestyle of Seriphos Island inhabitants
Greeks are quite sociable and emotional people by their nature. On Serifos, you will repeatedly see the communication between local residents who raise a voice, use gestures and interrupt …

Open
The capital of Seriphos and the location of the most important attractions of the island is the town of the same name. The old castle on a hill surrounded by lots of different buildings has partially preserved there. The lovely church of Agios Konstandinos is one of those buildings; it’s among the most spectacular monuments. It’s noteworthy that the historic district of Seriphos is located in a beautiful mountain area, so travelers have an opportunity to admire the surrounding scenery while exploring the historic sights.
Ayiou Athanasiou square is the center of the capital; there are some interesting historical monuments around it. Here you can see a tiny church built in full compliance with national traditions, as well as the old town hall building. One of the spectacular historic buildings houses Stou Stratou cafe that is also the local attraction. Several windmills have survived in the vicinity of the capital; they can also be included in the recreation program. Since ancient times archaeological work hasn’t stopped on the island; the findings of scientists can be found in the local Archaeological Museum. Copyright www.orangesmile.com
Excursion over cultural sights of Seriphos Island - 'must visit' points of interest
Locals believe that the legendary Cyclops Polyphemus who was deceived by the treacherous Odysseus lived on Serifos. There is neither confirmation of this point of view, nor, however, its …

Open
An important religious object is in the immediate vicinity of the small Galani village. We are talking about the beautiful Monastery of the Archangels. This old monastery is famous for its artful decoration; many unique religious artifacts and paintings have preserved there. A part of the monastery is now converted into a museum representing a rich collection of old books and manuscripts. Another important religious landmark can be found in the village of Panagia; there you can see the beautiful Church of Our Lady. The church is located on a small hill; the age of former is more than thousand years. 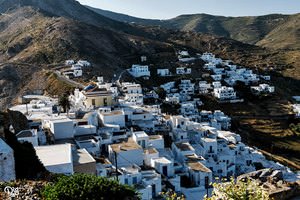 Walks in the ancient village of Koutalas are popular among excursion lovers; there are the ruins of the Kastro tis Grias Castle. Many interesting legends are associated with this historical monument; in Greek name of Kastro tis Grias means the castle of the old woman. Nearby is the outstanding natural attraction, the Cave of Cyclops. According to one of the myths, bloodthirsty Cyclops who kidnapped locals lived in this cave in ancient times.
Your active city break in Seriphos Island. Attractions, recreation and entertainment - best places to spend your day and night here
Serifos will definitely appeal to those who like hiking. There are many interesting cultural and natural sites that link together as well as well-maintained asphalt roads and narrow dirt …

Open
In the 11th century active mining of iron ore was conducted on the island; some of the places have survived to our times. Numerous old villages, which have been preserved on the island, are of great interest. Almost all of them managed to preserve monuments of past centuries and unique atmosphere of national color. 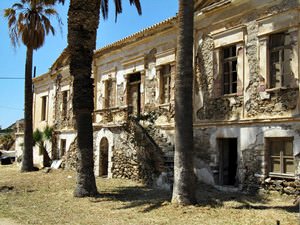 Acquaintance with local delicacies and gastronomic traditions is an essential part of every vacation on Seriphos. Local taverns offer various interesting dishes that are not available in any other region of Greece. Louza is a popular meat delicacy. It is cooked from smoked pork meat with various spices. Vegetarian guests will be in love with revifada. It is a popular national chickpea dish that locals eat on an everyday basis.
Top hotels in Seriphos Island for business trip or short vacation
A selection of hotels on the island of Seriphos is more than decent. Apartments are widespread, but there are several luxury beach hotels. Very unusual accommodation place is Coco-Mat Eco …

Open
Various types of cheese are an essential part of the local gastronomic traditions. Cheese is often served together with wine. Some types of cheese are used in pies, and some are added to various salads. Seriphos is also famous for its delicious honey that is then used in various pastries and desserts. During gastronomic tours, travelers can visit local farms and apiaries where they will certainly be offered to try the most delicious locally sourced food. 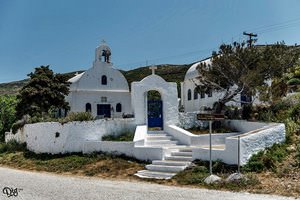 Almond is another important symbol of Seriphos. There are several large almond plantations on the island, and travelers can visit them during excursions. Small packages with almond are also a popular souvenir that tourists enjoy buying. Finally, it is important to mention local wineries. According to wine connoisseurs, local wine produced on Seriphos is close to the classical Crete wine. Serfiotiko is the most popular local variety of the drink. It is possible to buy it in virtually every grocery shop on the island.

This guide to iconic landmarks and sights of Seriphos Island is protected by the copyright law. You can re-publish this content with mandatory attribution: direct and active hyperlink to www.orangesmile.com.
Seriphos Island - guide chapters 1 2 3 4 5 6 7 8

City tours, excursions and tickets in Seriphos Island and surroundings

Survived castles around Seriphos Island
♥   Castle 'Exomvourgo Fortress' Exomvourgo, 75.2 km from the center. On the map

National and city parks around Seriphos Island
♥   National Park 'Ethniko Parko Schinia Marathona' , 119.2 km from the center. On the map

Search touristic sites on the map of Seriphos Island

Sightseeing in regions nearby Seriphos Island

Sifnos Island
This town is considered the most scenic and picturesque on the island, because of its original architecture. Streets of the village consist of small snow-white houses with brightly decorated balconies. The center of the old village area is Platia Iroon, next to which there is one of the most visited cultural sites of the island, the National Museum. Nearby there is the lovely ... Open »
Syros
Another popular place is the Italian restaurant Amvix; it is recommended to those who can’t imagine a meal without pizza or classic pasta. In addition to delicious homemade pasta, the restaurant serves excellent meat dishes. Reasonable prices and attentive service will be a welcome addition to a dinner. There are also attractive cafes in Hermopolis; Jar is a cozy and ... Open »
Milos Island
The largest settlement and the former capital of the island is the town of Adamas; the lovely Church of the Holy Trinity is among its historical characters. The Mineralogical Museum stands out from cultural venues; it offers visitors a rich collection of minerals that have been discovered in different periods of exploring the island. The ancient French cemetery, where soldiers ... Open »
Paros
One of the oldest settlements of the island is Lefkes. Many buildings here were built in the 16th - 17th centuries. The most notable building of Lefkes is Agia Triada Church. This is a beautiful building made of white marble, which differs from the low buildings that surround it and resembles a magnificent palace. Speaking of beach vacations, it is worth mentioning the high ... Open »
Folegandros Island
This Greek island will appeal to fans of excursions, as there are many interesting places to explore. The main historical symbol of Chora is the old Venetian fortress built on top of a cliff. The walls of the fortress hide streets of the old town, where you can see a lot of charming residential houses and associated facilities. In the immediate vicinity of the fortress, there ... Open »
Tinos Island
It should be noted that the church is interesting not only for its religious artifacts, as it’s the most beautiful architectural monument of the island. The church is located in the center of the capital city of Tinos, on a high hill. You can climb to the top of the hill using the marble staircase, which is also considered an important landmark. Here, on the stairs, pilgrims ... Open »

All about Seriphos Island, Greece - sightseeings, attractions, touristic spots, architecture, history, culture and cuisine. Prepare your trip together with OrangeSmile.com - find out the 'must see' things in Seriphos Island, which places to visit, which excursions to take, where the breathtaking views are waiting for you. Planning your trip with this travel guide will help your to get the most out of Seriphos Island in few days.