Sightseeing in Patmos Island - what to see. Complete travel guide 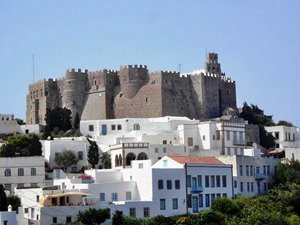 Patmos is one of the smallest and most attractive islands of Greece. It features amazing religious sites, rocky desert landscapes, as well as incredibly beautiful beaches. Patmos is one of the most secluded and tranquil islands of Greece, so many travelers visit it only during sightseeing tours. Vacations on this beautiful island will give a lot of impressions for those who like to spend time away from the noisy city and can’t imagine good rest without beach activities.
Your active city break in Patmos Island. Attractions, recreation and entertainment - best places to spend your day and night here
On Patmos, there is something to do besides visiting historical and architectural monuments. For example, you can rent a boat and go on a short excursion along the coastline for the sake of …

. It’s considered that St. John the Divine has written his Revelation there. Currently, the cave is home to two ancient churches, one of which was named after St. Anne. That’s the religious site of great importance, so thousands of tourists come from all over the world to see it. The cave resembles a real religious museum with a huge amount of priceless artifacts.
Close to the legendary cave the Monastery of St. John the Divine is situated. According to historical data, it was founded in 1088. Almost a thousand years the monastery has being active, currently there are about forty monks serving in it. There are also countless religious artifacts, including ancient manuscripts of Sakkelion, the famous monk from Athens. The monastery has an extensive library, including more than 3,000 books and about 1,500 manuscripts. Many books in the library are unique. Interesting excursions are arranged in the library every day. Copyright www.orangesmile.com
Best beaches and recreation areas around Patmos Island
Skala is the busiest and the noisiest place on the island; there are always a lot of people and a lively atmosphere. There are attractive taverns and bars on its sandy well-equipped beach. …

Open
The port town of Skala can boast The Monastery of Zoodochos Pigi that is open to the public. All visitors can stroll through its territory and get acquainted with the way of life of nuns. In the immediate vicinity of the city there is another monastery, Evangelismos, that is of great interest from architectural point of view. The Monastery of Profitis Ilias can be found on the highest mountain of the island; after the tour visitors will have a great opportunity to enjoy the spectacular views of the island. In good weather, not only remote areas of the island, but also the nearby island of Leros, as well as the coast of Turkey are visible from the monastery. 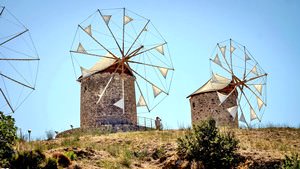 It would be interesting to visit the hill Castelli, where scientists have discovered the ruins of the ancient city. According to one version, the first capital of the island, Chora, has towered on a hill many hundreds of years ago. The ruins of some buildings, including part of the fortification wall and three towers, as well as the Temple of Apollo have survived to the present day.
Top hotels in Patmos Island for business trip or short vacation
Standalone hotels of Patmos will surprise guests with an atmosphere of coziness and national colour. Patmos Aktis Suites & Spa occupying a complex of white stone buildings is considered one …

Open
The port town of Skala is the largest settlement on the island; the town is ideal for hiking. On every street you can see amazing buildings in traditional style; some old houses today serve as amazing shops and taverns. The house of Emmanuel Xanthos is considered the regional point of interest. Its owner was one of the outstanding public figures, the founder of the secret society Filiki Etheria. Despite the fact that the island of Patmos doesn’t differ with various natural landscapes, a selection of interesting places for walking is very large. Nature lovers will be impressed by desert landscapes and beautiful rock formations, as well as an abundance of high hills providing amazing view of the island. 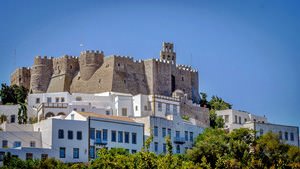 Patmos Island is a fantastic area for everyone who likes beachside recreation. Grigos is considered the most famous resort destination on the island. It is located near the bay that has the same name. Guests of the settlement are welcome to relax on a picturesque sandy beach that is very shallow and calm, so travelers with children can hardly find a better place to relax. Taking into consideration popularity of the resort, the beach is always quite crowded. Tourists, who seek a calmer atmosphere, will not be disappointed with the nearby Kalikatsou beach. The beach near Diakofti Village is also perfectly suitable for peaceful sunbathing.
Family holidays with kids in Patmos Island. How to entertain your child, things to show to children.
Patmos is quite suitable for a quiet, secluded family holiday. Though, there are no water parks or large amusement parks here, the tourist infrastructure, in general, is well developed due …

Open
Charming taverns have become a true landmark of the island. These taverns are run by locals. Each of these venues offers national food cooked in accordance with traditional family recipes. Some taverns of Patmos are famous far beyond the borders of the city. Panagos is a great example of such tavern. Located not far from Kampos Beach, the tavern is open all year round. It is open in a beautiful historical building and famous not only for its signature dishes but also for a rich collection of old photographs.

This guide to iconic landmarks and sights of Patmos Island is protected by the copyright law. You can re-publish this content with mandatory attribution: direct and active hyperlink to www.orangesmile.com.
Patmos Island - guide chapters 1 2 3 4 5 6 7 8

Survived castles around Patmos Island
♥   Castle 'Monastery of Saint John the Theologian' Patmos, 2 km from the center. On the map

Search touristic sites on the map of Patmos Island

Sightseeing in regions nearby Patmos Island

Leros Island
To the east of Platanos there is the ancient Castle of Leros, a massive and beautiful fortification that protected the island from invaders. Among local religious sites the Church of Christ the Savior is noteworthy. That’s a gorgeous architectural monument built to meet the most vibrant national traditions. One of the oldest religious buildings on the island is the Church of ... Open »
Ikaria Island
Many important sights can be found in the capital of the island, Agios Kirikos. The Archaeological Museum, as well as the Agios Kirikos Monastery that is one of the oldest on the island operates there. The important archaeological site, where the antique acropolis has being hundreds of years ago, is not far from the capital. A great place for hiking is the port city of ... Open »
Kalymnos Island
The seat of the most popular museums is Pothia; the amazing Archaeological Museum is situated there. It represents precious findings of scientists discovered during the exploration of the island. Nearby is the Maritime Museum, whose collection also strikes with abundance of unique artifacts. You should definitely look into the Ethnographic Museum of Pothia that offers visitors ... Open »
Samos
Among the resort areas of the island the most significant ones are the following towns - Pythagorio, Karlovassi, Vatha and Kokkari. Pythagorio is located on the southern coast of the island and is famous for the fact that many years ago the great Pythagoras lived in this ancient town. Even though only ruins remained from the ancient town, tourists keep coming to see the ... Open »
Amorgos Island
The picturesque settlement of Katapola is the main port of Amorgos. These places will be interesting to those who have long dreamed of walking along archaeological areas. Earlier there was an ancient city of Minoa; elements of numerous old buildings prove its existence. The main symbol of the port town is the beautiful church of Panagia Katapolyani built in keeping with local ... Open »
Kos Island
There's also a bunch of Medieval landmarks on the island, including Ioannite Knights castle. It was built in 14th century on site of old Byzantine fortress ruins. Construction lasted until early 16th century, but in 1514 it was conquered by Turks. Defensive structures have partially survived until nowadays; there's a number of viewing points set up around the castle today. ... Open »

All about Patmos Island, Greece - sightseeings, attractions, touristic spots, architecture, history, culture and cuisine. Prepare your trip together with OrangeSmile.com - find out the 'must see' things in Patmos Island, which places to visit, which excursions to take, where the breathtaking views are waiting for you. Planning your trip with this travel guide will help your to get the most out of Patmos Island in few days.