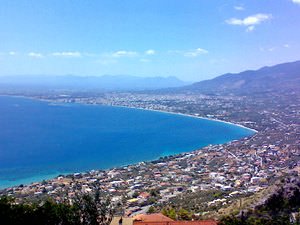 Kalamata is a city with an ancient history. According to old annals, the city existed during the life of Homer, legendary poet of ancient Greece. Despite the fact that the city was damaged heavily several times, it still has many important religious landmarks. The castle built by Francs in the 13th century is one of these landmarks. Currently, the castle is in ruins, but it is still very interesting to visit this area. As the ruins are located on a hill, tourists can enjoy a marvelous view of the city and neighborhoods.
Your active city break in Kalamata. Attractions, recreation and entertainment - best places to spend your day and night here
Kalamata is famous not only for its premium olive oil and ancient buildings but also for excellent beaches that are perfect for recreation. Without a doubt, Kalamata Beach is the most …

Open
The central Vassileos Georgiou (King George) square is a must-visit destination that tourists should definitely not neglect. First of all, it is the right place to feel the magic atmosphere of the city. There are also many old buildings nearby, so it is a great destination for all fans of architectural landmarks. The city’s cathedral is, perhaps, the most grandiose landmark in the area. It was built at the end of the 19th century on the site of a destroyed old church. During the construction works, an ancient icon was found here - the Panagia Ypapanti who is the Protectress of the City of Kalamata. It is a precious artifact not only for Christians but also for historians. Nowadays, the icon is exhibited in the church, so everyone is welcome to look at the relic.
Kalograion Monastery is one more important landmark in the city. It is a convent, nuns of which are famous for their handicrafts. For centuries, they have polished their skills of working with silk and producing scarves, wraps, and neckties. If you visit this monastery during an excursion, you will not only learn more about its rich history but will also see skilled masters at work. Of course, it is possible to purchase gorgeous handmade items made of silk. An interesting museum has been opened in the monastery in recent years. It exhibits the best works of nuns. Copyright www.orangesmile.com
Advices to travellers: what you should know while being in Kalamata
1. Tourists will not suffer from the language barrier in Kalamata. Many establishments have information written in English. It is also not hard to find English-speaking guides in museums and …

Open
The oldest church in Kalamata, Agioi Apostoloi or the Church of the Holy Apostles, is a cult place for residents of Kalamata. Built in the 13th century AD, the church amazes its numerous visitors with its strict and laconic lines. That being said, Greeks honor this ancient landmark not because of its look but because of its role in the creation of the country. In 1821, rebels’ chiefs made a vow to free their home country from Turkish expansionists exactly in this church. That is why Kalamata is considered the cradle of the independence movement in the country. Quite an interesting fact – before Greece joined the European Union, the country’s 500 drachma note had an image of Agioi Apostoloi in it. 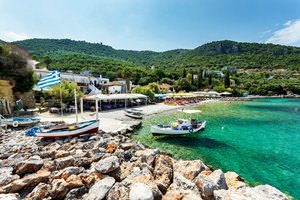 Fans of ancient history will find it very interesting to visit the Archaeological Museum of Kalamata. It exhibits a range of artifacts that cast the light upon the major events in the ancient Greek and Medieval history. Remarkably, many of these items were found in the suburbs of the city, but the museum exhibits relics found in different regions of the country. A large part of the exhibition is dedicated to the culture and art of Greeks. Among the most precious artifacts, there are bas-reliefs and sculptures, the age of some of which is more than 1,500 years. The museum’s building itself is very interesting. In the past, it was a mansion that belonged to the rich Benakis family. The building still hasn’t lost its aristocratic charm.
Extraordinary weekend in Kalamata - unusual places, services and attractions for travel gourmet
…

Open
The Kalamata Military Museum opened relatively not long ago – in 2006. However, this fact doesn’t make this museum less interesting or attractive. It is open in a building that is a true architectural landmark and a wonderful example of the neoclassical style. The museum’s collection is dedicated to the history of Greece starting from 1821, in other words, from the start of the war for independence, and until our days. As it is not hard to guess from the name, the majority of artifacts belong to the military theme. In the backyard of the museum, visitors can see genuine models of military equipment, such as F-5A aircraft, antiaircraft mountings, and a tank. By the way, it is possible to listen to the excursion in English. 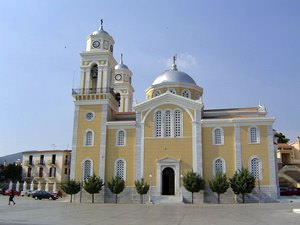 The Railways Park is one more interesting place that tourists like to visit. It is open in the central park of the city. The open-air exhibition is located on the site of the old Kalamata-Limit railway station. It is recognized as the largest and the most interesting collection dedicated to this theme in Greece. The exhibition includes the historic building of the station, platforms, water-tower, and several types of railway transport of different constructions. Moreover, the museum complex includes two athletic fields, playgrounds for children, and a small café.
Guide to Kalamata sightseeing - things to see and to visit
Kalamata is a small Greek town with rich history located just 250 kilometers away from Athens. Just like in the majority of Greek towns, the climate in Kalamata is mostly Mediterranean. On …

Open
In the neighborhood of Kalamata, there is a unique natural landmark that definitely deserves a visit – Diros Caves. These caves have multiple exits in many regions of Greece and lay many meters below the ground level, so Diros Caves are recognized among the largest in the world. Ancient Greeks believed that Diros Caves were the entrance to the Hades’ underworld kingdom. It is better to explore stone grottoes together with a guide – it is easy to get lost in the winding paths. The caves look truly spectacular inside – fancy stalactites and stalagmites, and underwater lakes that are suitable for a boat ride.

In the section below, you can get one of our excursion, activities or city discovery tours over Kalamata and surroundings. Our website offers 10-30% lower ticket prices, when compared to the offline purchase on the spot.

This guide to cultural sights Kalamata is protected by the copyright law. You can re-publish this content with mandatory attribution: direct and active hyperlink to www.orangesmile.com.
Kalamata - guide chapters 1 2 3 4 5 6 7
Car rental on OrangeSmile.com 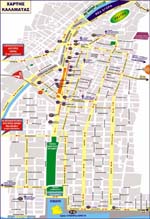 Photogallery of cultural heritage of Kalamata

Excursions over cultural sights of neighbours of Kalamata

Spetses Island
The troops of the rebels gave the fight to the Turkish squadron near the shores of Spetses in 1822. The battery located at Palio Limani played an important role in the battle. Guns are still in their places as they were 2 centuries ago. Not far from the battery you can find a chapel with frescos, illustrating the battle. There is also a bust of the Count Alexei Grigoryevich ... Open »
Attica Region
The Postal and Philatelic Museum of Greece presents a very interesting exposition; besides the stamps, here you can see the various mechanisms and devices that were used by the Hellenic Postal, Telegraph and Telephone Services. The museum is located next to the Panathenaic Stadium and is open on weekdays. Actually, Athens is an open-air museum. If you go up to one of ... Open »
Hydra Island
Hydra is known as a source of inspiration among artists. There are many talented artists among locals. You can visit Melina Merkouri Hall and admire the works of Greek masters and know more about their life. It was named in honour of Greek actress and politician Melina Merkouri. There are exhibited various works of artists and you can also attend different master classes ... Open »
Loutraki
In the vicinity of the city, there are many interesting Christian attractions. On the top of the Gerania Ridge Mountain is the ancient monastery Moni Osiou Patapiou. To climb to it, one will need to overcome a steep stairway of 144 steps. The history of the foundation of this monastery is pretty interesting. In the 13th century, a young hermit named Potapius settled in one of ... Open »
Agistri Island
Megalochori or Milos, the capital of Agistri, is rich with various attractions. Many tourists are attracted by a large windmill, which can be found in the central part of the settlement. What's interesting, the mill is the only construction of this type on the Agistri and nearby islands. The windmill was built in 1812, and more than a century was used for its intended ... Open »
Zakynthos
St. Mark’s Square is located right at the foot of the hill. There are also several attractive sights not far from it. Don’t forget to attend the Church of St. George. Yet at the beginning of the 19th century, the church was regularly hosting important divine services and religious events. Solomos & Kalvos Museum, which is named after two great poets, is located nearby. ... Open »

Culture guide to Kalamata. Which fascinating sights to visit once you are in Kalamata: temples, churches, museums, theaters and castles. Recommendations (with addresses, phone numbers and links) on the places 'must visit' in Kalamata. Plan your own city excursion by using this page info!