Video of flights over top monuments of Venice in HD format.
Use 'Full Screen' mode.
The cultural capital of Italy - Venice – never ceases to attract travelers by dozens of iconic architectural and cultural landmarks. St Mark Basilica, San Giorgio Maggiore, La Fenice, and San Zaccaria is, by far, not the complete collection of objects of interest. In this review, we will try to include descriptions of the most important architectural landmarks of Venice. We accompany them with interesting facts, colorful photographs, and 3D virtual tours. These 3D tours allow you observing the landmarks from a bird’s eye view. Simply turn on the HD video and enjoy the flight! 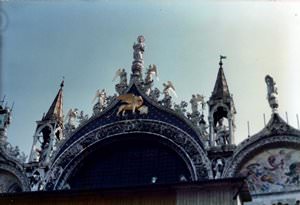 Facts:
» St Mark Basilica is the cathedral of the Roman Catholic Archdiocese of Venice.
» That’s most famous of the churches of the city and one of the best known examples of Byzantine architecture in Western Europe.
» Since the 9th century, the basilica was known as the Golden Church and was the symbol of Venetian wealth. It owed its second name to luxurious furnishings and golden mosaics.
» The cathedral has a free-standing bell tower of about 100 meters height. The tower has an observation deck.
» St Mark Basilica has the treasure house that currently stores 283 items. Collection consists of numerous treasure caskets for relics, chalices and other church utensils brought from the East or donated by popes. 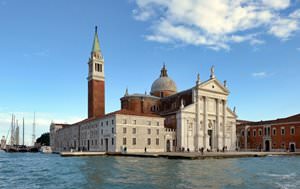 Facts:
» San Giorgio Maggiore is located on the same island right in front of Piazza San Marco.
» The bell tower is 75 meters in height; that’s the square brick tower.
» The main gable of the cathedral is decorated with statues of Christ and the Holy Archangels, George and Stephen.
» Interior of the cathedral impresses with its rigor and lighting.
» The most impressive thing in the church is the bronze altar depicting God and the four evangelists, supporting the globe, as well as the organ created in 1750. 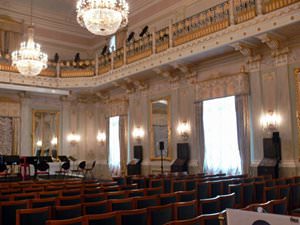 Facts:
» La Fenice is the Opera House, which opened in Venice in 1792. Name of the theater is literally translated as ‘phoenix’.
» The theater has got its name due to the fact that it was restored twice; for the first time after a fire in 1774 and the second after the litigation.
» Today the theater is one of the most prestigious in Italy and Europe.
» Interior decor of La Fenice is a lot like decor at La Scala.
» Two of the 10 operas by great Vincenzo Bellini have been specially written for the theater; those are The Capulets and the Montagues and Beatrice di Tenda. 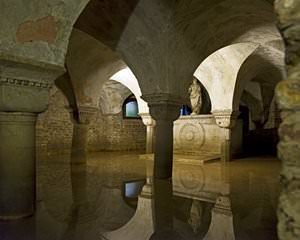 Facts:
» San Zaccaria is the Catholic church built in the 9th century to hold the relics of St. Zacharias (father of John the Baptist).
» Facade of the Church is one of the most wonderful examples of Venetian architecture of the early Renaissance.
» The church can boast the real masterpiece, the painting by Giovanni Bellini, Madonna and Child with Saints, that can be found above the second altar to the left of it.
» The church has two chapels, San Tarasio and the chapel of St. Athanasius. The first chapel has the altar of the old church, where the waterlogged crypt houses the remains of eight doges who ruled from 836 to 1172 years.
» The second chapel of St. Athanasius was originally the central part of the church, and in 1595 it was converted into a chapel. 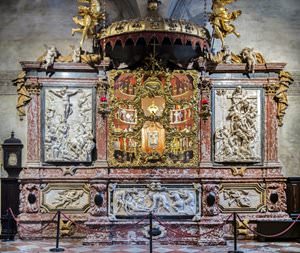 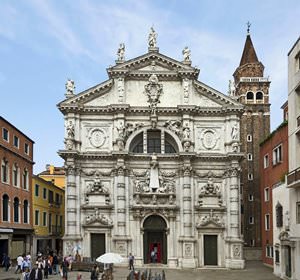 Facts:
» San Moise is the parish baroque church in Venice.
» Facade of the church is overloaded sculptures and ornaments and sings the commercial successes of the contributors to the restoration of the church.
» It should be noted that the original composition was even more overwrought, but a few sculptures have been lost over time. In the 19th century the state of the facade was worrisome and because of the heavy load it was decided to make it easier, so part of jewelry and sculptures were removed intentionally.
» The tomb of the Scottish financier John Law, as well as many paintings of 17th and 18th centuries can be seen in the nave of the church of San Moise.
» The vintage bell and the pipe organ of the church deserve special attention. 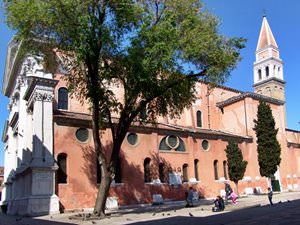 Facts:
» The name of the church of San Francesco della Vigna comes from the vineyard on the site where it was built in 1534.
» Interior of the church combines simplicity and austerity, as Franciscan churches use to.
» Some doji (Head of State): Andrea Gritti, Marcantonio Trevisan, Francesco Contarini, Nicolò Sagredo and Alvise Contarini were buried at the shrine.
» The church houses such masterpieces as Giovanni Bellini's Madonna, as well as Child with Saints and Madonna and Child by Antonio Negroponte. The temple also can boast The Holy Family with Saints by Paolo Veronese.

Facts: » St Simeon Piccolo is the small church built in the 13th century by the architect Giovanni Antonio Skalfarotto.
» The church is a building propped up by pillars. Externally it looks very similar to the Pantheon in Rome.
» A huge dome of the church is covered with copper of a very unusual color. The statue of Christ the Savior is decorating the dome.
» Due to the small size of the building and its huge dome, Napoleon once made fun of the architecture of the church, telling, “I have seen the church without domes, but until now I have never seen the dome without the church.”

Build your walking routes in Venice on the landmark map

Architectural landmarks in the regions around Venice