Sightseeing in Olbia - what to see. Complete travel guide 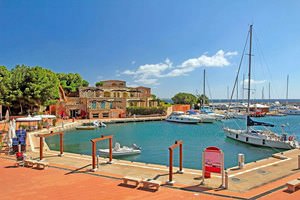 Olbia is the capital of the historical region of Gallura in Italy. This is a city with an incredibly rich historical past and interesting national culture. Since ancient times, many architectural landmarks and shrines of different epochs have remained in the city. Life doesn’t stop in Olbia either in the daytime or at night. Corso Umberto, the main street in the city, is the primary destination for bars, restaurants, and entertainment venues. In the historic city center, tourists find themselves in the kaleidoscope of streets with numerous boutiques, jewelry shops, souvenir shops, and nightclubs. The neighborhoods of Olbia are no less interesting. They offer a range of opportunities for active recreation.
The history of Olbia started yet during the prehistoric time. According to historic data, the Carthaginians founded a settlement on the site of modern Olbia at the edge of the 6th and 7th centuries BC. That being said, there is evidence that Nuragic people were the first settlers in the region. There are traces of this ancient civilization in the Italian region that date back to the 8th century BC. Over the years, the Phoenicians replaced the Carthaginians, but their reign was not long as well. The Romans conquered the settlement and turned it into a large seaport.
The Roman Empire period was a golden age for Olbia. The town was developing actively and establishing business connections with other countries. The Romans even managed to build a naval base in the town. This base was safely protecting the settlement from the sea attacks. Over the centuries, the city changed its name several times. Olbia was the first name of the city. The settlement was called this way from the moment of foundation and until the Middle Ages. By the way, the name means “lucky”. After that, the city’s name was changed to Civita. The Italian settlement changed its name once again in the mid-18th century, this time to Terranova. The city returned its original name only in the 20th century. Copyright www.orangesmile.com
The Basilica of San Simplicio is the main religious sight in Olbia. The shrine is dedicated to Saint Simplicio, the first bishop in the region. Many local people still honor him and consider Simplicio the city’s patron saint. The church was built in the 11th century. This is a fabulous example of the Romanesque Pisan architectural style. The shrine is comfortably located on a high hill, so it is not hard to find it – the basilica’s roof is visible from all parts of the city. 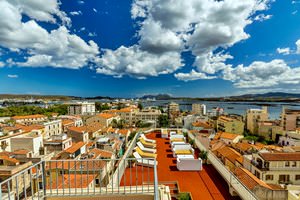 Initially, there was a Christian church on the site of modern basilica. This shrine dated back to the 7th century. When the city’s government decided to build a new church on the site of the old one, they used large granite blocks to make the building solid and durable. The intention was to select the material that could last several millennia. The basilica almost doesn’t have any inner décor and looks quite modest inside. Frescoes in the central part of the apse are in striking contrast with the gloomy walls of the shrine. These frescoes feature the city’s patron saint – Simplicio – with holy martyr Victor.
Would you like to see the ancient ruins of an old edifice complex? In the vicinity of Olbia, tourists can visit an interesting monument of the prehistoric time – Nuraghe Riu Mulinu. This complex is built on a local mountain called Cabu Abbas. The fortification is built on a height of roughly two hundred and fifty meters. Riu Mulinu is very old – this complex was finished in 1300 BC. Nuraghe Riu Mulinu consists of several nuraghe – granite towers. The central tower is the main, and other towers are subsidiary. The total length of the wall protecting this ancient complex is almost two hundred and twenty meters. 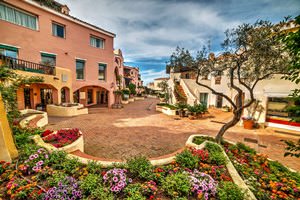 Having got to the top of Cabu Abbas, travelers can see a striking view of the surroundings and the bay. For a long time, scientists couldn’t understand the purpose of the fortress. After numerous discussions, they agreed that this was an important strategic post. The main purpose of the fortress was to guard the sea and to repel possible attacks of enemy ships. A bronze statuette of a woman with an amphora with water placed on her head was discovered in Riu Mulinu in 1936. There is also a two and a half meter deep well in the central tower. This proves the existence of the ancient cult of water among the first settlers in this region.
There is an airport five kilometers south of Olbia. This sea gate receives many domestic flights from large Italian cities. There may be charter flights to Olbia airport from other countries during the tourist season. Public buses take passengers to the city center from the airport. Of course, it is always possible to rent a car and travel independently. A train from Cagliari with a change in Chilivane will take you to Olbia within four hours. A train ride from Sassari will be shorter, only one and a half hours, and only twenty-five minutes when traveling from Golfo Aranci. Finally, there are also daily ferries to the Italian resort from such cities as Genoa, Civitavecchia, and Livorno.
This guide to iconic landmarks and sights of Olbia is protected by the copyright law. You can re-publish this content with mandatory attribution: direct and active hyperlink to www.orangesmile.com.

Survived castles around Olbia
♥   Castle 'Castel sardo' Castelsardo, 66.2 km from the center. On the map

Sights around Olbia from our guide 'Extreme places on Earth' 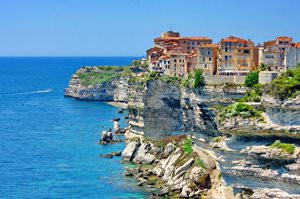 Distance from Olbia center - 66.9 km.
The Church of Saint-Marie-Majeure is the main religious attraction of Bonifacio. The exact date of its construction is also unknown. But the unique architectural style of the church indicates that it was built in the 13th century. The Marin cemetery is a special attraction. It was founded more than 300 years ago. It is of great value from an architectural point of view today. Many famous town figures are buried in this cemetery. … Read further

Search touristic sites on the map of Olbia

Sightseeing in regions nearby Olbia

Porto Cervo
Romazzino Beach is another coastal area perfectly suitable for trouble-free recreation. This beach is located in a bay, and so it is safely protected from the strong winds. A calm and peaceful atmosphere reigns in Romazzino. The local hotel has swimming pools, playgrounds, and regularly organizes different entertaining activities for children. Are you in the mood for ... Open »
Baja Sardinia
Sardinia is one of the most famous islands in the Mediterranean. This is a place with a long history that starts with the ancient Nuraghe up to the Phoenicians, Arabs and Romans. Currently the island belongs to Italy, but it has its own government. Simply everything is worth wondering on this island. You will find much fun exploring the culture of local people, their Sardinian ... Open »
Sassari
XVII century was notable mostly for the construction of the first University of Sassari. Later here appeared beautiful historic monuments - Princely Palace (now the city’s administration is located in it), St. Nicholas Cathedral, Giordano Palace decorated in neo-gothic style building, and the building of the province’s administration. In addition to the diversified ... Open »
Sardinia South
Along with archaeological sites, tourists may also visit various architectural landmarks including villa La Certosa. The snow-white building located at the sea shore belongs to one of the local politicians. It was declared an item of interest immediately after construction was finished. Those preferring natural places of interest may be interested in visiting Is Zuddas grotto ... Open »
Alghero
Do you plan to visit Alghero together with your loved one? In this case you might be interested in romantic and tranquil places perfect for couples. Spiaggia del Burantin Beach is one of these areas. This is an incredibly romantic place with a heart created by nature itself. The incredibly charming attraction of this beach is a result of a natural process – sandy bays ... Open »
Ajaccio
Ajaccio is a cozy and picturesque French town that is also known as the capital of Corsica. It is located in a small bay on the Mediterranean coast. This is not only a wonderful resort, but also a famous historical place as Ajaccio is a hometown of Napoleon. The central street of the city is created just along the coastal line. When you walk on it, you can enjoy not only ... Open »

All about Olbia, Italy - sightseeings, attractions, touristic spots, architecture, history, culture and cuisine. Prepare your trip together with OrangeSmile.com - find out the 'must see' things in Olbia, which places to visit, which excursions to take, where the breathtaking views are waiting for you. Planning your trip with this travel guide will help your to get the most out of Olbia in few days.