Sightseeing in Sassari - what to see. Complete travel guide 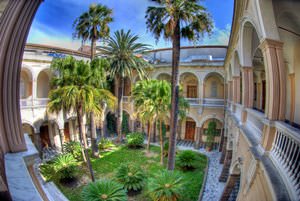 Sassari province is located on the northwest of Sardinia. The historical roots of this territory and the foundation of Sassari go deep into the Neolithic. The city itself passed through a short period of historical development that started in the Middle Ages. Sassari is considered a relatively young city. Due to fact the city has been ambushed very often, war architects, who have been building numerous fortresses to protect the island from pirate attacks, have made the major contribution to today's architectural monuments and places of interest.
XVII century was notable mostly for the construction of the first University of Sassari. Later here appeared beautiful historic monuments - Princely Palace (now the city’s administration is located in it), St. Nicholas Cathedral, Giordano Palace decorated in neo-gothic style building, and the building of the province’s administration.
In addition to the diversified cultural program Sassari offers a large selection of unique and interesting restaurants, bars and cafes, where you can try delicious dishes of the national cuisine. Shopping lovers will be happy to visit numerous luxury shops, where they will find clothes and shoes by the famous Italian couturier and designers. Copyright www.orangesmile.com
The ancient church of Virgin Mary of Bethlehem, whose construction began in the 12th century, is considered an original religious monument. The erection of the church extended into several decades, so nowadays, its appearance contains features of various stylistic directions. The facade is made in Romanesque style, however, some of its elements remind of beautiful Gothic and even Oriental traditions. During the Middle Ages, the interior design was supplemented with fabulous Baroque elements. The building of an ancient Franciscan monastery remained in the immediate vicinity of the church. 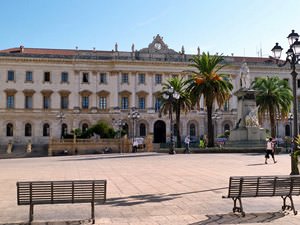 While walking along the historic district of Sassari, pay attention to the fragments from the old fortress walls. One of its largest fragments can be seen near Vico Avenue and the Trinity Avenue. Many defensive structures of the region were built in the 13th century. During the early Middle Ages, there were 36 towers. Only six survived to the present day. Turondola Tower is the most beautiful and interesting one. It is located next to the university square.
Castello di Sassari ancient fortress is one of the brightest medieval monuments. It was constructed in the 14th century to protect the coastal area. At the end of the 19th century, they decided to ruin the fortress and built a new square and barracks in its place. Only recently, during archaeological research, scientists discovered a complex system of underground spaces under the square, that used to be part of the old fortress. An active restoration of tunnels is in progress currently. Some of them can already be visited during the tour. 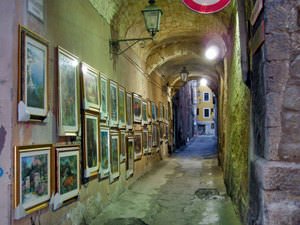 The most visited cultural institution in the region is the National Museum of Sanna. Its collection has a great many facets and is devoted to a wide range of aspects of history and culture. Of particular value are archeological finds. There are very beautiful cult objects, bronze jewelry, ancient weapons, and paleontological artifacts. Part of the museum is zoned for the storage of art objects. Visitors will be fascinated to see a marvelous collection of handicrafts. The founder of the museum is Senator Giovanni Antonio Sanna. It was he who sacrificed the first pieces from his private collection in 1931.
This guide to iconic landmarks and sights of Sassari is protected by the copyright law. You can re-publish this content with mandatory attribution: direct and active hyperlink to www.orangesmile.com.

City tours, excursions and tickets in Sassari and surroundings

Survived castles around Sassari
♥   Castle 'Castello di Sassari' Sassari, 0.2 km from the center. On the map

♥   Castle 'Castello Malaspina' Bosa, 48 km from the center. On the map

National and city parks around Sassari
♥   National Park 'Parco nazionale dell’ Asinara' , 42 km from the center. On the map

Sights around Sassari from our guide 'Extreme places on Earth' 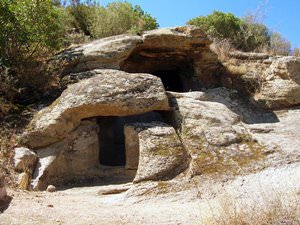 Distance from Sassari center - 69.9 km.
The houses carved in the stones are also remarkable for their interior design. On their walls you can see many mysterious symbols. According to the approximate accounts of the scholars, Domus de Janas were built in the period since 4th to 2nd millennium BC. With respect to the level of civilization at that time, one can imagine how complicated the construction process was. The travelers who visit this remarkable sight of Sardinia can make a magical ritual. In the middle of each cottage there are the little recesses, into which one presents the gifts for the fairies. … Read further 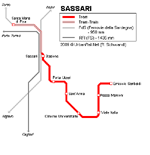 Search touristic sites on the map of Sassari

Sightseeing in regions nearby Sassari

Alghero
Do you like silence and calmness? Spiaggia della Speranza is the first beach to visit in this case. This is a wild beach so it is not crowded and perfect for everyone who craves for solitude. This beach is situated to the south of Alghero, not far from Bosa. It is very comfortable and pleasant to swim in this area – the bottom is soft and there are no sharp stones. Water is ... Open »
Sardinia South
The most interesting and probably the most mysterious place is the Su Nuraxi archaeological site located in Barumini area. Archeologists found over 7,000 stone pillars built more than 2.5 thousand of years ago. The site is not only extensive, but perfectly planned and finely built. Pillars survived until nowadays in excellent condition, though their purpose is still unknown. ... Open »
Olbia
The Basilica of San Simplicio is the main religious sight in Olbia. The shrine is dedicated to Saint Simplicio, the first bishop in the region. Many local people still honor him and consider Simplicio the city’s patron saint. The church was built in the 11th century. This is a fabulous example of the Romanesque Pisan architectural style. The shrine is comfortably located on ... Open »
Baja Sardinia
Sardinia is one of the most famous islands in the Mediterranean. This is a place with a long history that starts with the ancient Nuraghe up to the Phoenicians, Arabs and Romans. Currently the island belongs to Italy, but it has its own government. Simply everything is worth wondering on this island. You will find much fun exploring the culture of local people, their Sardinian ... Open »
Porto Cervo
Porto Cervo is well-known for its exquisite beaches. The coastal water has an amazing emerald shade that shines brightly in the sunrays. Liscia RujaBeach is one of the most popular choices when it comes to sunbathing and swimming in Porto Cervo. This is the longest beach on the southern side of Costa Smeralda. When visiting this tranquil place, it is so easy to forget about ... Open »
Ajaccio
Once you’re done with historical sights, you can take a ride on catamaran and enjoy Corsica views. Travelers, who enjoy active rest, may like visiting scuba diving schools that organize night dives and rides to national reserve zones of the coastline. Ajaccio will definitely charm you with its warm home atmosphere. You can visit the city just once and you will definitely ... Open »

All about Sassari, Italy - sightseeings, attractions, touristic spots, architecture, history, culture and cuisine. Prepare your trip together with OrangeSmile.com - find out the 'must see' things in Sassari, which places to visit, which excursions to take, where the breathtaking views are waiting for you. Planning your trip with this travel guide will help your to get the most out of Sassari in few days.