Sightseeing in Catania - what to see. Complete travel guide 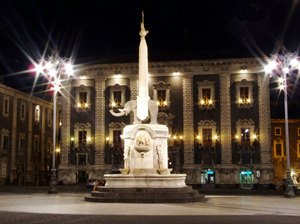 The city is located in the eastern part of Sicilia, just near Etna volcano. The life of the city is fully dependent on the mood of the glorious volcano. During its long history Catania has been simply buried under the layers of ash. However, due to hard-working and diligent inhabitants of this town, historical and architectural sights of the city were kept in safety.
Extraordinary weekend in Catania - unusual places, services and attractions for travel gourmet
…

Open
The ancient Roman theatre is the main architectural sight of this town. This facility can gather around 7 thousand of people. Nearby the theatre is located Odeon that has been used as the place of repetitions of male chorus. While making a walk on Piazza Stezicoro you can see the ruins of the ancient Roman amphitheater, the building of which took place in the 2nd century. The height of the ancient building was over 30 meters and the amphitheater’s diameter estimated 71 meter. Such a large-scale facility could easily seat 16 thousands of viewers.
One more picturesque square is named Duomo. Here is located a fountain made in the shape of an elephant. This huge and strong animal is the symbol of Catania starting from 1200. The choice of the symbol is logical as in ancient times there have been many elephants on the territory of the modern city. They protected the locals from wild animals and were true helpers in farming. Copyright www.orangesmile.com
Shopping in Catania - main shopping streets, outlets and boutiques
Via Etnea is the main shopping street in Catania. It has a length of approximately 3 kilometers. The street is nothing but an endless chain of popular shops, cozy restaurants, and charming …

Open
The largest religious sight of the city is Catania Cathedral, the building of which finished a thousand years ago.

Besides rich cultural program Catania offers its guests wide choice of entertainments. Tourists will find here a large choice of clubs and restaurants. Nightlife is so usual and ordinary here that many public houses work round-the-clock. Theatrical art connoisseurs will not get bored in Catania as well as there are 25 theaters in this city and each of them is ready to entertain its visitors every day. 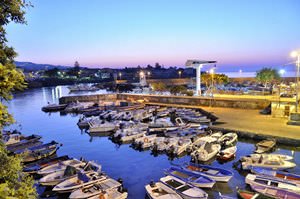 One of the main symbols of the city is the beautiful Cathedral of St. Agatha, named after the patroness of the city. The very first temple on this site was built in the 11th century. It was built on the ruins of the ancient Roman baths. The first temple was reminiscent of its military fortress. Despite the fact that the structure was powerful and reliable, the temple was completely destroyed twice during an earthquake. The cathedral, which guests of the city can see today, was built in the 17th century by a project of the famous architect D.V. Vaccarini. It is a striking example of Sicilian baroque.
Family holidays with kids in Catania. How to entertain your child, things to show to children.
Catania is considered to be an ideal place for outdoor activities and sports, a lot of exciting entertainment can be found here for tourists with children. They should definitely visit the …

Open
One of the most attractive places in the city for hiking is the historic Via Etnea. A significant part of the buildings on this street was erected in the 17th century. In those days, the city literally lay in ruins after another major earthquake. Many of the buildings represented here managed to preserve their original appearance. One of the main features of this street is the pavement. It is laid out with an unusual cobble of hardened lava, which was specially delivered to the city from the slopes of Etna. 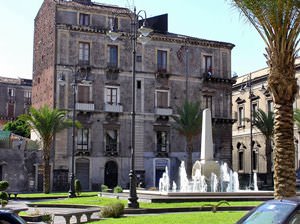 On the territory of the historical district of Catania is the Benedictine Monastery. It is one of the most famous landmarks of the city and a UNESCO World Heritage Site. The exact date of the construction of this monastery is unknown. Various sources say that it was erected at the turn of the 15th - 16th centuries. The monastery is a complex architectural complex. On its territory, there are many farm buildings and several churches. The historical building is not empty; it houses the University of Catania. The cells of the monks today are equipped with teachers’ cabinets, and the old churches were converted to classrooms.
Cuisine of Catania for gourmet with top restaurants and cafe
The local cuisine is a unique combination of Greek, Arabic, Spanish, and Italian culinary traditions. When it comes to describing the traditions of Arabic cuisine, it is definitely worth …

Open
Lovers of walks in historical places will surely like the majestic Castle of Ursino. It was built in the 13th century and does not cease to amaze with its impregnable air. Once, the fortress had a very important strategic importance. However over time, like many other medieval structures, it came to desolation. In the 30s of the last century, the fortress was completely reconstructed. Now it houses an interesting museum. Here is a large collection of archaeological finds, as well as works of art.

This guide to iconic landmarks and sights of Catania is protected by the copyright law. You can re-publish this content with mandatory attribution: direct and active hyperlink to www.orangesmile.com.
Catania - guide chapters 1 2 3 4 5 6 7 8 9

Shopping streets in Catania
♥   Shopping area ' Via Etnea' Catania, 1.2 km from the center. On the map

National and city parks around Catania
♥   National Park 'Parco nazionale dell’Aspromonte' , 98.7 km from the center. On the map

Sights around Catania from our guide 'Extreme places on Earth' 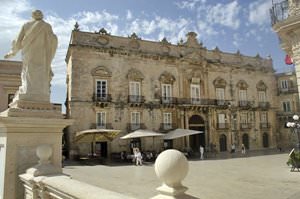 Distance from Catania center - 52.5 km.
Inside the palace is also decorated in Baroque. There you can see wonderful sculptures of Palermitano Lombardic Gregorio, and frescoes by Ermenegido Martorana. There were saved the huge crystal chandeliers made from Murano glass and other unique pieces of art. Nowadays the palace is in a private property and is closed for regular excursions. If you want to see the inner decoration of the palace, you have to clear beforehand the excursion with the owners. … Read further 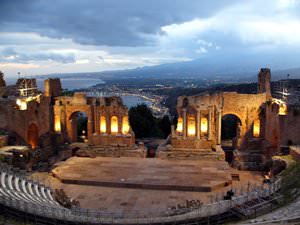 Distance from Catania center - 42.5 km.
Ballet performances, symphonic concerts and operas are just a part of the cultural events that regularly take place in the theater. Travellers who visit Taormina in October will be able to witness Giuseppe Sinopoli Music Festival, in which the best orchestras of the country take part. The amphitheater in Taormina is impressive in scale, its length is about 120 meters, the width is about 50 meters, and the height of the walls is about 20 meters. The preserved elements of the finish of the ancient building allow us to fully appreciate its former greatness. … Read further 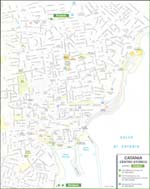 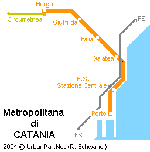 Search touristic sites on the map of Catania

Sightseeing in regions nearby Catania

Taormina
By the early 20th century, Taormina has already become the most visited and famous Sicilian resort. Beautiful beaches and amazing culture of the city make it irresistible in the eyes of many modern travelers. An incredible number of ancient monuments, as well as amazing medieval structures, have been preserved in the city and its environs. Guests of the resort can see its ... Open »
Ragusa
In 1738, the city’s authorities decided that the former church was too small for their city. It was decided to build a beautiful and big cathedral instead of the small church so that more people could attend it. In 1775, the cathedral was finally ready, and so both guests and citizens of Ragusa could admire a gorgeous Baroque cathedral that was dominating the skyline and ... Open »
Modica
In the museum, visitors can see interesting educational films dedicated to the full specter of chocolate making. Guests can also learn more about the old chocolate recipes. After a walk in the gorgeous halls of the museum and watching the film, it is incredibly pleasant to sample the delicious dessert. Having explored the exhibition of the chocolate museum, visitors can ... Open »
Calabria
There is a huge number of provincial towns and villages along the coast, each of which has something to surprise their guests. Travelling around towns allows visiting the most interesting historical sites of these places, as well as olive and mandarin groves, verdant meadows and azure coasts. The most famous town of the province is Tropea; the resort is located on the shore of ... Open »
Messina
First of all, this refers to ancient cathedrals, temples and churches, which are found throughout Messina. The Church of the Blessed Virgin Mary Most is the most large-scale complex of this place. The church was built in the 12th century on the site of an ancient pagan temple. The central part of the town is the location of Dome Cathedral, which was completed in 1160. This is ... Open »
Vulcano
One of the main attraction of Vulcano is the Master’s Valley. These are submontane districts covered with black volcanic sand. Here, you can see very rare plants that surprisingly grow on the ashes. Besides plants, there are unusual stones that resemble fabulous beasts with their outlines. The ascent of the volcano crater starts exactly from here. Too many travelers always ... Open »

All about Catania, Italy - sightseeings, attractions, touristic spots, architecture, history, culture and cuisine. Prepare your trip together with OrangeSmile.com - find out the 'must see' things in Catania, which places to visit, which excursions to take, where the breathtaking views are waiting for you. Planning your trip with this travel guide will help your to get the most out of Catania in few days.