Sightseeing in Monza - what to see. Complete travel guide 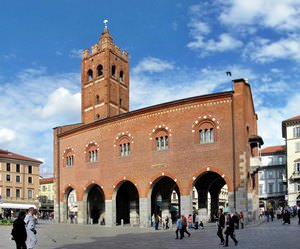 This town is located near Milan. Monza is well-known to all fans of Formula 1, because the main airfield is located here. First settlements on the territory of the town were founded during the Bronze Age; later this area was inhabited by colonies of Roman veterans. It is believed that they have given the city its modern name. These veterans were called Magutachi and moved from the area, which was called Magonza.
Authentic traditions, festivals and lifestyle of Monza inhabitants
Monza lives an eventful cultural life. During the year, a lot of interesting holidays and festivals take place here. In mid-June, the beautiful carnival dedicated to patron saint John the …

Open
Later the town became the residence of the king and his family, who were defeated by the great nature of this region. In the 6 - 7 centuries the town experienced a rapid growth, which was especially vivid during the Teodolinda queendom. By her order a beautiful cathedral was built in Monza. The cathedral became the repository of priceless treasures, the most famous and valuable item of which was Corona Ferrea. This was the crown which was traditionally used in the coronation ceremony of Italian emperors and kings, so the town, in which the crown was stored, was widely respected and considered a privileged one. However, up to 951 Monza was listed only as a castle in documents, and this place got the status of the town only during the reign of Otto III. Later the town repeatedly changed its status: it was in possession of the Belgian feudal lords, in the middle of the 16th century Monza was conquered by the Spaniards, and then the town was officially added to the territory of Italy.
Nowadays you can get acquainted with the history of Monza by visiting its numerous museums. You can take a tour to the cathedral mentioned above. Today it is called Duomo di Monza, and now the museum of treasures is opened in its walls. Another important architectural structure is the Royal Villa, which is located near the old chapel. Among the cultural institutions of Monza we should mention IL Teatro Theater and a unique library for blind people, which is famous for a large collection of books. You can also walk through the royal gardens and see beautiful old churches. Copyright www.orangesmile.com
Excursion over cultural sights of Monza - 'must visit' points of interest
One of the main historic symbols of Monza is a magnificent cathedral Duomo di Monza located in Piazza del Duomo. It impresses with its sophisticated architectural style and exquisite …

Open
Near the Monza Cathedral is the Town Hall built in the middle of the 13th century. For many centuries it was used for its intended purpose, as the seat of government. Today, the Town Hall is located in the heart of a colorful historical district, next to it you can see many buildings dating back to the Middle Ages. The town hall is a vivid example of the Gothic style: its frontal facade has preserved a small balcony, which was used as a kind of tribune for the performances of city rulers. 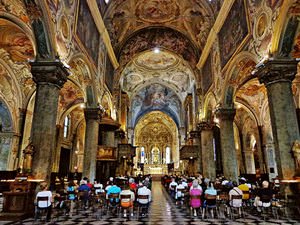 An equally impressive architectural object is the Villa Reale located in a beautiful spacious park. City visitors can stroll through the park and appreciate the look of the old palace at any time. Take care of booking a tour of the villa in advance. Within the walls of the villa there are many unique design elements, including old frescoes and unique medieval furniture.
Your active city break in Monza. Attractions, recreation and entertainment - best places to spend your day and night here
Monza is a perfect place for nature admirers. In the city and its surroundings, there are a lot of picturesque parks. In the city park, you can admire decorative plants and the collection of …

Open
A tour of the Royal Villa built by order of Empress Maria Theresa of Austria promises to be no less exciting. Outwardly, the palace looks quite strict and restrained, while its interior decoration is striking in its splendor. It has also preserved unique murals on the walls and ceiling. Here you can admire the antique stuccoes as well as appreciate the elegance of huge chandeliers designed and produced by the best European masters. 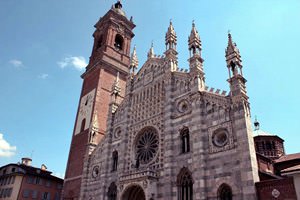 The best place for walking outdoors is the city park, a kind of historical attraction. The founder of this picturesque park is the Italian King Eugène de Beauharnais who entrusted the design of the park area to the famous architect Luigi Canonica. At the beginning of the 20th century, a racetrack, and later an autodrome, was built in the park. Today visitors of the park have many beautiful places for enjoying pleasant walks and secluded recreation. In the warm season, they can visit a golf club opened in 1928.
Advices to travellers: what you should know while being in Monza
1. The closest international airports are located in the surroundings of Milan. Every day, they accommodate flights from different countries of the world. From the airport, you can travel to …

Open
An important local historical site is the Expiatory Chapel built in honor of King Humbert I who died at the hands of rebels. This monument was built in the very place where the king was murdered. The height of the stele is 35 meters, it is complemented by a symbolic sculptural composition.

This guide to iconic landmarks and sights of Monza is protected by the copyright law. You can re-publish this content with mandatory attribution: direct and active hyperlink to www.orangesmile.com.
Monza - guide chapters 1 2 3 4 5 6 7 8

City tours, excursions and tickets in Monza and surroundings

Survived castles around Monza
♥   Castle 'Monza Castle' Monza, 1.7 km from the center. On the map

♥   Castle 'Vimercate Tower' Vimercate, 8.6 km from the center. On the map

National and city parks around Monza
♥   World Heritage Site 'Monte San Giorgio' , 44.2 km from the center. On the map

♥   National Park 'Parco nazionale dell’Appennino Tosco-Emiliano' , 156.1 km from the center. On the map

Art galleries in Monza and around
♥   Art museum 'Padiglione d Arte Contemporanea' Milan, 13.4 km from the center. On the map

♥   Art museum 'Museo Poldi Pezzoli' Milan, 14 km from the center. On the map

Sights around Monza from our guide 'Extreme places on Earth'

Distance from Monza center - 21 km.
Nowadays the old village attracts people who like architecture. There was saving a family palace of Crespi in neogothic style. Other beautiful buildings are the Crespi d'Adda church, workers’ houses. Nothing has changed for about a hundred years. If you want to become engrossed in the past, walk in this old village. Now it is quite hard to imagine that earlier this area was one of the most technically equipped in Europe. There was a modern lighting system and even a good-working aqueduct. … Read further

Distance from Monza center - 15.5 km.
Several symbolic monuments are installed next to the basilica. A series of antique columns is the most unusual element of the surrounding area. They are preserved fragments of ancient Roman buildings. These columns were part of the baths in the 3rd century AD. The Basilica of St Lawrence has lost almost half of its values and original design elements for more than a thousand years of existence. A beautiful fresco has been preserved on the wall behind the main altar. Visitors can also see an ancient sculpture of Padre Pio. Its age is more than a thousand years. The painting under the dome was made already in the Middle Ages. But it continues to be considered a true work of art. … Read further 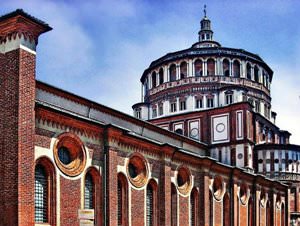 Distance from Monza center - 15 km.
Over the past decades, the main church in Milan has remained a popular tourist attraction. The queue of those wishing to see the legendary frescoes doesn’t vanish, so it’s recommended to sign up for a tour several days in advance. Anyone who wishes to see the legendary fresco by Leonardo da Vinci, will have to undergo a special procedure. An outerwear has to be cleaned from the dirt using a dedicated gadget. Only after that, you can take a look at the amazing work of art. However, visitors can not admire it for more than 15 minutes. … Read further

Search touristic sites on the map of Monza

Sightseeing in regions nearby Monza

Milan
St. Ambrogio Basilica. Ambrogio, a former Bishop of Milan, (IV century) is considered the patron saint of the city. The temple, which is named after him, is the oldest church in the city and, according to many, the most beautiful in its simplicity. The basilica is primarily famous thanks to the sarcophagus of the Roman general Stilicho, the golden altar of the IX century ... Open »
Como
Once you finish the observation of the mentioned sights, it’s time to make a walk on the port district of the city as on its territory is located one more famous historical monument – Duomo Cathedral. The building will be interesting to tourists because it has been remade a number of times during its history. The modern look of the cathedral features traits of gothic and ... Open »
Bergamo
This square is also the location of another famous object – the Basilica di S.Maria Maggiore. The church is one of the oldest historical buildings. Also don’t forget to visit opened and fascinating Roman portal and Cappella Colleoni – they are all can be found on the same square. Finally, when you’re done with these sights, it’s time to visit the palaces that once ... Open »
Varese
Not far away from the church is located a small picturesque village that still keeps several houses built during medieval times. While walking on narrow streets you can see many shops and outlets on your way where you can buy memorable souvenirs created by local masters. There are several attractive villas on the territory of the city. Each villa has its own cultural ... Open »
Pavia
At the beginning of the 70s of the 8th century, Charlemagne captured the town. It took the legendary king many days to get Pavia – the Italian settlement was struggling and capitulated only after a long siege due to hunger. Soon after that, Charlemagne was crowned in Pavia as the King of Lombards. At the edge of the 12th and 13th centuries, Pavia was a self-governing town. ... Open »
Lombardy
The region's capital is Milan, the city of fashion and art. The best fashion shops and boutiques attended by celebrities can be found on Via della Spiga and Via Montenapoleone. In addition to luxury shops, there are many cultural venues, many of which are known far beyond the country. La Scala Theatre, The Sforzesco Castle, the Cathedral, Church of Santa Maria delle Grazie and ... Open »

All about Monza, Italy - sightseeings, attractions, touristic spots, architecture, history, culture and cuisine. Prepare your trip together with OrangeSmile.com - find out the 'must see' things in Monza, which places to visit, which excursions to take, where the breathtaking views are waiting for you. Planning your trip with this travel guide will help your to get the most out of Monza in few days.