Sightseeing in Lecce - what to see. Complete travel guide 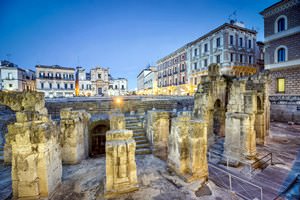 In the region of Apulia, which Italy is famous for, tourists can visit a wonderful city called Lecce. Why does this city attract tourists so much? The settlement is incredibly picturesque and never ceases to amaze its visitors with unparalleled beauty. Local people often call their homeland the Athens of Apulia as there is a Greek community in the city. Some people call Lecce “Southern Florence” because of a great number of architectural landmarks in Baroque style. Perhaps, the “Golden City” is the most interesting nickname of Lecce. This name appeared because of the golden limestone mining in the region. Many local buildings are made from this material. On a sunny day, the city shines as if it is made of gold.
The Messapians were the first inhabitants of the region. They founded a settlement called Sybar on the site of modern Lecce. The region attracted many different tribes but the Romans paid their attention to the area and conquered it in the 3rd century. When the Roman Empire added Lecce to its territory, the city started developing and growing in size. Many beautiful buildings appeared in the city at that time. However, the Visigoths invaded the region after the fall of the Roman Empire. They plundered the Italian city and made many local people suffer. The invasion of the Visigoths started a period of uncertainty in the history of Lecce.
The city frequently changed its “owners” – the Byzantines ruled here, followed by the Saracens, and after that the Hungarians claimed the territory. Only when Normans reached the poor town in the 11th century, the life of Lecce and its people changed drastically. The city started developing and becoming prosperous again. Thanks to the managing skills of the Norman rulers, Lecce turned into an important economic center. During the reign of the Hohenstaufen and Anjou dynasties, the Italian city turned into a large and flourishing center that had strategic importance for the whole country. Copyright www.orangesmile.com
In the heart of Lecce, in Piazza Sant'Oronzo, tourists can see a fabulous Roman monument – an ancient amphitheater. It is still not clear when the gorgeous amphitheater was built, so scientists still argue on the origins of the complex. Historians only agree on the approximate construction date between the 1st and 2nd centuries AD. The ruins of the ancient amphitheater were discovered when workers started cleaning the site to build an Italian bank. Finally, citizens and guests of Lecce could see the ruins of the amphitheater in its full glory in 1940. That being said, archaeologists managed to unearth not the whole amphitheater. 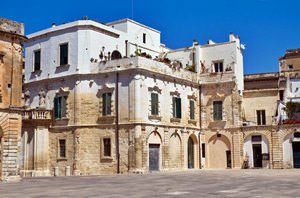 In the past, this giant building could provide space for up to twenty thousand visitors. It is almost one hundred meters long and eighty-three meters wide. The arena itself is fifty-three meters long and thirty-four meters wide. Nowadays, visitors can see only one-third of the architectural monument because buildings and other points of interest stand on the remaining part of the amphitheater. Despite this, it is easy to imagine how grandiose and posh the building judging only by its fragment.
The Theatine Monastery is one more architectural attraction that deserves the attention of guests. The monastery is situated not far from a local sacred shine – the Church of Saint Irene. For centuries, the monastery was providing shelter to the Theatine monks. When the religious community ceased to exist, the building became municipal property. The city of Lecce started taking care of the monastery and maintaining it in good condition. Nowadays, this is a popular location of various trade fairs and exhibitions. 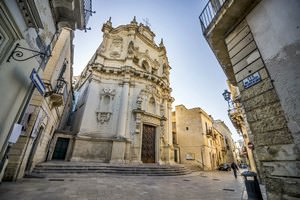 The construction and look of the monastery keep amazing its numerous guests. Perfectly positioned semicircular arches decorate the perimeter of the building’s first floor. The second floor looks spectacular with its beautiful windows and triangular attics. The curtain rail with a rigged design completes the architectural ensemble. The majority of Lecce’s guests try to visit the Theatine Monastery and explore the marvelous building inside and outside.
The city’s main square, Piazza Sant'Oronzo, has one more notable attraction – the Sedile Palace. According to historic records, the palace was completed in the 16th century. Nowadays, the eye-catching building is an important architectural landmark with decent traits of Gothic and Renaissance styles. The building is very tall. Giant columns and arches with intricate ornaments decorate the main entrance to the palace. The Sedile Palace was Lecce’s city hall until the 50s of the 19th century. Nowadays, this is a popular venue for all kinds of exhibitions and events. 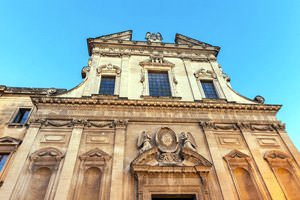 Lecce is situated seventy kilometers from Brindisi. The latter has an international airport that serves flights from many European and Asian countries. However, tourists might need to make a change on their way to Brindisi. Numerous trains connect Brindisi to Lecce. The transit time to the golden Italian city is only one hour. Tourists can always choose to travel by bus but the journey time is the same. It is also possible to reach Lecce from Ancona – daily trains connect these two cities.
This guide to iconic landmarks and sights of Lecce is protected by the copyright law. You can re-publish this content with mandatory attribution: direct and active hyperlink to www.orangesmile.com.

City tours, excursions and tickets in Lecce and surroundings

Shopping streets in Lecce
♥   Shopping area ' Piazza Mazzini' Lecce, 0.4 km from the center. On the map

Survived castles around Lecce
♥   Castle 'Charles V Castle' Crotone, 0.2 km from the center. On the map

♥   Castle 'Melendugno Castle' Melendugno, 16.4 km from the center. On the map

♥   Castle 'Castiglion del Torto' Castiglioncello Bandini, 31.2 km from the center. On the map

Search touristic sites on the map of Lecce

Sightseeing in regions nearby Lecce

Otranto
Initially, Otranto had another name – Hydrus – and was a part of ancient Greece. When the Roman army conquered the settlement, they changed its name to Hydruntum. At that time, this settlement was an important seaport located on the route to the Balkans. In the 11th century, almost all residents of the town were speaking Greek. In 1068, Robert Guiscard captured the ... Open »
Brindisi
Despite picturesque coast and tender sun visitors are traditionally attracted by large choice of wines and inimitable Italian cuisine. Brindisi is the largest center of wine-making, so you will find rich selection of wine in any restaurant. Local restaurants also serve unique dishes with seafood and here you can try authentic Italian paella. The best time for beach rest in ... Open »
Ostuni
The Messapians, who settled here in the 7th century BC, were the first residents in the area. They also built the first roads on top of the hill. The archaeological excavations proved that Ostuni was a developed settlement already in the antiquity period. The Romans captured the town in the 3rd century BC. We have almost no information about that period in the history of ... Open »
Alberobello
South Italy is a fantastic place where tourists can relax on the coast of the Adriatic Sea. This is also the location of the charming town of Alberobello. This is a small settlement that, nevertheless, is not deprived of attractions. The city’s name appeared from a combination of two words: “arbor”, which means “tree” in Latin, and “bellum” or “war”. Many ... Open »
Monopoli
In the Italian town of Monopoli, tourists can easily combine sightseeing with relaxation and admiration of the gorgeous sea views. The town is famous for its architectural landmarks, many of which are several thousand years old. Tourists enjoy visiting this part of Italy because towns like Monopoli are great for not only educational and cultural tourism but also for pleasant ... Open »
Apulia
Beaches of the province are also worthy of the highest praise. The beautiful coast, clean water and great equipment make it possible not only to swim in the gentle sea, but also to enjoy water sports. The region is famous for typical houses of local residents - Trulli - which can be seen in every provincial town. Most of these buildings survived in Alberobello, so there are ... Open »

All about Lecce, Italy - sightseeings, attractions, touristic spots, architecture, history, culture and cuisine. Prepare your trip together with OrangeSmile.com - find out the 'must see' things in Lecce, which places to visit, which excursions to take, where the breathtaking views are waiting for you. Planning your trip with this travel guide will help your to get the most out of Lecce in few days.