Sightseeing in Ostuni - what to see. Complete travel guide 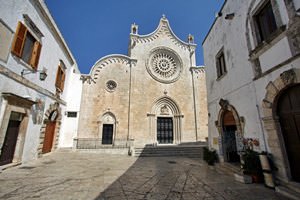 In South Italy, tourists enjoy visiting the coast of the Adriatic Sea. This is the location of a miraculously beautiful city called Ostuni. Quite often, you can hear tourists use another name for this settlement – Italy’s White City. This name is not random. Almost all buildings in Ostuni are painted in white and look like they merge to create one giant construction. That being said, this is not the only peculiarity that makes Ostuni so interesting to visit. The city has managed to keep its medieval architecture. Together with beautiful beaches and nearby olive groves, local sights add a special charm and make a vacation in this Italian city truly unforgettable.
The Messapians, who settled here in the 7th century BC, were the first residents in the area. They also built the first roads on top of the hill. The archaeological excavations proved that Ostuni was a developed settlement already in the antiquity period. The Romans captured the town in the 3rd century BC. We have almost no information about that period in the history of Ostuni. Only ruins of ancient Roman villas remind of those long-gone times. When the Roman Empire ceased to exist, the Visigoths claimed this territory, but soon the Lombards replaced them. The latter failed to remain in Ostuni for a long time, and the Saracens became the new rulers. During the Byzantine period, the first diocese was established in Ostuni.
At the edge of the 11th and 12th centuries, the Normans captured the city. This is how Ostuni turned into one of the major military ports of the country. Generally speaking, the Norman period in the history of the Italian city was marked by rapid development and growth. Thanks to Frederick II, the city had no feudal servitude. To strengthen the border and protect the territory, it was decided to build a castle with an active guard round the clock. The Spanish period was a true time of prosperity for residents of Ostuni. People were getting richer, the culture was developing, and new buildings were added to the infrastructure. Ostuni changed its color to white in the 17th century. All buildings were covered with lime carbonate to disinfect them during a plague epidemic. Copyright www.orangesmile.com
During your vacation in Ostuni, don’t forget to visit a local restaurant and try one of the region’s traditional dishes. It is not a secret that Italy is famous for its diverse pasta varieties. In Ostuni, just like in the rest of the region, people enjoy eating Orecchiette or simply small ears. As a rule, Orecchiette has a size of roughly one inch. As this pasta is handmade, the size can differ slightly. Local restaurants usually serve this dish with turnip greens. Panzerotti is one more pride of local chefs. This is a savory turnover pie that is a bit reminiscent of a folded pizza but Panzerotti has softer dough. 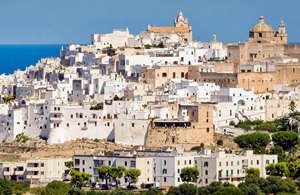 Having arrived in Ostuni, many tourists immediately notice a beautiful cathedral on the top of a hill. This basilica was built in the 15th century. Initially, this was a Gothic building. There was another building on the hill before the church – a castle that was protecting Ostuni. The façade of the church deserves a closer look. The façade has several portals and a beautiful rose window in the middle. If you look closer at the façade, you will notice Jesus Christ and apostles around him. Jesus is holding Earth in his hands, showing his protection.
The inner décor of the cathedral was restored and upgraded in the 18th century. At that time, the central inner nave of the church got interesting frescos depicting Saints Horace and Biagio. During a visit to the shrine, don’t forget to take a look at the ceiling and admire its colorful frescoes. If you pay closer attention to them, you will notice different scenes from the life of Jesus Christ. All foreign tourists in Ostuni consider this religious landmark a must-visit destination. It is also interesting to visit the main church in the city during public worship. 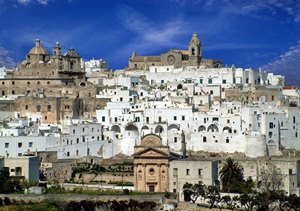 Would you like to visit a bishop’s palace? In Ostuni, the palace is situated on Cathedral Square. It is not hard to find the building – there is Acro Scoppa Bridge close to the palace. Norman rulers built this castle in 1148. Unfortunately, the building turned into ruins four centuries later. Only the foundation remained, and so it was decided to build a new palace on that foundation. The earthquake, which happened in the city in 1743, caused much damage to the building but the city’s authorities quickly restored the important landmark. A seminary building is adjacent to the palace – an arched loggia connects them.
Brindisi airport is situated thirty-five kilometers from Ostuni. This airport receives flights from numerous European countries and large Italian cities. If you decide to travel by train, you can reach the Adriatic coast by making a change in Bari or Brindisi. When heading from the capital of Italy, the total journey time is roughly five hours. Fixed route buses connect the railway station and the city center. Besides public transport, tourists can always call a taxi.
This guide to iconic landmarks and sights of Ostuni is protected by the copyright law. You can re-publish this content with mandatory attribution: direct and active hyperlink to www.orangesmile.com.

♥   Castle 'Episcopio Castle' Grottaglie, 25 km from the center. On the map

National and city parks around Ostuni
♥   National Park 'Parco nazionale dell’Alta Murgia' , 105.9 km from the center. On the map

Sights around Ostuni from our guide 'Extreme places on Earth' 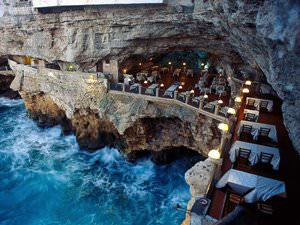 Distance from Ostuni center - 42.2 km.
The lime cave, one of the most famous restaurants on the planet, is 25 meters above sea level, so you can admire the impressive coastal panorama. The restaurant's menu will appeal to the gourmets who like seafood. Here you can taste the delicious Thai-style squid, as well as the grilled shrimp with garlic. The prices in the restaurant Grotta Palazzese are quite high. The average price for a court is more than 100 US dollars. … Read further

Search touristic sites on the map of Ostuni

Sightseeing in regions nearby Ostuni

Alberobello
It may seem that all trulli look alike but there are still some differences between them. Some buildings have interesting signs left by masters. The trulli with these signs are considered “male” buildings. If there is no such sign on the building, it is considered a “female” one. The cupolas are built in a different way so that there are various signs, such as Zodiac ... Open »
Brindisi
The resort is just starting to gain popularity among overseas tourists. Currently the majority of visitors are the travellers from France. The main advantage of rest in Brindisi is calm and solitary atmosphere, remoteness from big cities and the absence of noisiness that is so inherent in many large resorts. If you find this rest quite boring, you can try something new and ... Open »
Monopoli
The Castle of Charles V is one more attraction that Monopoli is famous for. The gorgeous fortification was built at the beginning of the 16th century. The Aragonese were the rulers in the region at that time. They ordered to demolish an old Benedictine monastery and build a fortress on its site. The main purpose of the stronghold was to protect the settlement from the sea ... Open »
Apulia
Every town in the region regularly hosts interesting holidays and festivals, so its guests always have a chance to be in the heart of colorful celebrations. Typically, events are accompanied by fairs, folk festivals, musical and theatrical performances running directly on city squares. Fans of outdoor activities have to choose resorts located on the coast; those who want to ... Open »
Lecce
In the past, this giant building could provide space for up to twenty thousand visitors. It is almost one hundred meters long and eighty-three meters wide. The arena itself is fifty-three meters long and thirty-four meters wide. Nowadays, visitors can see only one-third of the architectural monument because buildings and other points of interest stand on the remaining part of ... Open »
Bari
... Open »

All about Ostuni, Italy - sightseeings, attractions, touristic spots, architecture, history, culture and cuisine. Prepare your trip together with OrangeSmile.com - find out the 'must see' things in Ostuni, which places to visit, which excursions to take, where the breathtaking views are waiting for you. Planning your trip with this travel guide will help your to get the most out of Ostuni in few days.