Sightseeing in Savona - what to see. Complete travel guide 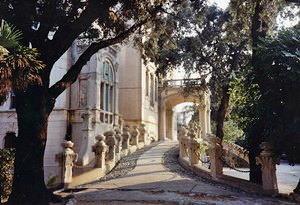 Savona is the capital of the same named province, a major seaport and industrial center. The resort is distinguished by peaceful and silent atmosphere. This is an ideal place for those who want to relax on an abandoned beach and run away from the city noise.
Port district is very popular among visitors of Savona. Here you can enjoy looking at white yachts moored off the coast, make a boat ride or enjoy delicacies in one of restaurants of the city. One of the main attractions of the city, a high tower, is also located here. The tower got its name in the memory of the famous explorer Pancaldi. If you climb the tower up, you will find yourself on a large observation platform, which features stunning looks of the coast and the city.
Not far from the port is located the main religious attraction of Savona - San Giovanni Battista Church, which was built in the 16th century. This complex is considered an integral part of Santa Maria Assunta Cathedral. Together they have witnessed numerous important events and have kept a lot of memorable stories and events, which are imprinted on the frescoes. Copyright www.orangesmile.com
Art-lovers will be interested in visiting Art Gallery, which exhibits priceless canvases of medieval masters and contemporary authors. Just like any modern city, Savona has numerous entertainment and shopping complexes. Shops here feature a wide selection of clothing by top brands. Female tourists will not be able to stay indifferent to elegant collections of jewelry and perfumes. Combine shopping with relaxation in cozy bars and cafes, and night is the time for night clubs, discos and casinos that wait for visitors. 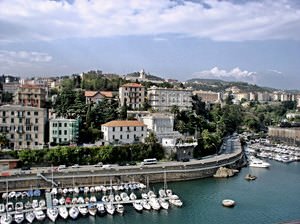 The Sistine Chapel is a real masterpiece of medieval architecture. Its construction was completed in 1483. Not long ago, they fully complete the reconstruction, and began using the chapel for various cultural events. The chapel has an incredibly beautiful interior; mastering was made by Paolo Brusco, the well-known artist. It has beautiful frescoes, painted ceiling and decoration elements made of precious metals.
At the top of the cliff, is a unique historical complex - the fortress of Priamar. Its formation began in the first half of the 16th century. The fortress was built by order of the Genoese, who want to strengthen their power in the occupied territories. Already in the 16th century, the castle's territory expanded considerably. A prison, a powder cellar, and several ceremonial halls were built there. Nowadays, part of the large-scale historical building is occupied by an exposition of the archaeological museum, and some of the halls are used for conferences and other massive events. 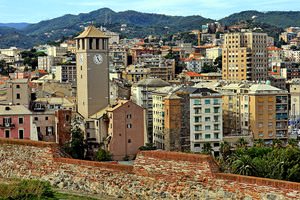 Art admirers will definitely appreciate the City Pinakothek. Its location is a luxury palace of the 19th century with a white facade. The museum presents a collection of unique works of art. Its main value is the paintings of famous artists of the Renaissance. You can admire old sculptures and collections of ceramics. They have 22 halls for the expositions.
One of the most beautiful architectural monuments of Savona is Palazzo Delle Piane. This beautiful palace is a real sample of Liberty architectural style. A well-known architect, Alessandro Martiningo, worked on the palace project. It was possible to build a magnificent palace in just one year. Today, its exquisite facade with carved balconies and sculptures is one of the most photographed objects in the city. 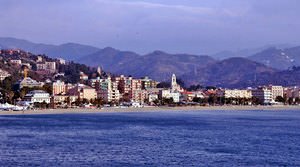 Christopher Columbus' House is the most unusual sight of Savona. It is located in a picturesque area, on top of a hill. The old mansion, where a famous navigator once lived, houses a museum dedicated to his studies. After the museum visitation, take a stroll around the olive garden that surrounds the mansion. There are extensive vineyards nearby.
This guide to iconic landmarks and sights of Savona is protected by the copyright law. You can re-publish this content with mandatory attribution: direct and active hyperlink to www.orangesmile.com.

City tours, excursions and tickets in Savona and surroundings

Survived castles around Savona
♥   Castle 'Priamar' Savona, 2.7 km from the center. On the map

♥   Castle 'Il Castellaro' Albisola Superiore, 6.5 km from the center. On the map

National and city parks around Savona
♥   National Park 'Parco nazionale delle Cinque Terre' , 98.2 km from the center. On the map

Sights around Savona from our guide 'Extreme places on Earth' 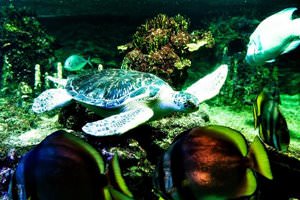 Distance from Savona center - 36.7 km.
Visitors will have an opportunity to admire the most incredible deep sea inhabitants, which are now living in a huge aquarium, and watch the stingrays that lurk in a large outdoor tank. In total, there are 70 aquarium tanks. More than one hour is necessary to get acquainted with all sea creatures. There is also an exclusive ride, which is called Night Shark. Once a month, everyone can spend a night in the aquarium and watch the behavior of its inhabitants after dark. … Read further

Search touristic sites on the map of Savona

Sightseeing in regions nearby Savona

Liguria
The beach area is conditionally divided on two zones: Eastern is called Riviera di Ponente and the Western is Riviera di Levante. The most popular beach resort is San Remo bearing a proud title of the capital of floriculture. The resort is an annual venue for the Festival of the Italian song. In the 19th century, there were built great concert halls, luxury hotels and casinos, ... Open »
Genoa
Start your observing of Genoa from the city’s port that is especially beautiful on sunsets. The old port hides a real treasure – San Giorgio Palazzo that was built in XIII century according to all canons of the Renaissance architecture. While walking on a historical center of the city you can see medieval buildings surrounded by walls and houses of XIV century. In Palazzo ... Open »
Portofino
Why is this statue dedicated to him? In 1947, Italian diver Dario Gonzatti died not far from the bay in Portofino. He was the first diver who made an underwater adventure. The height of Christ of the Abyss is two and a half meters. The statue stands seventeen meters deep into the sea. However, this distance doesn’t prevent tourists from seeing this landmark of Portofino ... Open »
Asti
Asti Cathedral or the Cathedral of Santa Maria Assunta is one more attraction that tourists should definitely visit. The large and gorgeously looking church in Gothic style dates back to the 14th century. In order to make the plans of architects come true, builders had to destroy three buildings. They used the remaining bricks to build this true architectural masterpiece. The ... Open »
San Remo
San Remo is full of old buildings, castles and palaces, the main of which is Alfred Nobel's villa where he spent the last days of his life. Tourists are also recommended to visit the casino named "San Remo" and the theater inside it and the d'Olmo Borea palace, which now provides space for the exhibition of Archaeological Museum with its large collection of artifacts from the ... Open »
Menton
Since there are many plantations of roses in the city, Menton has become a center of perfumes and essential oils manufacturing. Each February an unusual celebration takes place in the city. This is a parade devoted to lemon, which is harvested on this time of the year. Besides visiting beautiful parks and gardens, guests can get acquainted with many attractions of the city. ... Open »

All about Savona, Italy - sightseeings, attractions, touristic spots, architecture, history, culture and cuisine. Prepare your trip together with OrangeSmile.com - find out the 'must see' things in Savona, which places to visit, which excursions to take, where the breathtaking views are waiting for you. Planning your trip with this travel guide will help your to get the most out of Savona in few days.