Sightseeing in Cefalu - what to see. Complete travel guide 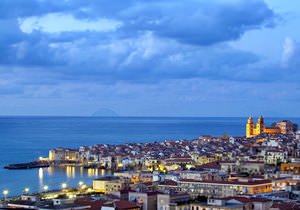 In the fabulous island of Sicily, tourists can visit an interesting resort – the city of Cefalu. This is a truly enchanting region that has retained its antique look. Many tourists enjoy visiting this resort every year thanks to sandy beaches and clean water. Majestic rocks near in the vicinity of the city complete an idyllic view of the fishing village. Cefalu is most popular with the youth and families with children. That being said, every vacationer can easily find a suitable activity to fit one’s taste here.
The nearby rock has a shape reminiscent of a head, and this fact admittedly gave the city its name. Ancient Greeks called it Kephale or “head”, and that name slowly changed to Cefalu. However, some scientists think that the city got its name after Phoenician world Cephas meaning “rock”. Archaeologists proved that there was a settlement called Kefaloídion on the rock in the 4th century BC. Besides that, archaeological excavations showed that people already lived in this region three hundred years before the ancient Greeks. In 254 BC, Romans invaded Cefalu. They gave another name to the city – Cephaloedium.
After the fall of the Roman Empire, this territory became a part of the Byzantine Empire. This was the period when the city started expanding its territory. It was moved closer to the sea and became the residence of the Bishop of Greece at some point. Arabs conquered the coastal territory in 858. After that, the city was added to the Emirate of Palermo. Cefalu changed its name to Gafludi during that period. Arabs were not the last rulers in this region because Normans and their king Roger II captured the city in the 11th century. This is when the settlement got its current name. Italians set up their authority in Cefalu only in 1861. Copyright www.orangesmile.com
Nowadays, this is a fishing village that is famous for its beautiful and clean beaches with soft sand. The majority of recreational areas are located twelve kilometers from Cefalu. There is also a city beach that is very long – its length is one and a half kilometers. This is the most popular area to swim and sunbathe among both tourists and residents of the city. 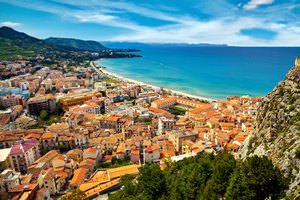 The beach is located close to the waterfront. The latter got its name after Giuseppe Giardina. The beach is free to enter. Everyone is welcome to come here to swim and sunbathe. However, some sections of the beach are paid. They have such beach gear as lounge chairs and umbrellas, as well as better infrastructure such as beach bars. This beach has one drawback – it is almost always crowded. That being said, this is an ideal choice for tourists with children because the sea is shallow near this part of the coast.
What else can tourists see in Cefalu? Without a doubt, it is worth visiting the symbol of the city, the famous head-shaped rock that rises above residential buildings almost for 300 meters. The rock has a name – La Rocca. If you decide to get to the top of the rock, you should remember that this is not an easy task. However, if you manage to get to the top, you will get a wonderful reward – a mesmerizing view of the city from high above. 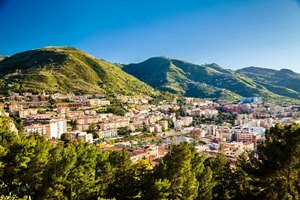 The view is so enchanting that it is easy to spend hours admiring this fabulous panorama. Moreover, there are still ruins of an old temple at the top of La Rocca. According to historic data, this was a temple of Diana. However, scientists think that the tribes, which lived in this area at that time, worshipped not the goddess but freshwater.
There is a cathedral at the foot of La Rocca. The magnificent church was erected by the order of Roger II, King of Sicily. Construction works started in 1131 and lasted almost one hundred forty years. Cefalu Cathedral is a beautiful example of the Norman architectural style. It is a miracle that the cathedral has survived until our days in almost ideal condition without any renovations. Thanks to towers in Norman style, the cathedral is reminiscent of a castle typical for the knighthood period. Inside the church, take a look at a Latin cross of an unusual shape and multiple antique columns. 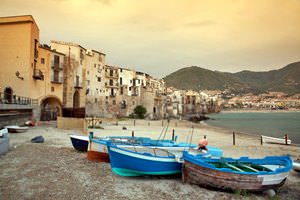 To get to Cefalu, tourists need to fly to Palermo first. This is a large international airport that has direct buses to Cefalu. The journey time is one hour. It is also possible to get to the city by train. The ride will be approximately as long as by bus. If you prefer to travel from Naples, a train ride will last roughly nine hours. Upon arrival at the bus or train station, it is easy to get a taxi to the city center. Some hotels offer transfer services for their guests.
This guide to iconic landmarks and sights of Cefalu is protected by the copyright law. You can re-publish this content with mandatory attribution: direct and active hyperlink to www.orangesmile.com.

Survived castles around Cefalu
♥   Castle 'Castelbuono' Palermo, 10.4 km from the center. On the map

Sights around Cefalu from our guide 'Extreme places on Earth'

Distance from Cefalu center - 58 km.
The building began to be used for various public events from 1582. It was converted into an infirmary during another plague epidemic in the late 17th century. The building was used as a warehouse for some time. The church building began to gradually collapse in the middle of the 18th century. A shelter for the poor was opened here in 1855. The building remained in this status until 1985. It was declared a historical monument of national significance about 30 years ago. It is used for theatrical and musical performances today. … Read further

Search touristic sites on the map of Cefalu

Sightseeing in regions nearby Cefalu

Sicily
The Greek people have left Sicily with magnificent temples and theaters, the Romans brought the amazing mosaics, the Arab added Moorish style to the island that can be seen in a variety of architectural sights. The arrival of the Normans to the island of Sicily was marked by the acquaintance with Roman architecture, the monuments of which still impress tourists with their ... Open »
Palermo
Once you leave the dark tunnels, is it time to go to the markets of Palermo, which always amaze visitors by their beauty and a rich choice of products. They are more like luxury fairs rather than the traditional Italian markets. La Vucciria Market offers best seafood, and Mercato di Capo has a department with clothing and accessories besides grocery. Nature lovers should make ... Open »
Agrigento
The traditions of this part of Sicily formed through centuries, and local cuisine is an essential part of the national culture. Dishes with fish caught in local coastal waters are the first thing that comes to mind when describing the cuisine of Agrigento. The development of fishing in the region changed the most popular food recipes. Local people love pasta with sardines. ... Open »
Vulcano
On the island, there is a wonderful balneological resort. The springs with healing muds located here are really miraculous. Besides mud baths, travelers have an opportunity to relax at the unusual beach called Acque Calde. The water here is very warm. The matter is that there are several hot springs at the coast. In some areas of the beach, the water literally bubbles and ... Open »
Salina Island
The ancient Sanctuary of the Madonna del Terzito is one of the historic sights. Its construction was completed in 1622; the church was built on the foundations of the ruined Roman temple. Its walls keep many interesting religious artifacts, including a statue of the patron saint of the island. History lovers will enjoy a stroll around the neighborhood of Santa Marina, where ... Open »
Lipari Island
The volcanic island of Lipari located in the Tyrrhenian Sea is the largest of the Aeolian Islands. Its close location to Sicily has made it a popular tourist destination; many travelers visit it during extensive excursion programs. The island is incredibly interesting from a historical perspective, as the first settlements on its territory were founded in the Neolithic Age. A ... Open »

All about Cefalu, Italy - sightseeings, attractions, touristic spots, architecture, history, culture and cuisine. Prepare your trip together with OrangeSmile.com - find out the 'must see' things in Cefalu, which places to visit, which excursions to take, where the breathtaking views are waiting for you. Planning your trip with this travel guide will help your to get the most out of Cefalu in few days.