Sightseeing in Padua - what to see. Complete travel guide 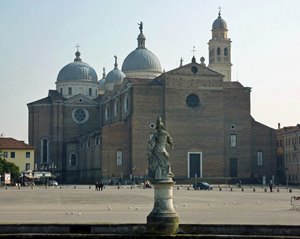 According to one version, the founder of this town was a mighty warrior Antinori, whose tomb is not yet found by archaeologists. This is a major cultural center and home to many great artists.

The central part of the city consists of three squares – Piazza della Frutta, Piazza delle Erbe and Piazza dei Signiori. The symbol of the city - the magnificent Palace of Reason – is also located here. The palace was built in the 15th century. One of the halls of the palace is decorated with beautiful frescoes created by the famous medieval masters Stefano da Ferrara and Nicolo Miretto. A large gallery is opened in the palace. This place is known for wonderful views of the town. You will find shops of merchants who offer wide selection of goods on each of the squares of Padova. As it comes from the names of the squares, Piazza della Frutta is the location of a large fruit market, while the others sell mainly souvenirs and handcrafts.
Extraordinary weekend in Padua - unusual places, services and attractions for travel gourmet
…

Open
Not far away from the squares is located one more place of interest - one of the oldest schools in Europe - Padova University. It was founded in 1222; Galileo himself taught in the walls of this university, as well as many other famous physicists and mathematicians. If eight centuries ago the number of students of the university was approximately 500 students, today their number exceeds 63 thousands.
Cappella degli Scrovegni is one of the main cultural sights of this town. The chapel is decorated with frescoes by Giotto. Since the building is very old and requires careful approach, the excursion to the chapel lasts 15 minutes only. The number of visitors that can enter the premises at the same time is also severely restricted. Such measures are necessary in order to maintain the climate within the building. Any change of it may destroy the works of art. Copyright www.orangesmile.com
Cuisine of Padua for gourmet with top restaurants and cafe
Padua restaurants will be of great interest for Italian cuisine admirers and genuine pizza gourmands. A small budgetary restaurant named Orsucci serves a popular Italian treat in more than …

Open
The city has many beautiful palaces, and the Palazzo della Ragione is among the most spectacular ones. Its construction began in the 12th century and lasted almost a hundred years. Over the centuries, the main feature of the palace had always been its beautiful ceiling frescoes, created by Giotto di Bondone. But in the 18th century, the roof collapsed, and these wonderful works of art have been lost forever. 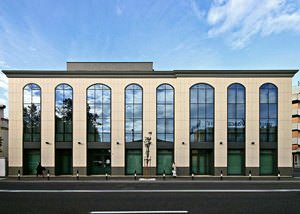 Now the main artifact of the ancient palace is the Stone of Infamy, on which bankrupts were punished in the Middle Ages.

Another interesting cultural site is the Zuckermann Palace where the Museum of Applied & Decorative Arts is currently housed. It presents a rich collection of ancient works of art, as well as unique products made of stone and metal. In the museum, you can also find an extensive collection of ancient weapons, medieval clothes, ceramics and antique furniture. The very building is of great architectural value.
Excursion over cultural sights of Padua - 'must visit' points of interest
By the amount of significant tourist objects the city of Padua trails only the majestic sea-born city of Venice. Padua is a large and impressive city which offers its guests various …

Open
An interesting religious monument is the Basilica of Santa Giustina. According to the legends, it is located in the very place where the holy Christian martyr Justina of Padua was buried more than 1,500 years ago. The first church on the site of the present one was built back in the 6th century. Today, visitors to the city can see the basilica that was erected in the 16th century. 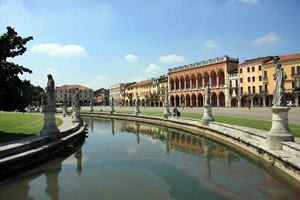 The cross-shaped building is striking in its scale, the length of the church is 122 meters, and the width is 82 meters. The basilica is also interesting for its old art decorations and religious artifacts.
Your active city break in Padua. Attractions, recreation and entertainment - best places to spend your day and night here
Padua hosts one of the natural sights of global significance which is a majestic botanical garden. A promenade through the Orto Botanico di Padova will be of great interest to all the guests …

Open
The Pontifical Basilica of Saint Anthony is a religious monument of a much earlier period. Its location is also not accidental - the basilica was built in the 13th century over the burial site of St. Anthony of Padua. Now the saint's tomb is inside the temple, and pilgrims from all over the world come to bow to it. 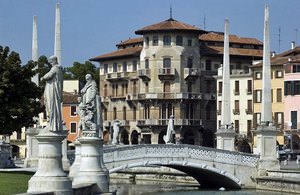 Travelers who are interested in the history and culture of the ancient world would be happy to visit the Civic Museum Eremitani. A significant part of the museum's exposition is works of famous artists - here you can see beautiful paintings by Bellini, Giotto, and Tintoretto. The museum has a vast archaeological department, which displays valuables found in the city and its immediate vicinity.

This guide to iconic landmarks and sights of Padua is protected by the copyright law. You can re-publish this content with mandatory attribution: direct and active hyperlink to www.orangesmile.com.
Padua - guide chapters 1 2 3 4 5 6

City tours, excursions and tickets in Padua and surroundings

Shopping streets in Padua
♥   Shopping area ' Via Santa Lucia' Padova, 0.1 km from the center. On the map

♥   Shopping area ' Piazza Garibaldi' Padova, 0.3 km from the center. On the map

♥   Castle 'Castello del Catajo' Battaglia Terme, 14.1 km from the center. On the map

♥   Castle 'Castello di Montegalda' Montegalda, 16.1 km from the center. On the map

National and city parks around Padua
♥   National Park 'Parco nazionale delle Dolomiti Bellunesi' , 85.7 km from the center. On the map

Sights around Padua from our guide 'Extreme places on Earth' 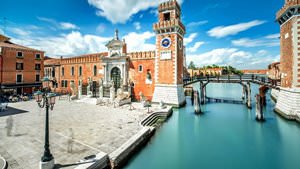 Distance from Padua center - 36.9 km.
It was at this shipyard that the legendary ship "Galleass" was built. It is a three-masted galley of incredible size. It was used to transport heavy guns and other weapons later. The Venetian arsenal was badly damaged during the war with Napoleon. Some of its buildings were destroyed. They were never able to recover. Interesting medieval exhibits are kept in the preserved buildings today. They are connected with the shipbuilding and military past of the Republic of Venice. Some historic buildings are used for various festivals and themed events. The Venice Biennale takes place here. … Read further

Distance from Padua center - 36.3 km.
The central embankment was founded in 19th century. It was built on dumpy sediments from the Big Channel. The most outstanding place of interest is where the embankment crosses Rio del Vin Channel. There you can see Ettore Ferrari 's bronze sculptures. People who like to walk a lot can continue their route and go further. The central embankment moves smoothly into the adorable Riva Ca di Dio Embankment. … Read further

Distance from Padua center - 36.3 km.
Casanova immediately began to make a hole in the floor of his cell. He planned to escape from the empty palace one of the holidays. Casanova was suddenly transferred to another cell when almost everything was ready to escape. Prison guards discovered a huge hole in his former cell soon after. Casanova had to bribe the guards to keep this fact from becoming public. He escaped from his new cell through a hole made in the lead roof shortly after. … Read further

Search touristic sites on the map of Padua

Sightseeing in regions nearby Padua

Mestre
Mestre is a charming small town in northern Italy. Venice is located very close to Mestre. Both cities are connected with a big railroad bridge named the Liberty Bridge. The town’s downtown is closed for traffic, so you can walk through it on foot without any hassle. Not far away from the center of Mestre you can find numerous cozy cafes, many of which have spacious open ... Open »
Venice
San Marco Square (Piazza San Marco) forms the center of Venice. This is also the lowest point in the city, and because of this the square is constantly flooded with water, especially in winter. San Marco Square is surrounded by beautiful buildings - the Basilica of San Marco , the Palazzo Ducale di Venezia , the Campanile belfry and the Marciana Library. To the right of the ... Open »
Treviso
This place was a small fishing village in the past. Nowadays this is a popular tourist destination. The city is often referred to as "Venice in miniature" because its picturesque streets with colorful fishing lodges really remind of Venice. The historic center of the city is surrounded by fortifications and medieval walls. Here cross two rivers - Kania and Silas. This is truly ... Open »
Veneto
Perhaps the most famous city of Veneto is its capital, Venice. Its name has always been associated with graceful canals and bridges, quiet narrow streets and awesome old palaces. It is a city of romance and harmony, captivating with its refined atmosphere. Equally attractive is the town of Belluno; there is a famous hill resort of Cortina d'Ampezzo next to it. Those seeking ... Open »
Ferrara
First mentions of this settlement date back to 753 AD. The town’s name appeared in a document of the Lombard king Desiderius. According to this manuscript, Ferrara had been a part of the Exarchate of Ravenna until Desiderius captured it. However, the Lombards didn’t remain the rulers in this region for a long time. Francs defeated them. After that, Francs presented ... Open »
Verona
Verona is a cozy provincial town that is also known as the home of Shakespeare’s Romeo and Juliet. In terms of the number of sights and architectural heritage Verona is a worthy competitor to Milan and Rome. Ancient Roman Amphitheater is known as the most famous sight of Verona. It was built yet in the 1st century AD. Moreover, the amphitheater is working and this is the ... Open »

All about Padua, Italy - sightseeings, attractions, touristic spots, architecture, history, culture and cuisine. Prepare your trip together with OrangeSmile.com - find out the 'must see' things in Padua, which places to visit, which excursions to take, where the breathtaking views are waiting for you. Planning your trip with this travel guide will help your to get the most out of Padua in few days.