Sightseeing in Udine - what to see. Complete travel guide 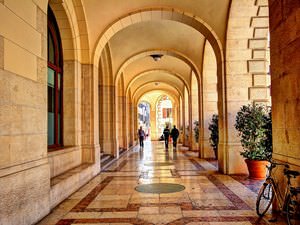 The city is located not far away from Venice. This is a magnificent resort, which has gained popularity among tourists long ago. The territory of the modern city has got its first inhabitants yet in the prehistoric times. This fact is proven by numerous archaeological finds. However, first mentions of the city are found only in the 1st century AD. At that time Emperor Otto II started a construction of a beautiful castle here. Nowadays the ruins of this castle are considered one of major sites.
During its long history Udine has experienced many tragic events. The rulers of the city were changed repeatedly. This place was ruled by the Turks and then by noble Italian families. Only in the second half of the 19th century the city officially became the part of the Italian kingdom. Such rich history couldn’t have failed to leave a trace on the architecture and culture of Udine. Nowadays you can see numerous monuments and buildings that remind of important historical events.
Piazza della Liberta Square is the favorite place for walking. It is surrounded by picturesque buildings from the beginning of the 19th century. The biggest art gallery in the city named Arcado di San Giovanni is located near the square. The gallery exhibits priceless items made in 16th - 18th centuries. Among the medieval buildings we should definitely mention Galleria di Storia ed Arte Antica Castle, which is in a really great condition. The halls of the castle provide space for exhibitions of two museums. Museum of Ancient Art exhibits a rich collection of archaeological finds, among which are a collection of figurines and jewelry. Museum of History is full of interesting facts and details related to the development of the city and its rulers. Among the oldest religious buildings we should definitely mention the local Cathedral, which is a unique combination of Gothic and Romanism styles. The famous artist Tiepolo has worked over the design of the halls. The frescoes of this church amaze visitors for centuries. Copyright www.orangesmile.com
A beautiful 13th-century Cathedral has survived in the city. During the recent refurbishment, fragments of an earlier church were found in it. Probably, it was named after St. Jerome. Over the years of its existence, the cathedral had been destroyed by earthquakes more than once and had been reconstructed repeatedly. It received its original outlook during the last reconstruction. Masters managed to restore the facade as it used to be in the 14th century. The interior design is also special. 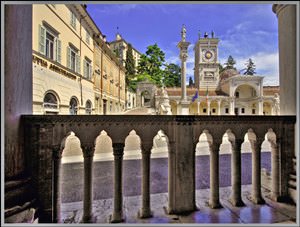 No less interesting architectural monument is the Archbishop's Palace erected in the 16th century. The palace has been used directly only the first century of its existence. As early as the 17th century, the Diocesan Museum was opened there, and an art gallery occupied part of the building. Nowadays, entertaining tours are spent in the palace, during which you can admire pictures by famous Bavarian and Austrian painters. A significant part of the building is occupied by the library, which holds about 11000 rare old books.
Antonini Palace is a spectacular Baroque monument. Its construction was completed in 1735. The palace was built for the noble Antonini family. Future owners invested heavily in the construction. The palace is decorated with priceless works of art. The decoration was carried out of rare tree species and marble. Many unique design elements have survived. You can admire them during a tour. 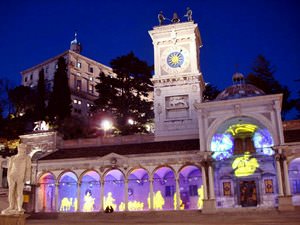 The Church of St. Francis is one more excellent monument in the Romanesque style. It was built at the end of the 13th century. The ancient church is relatively small. During the Second World War, it was almost completely destroyed. However, it became possible to restore it in the shortest possible time. Some unique design details were brought back to life, as well. Now, visitors can admire beautiful old frescoes. Interesting art exhibitions are often held in the church.
Admirers of contemporary art will be interested in visiting the Galleria d’Arte Moderna. It keeps about 4000 works of art, including sculptures, paintings, and other masterpieces by famous masters of the 19th - 20th century.
This guide to iconic landmarks and sights of Udine is protected by the copyright law. You can re-publish this content with mandatory attribution: direct and active hyperlink to www.orangesmile.com.

City tours, excursions and tickets in Udine and surroundings

Survived castles around Udine
♥   Castle 'Castello di Udine' Udine, 0.5 km from the center. On the map

Search touristic sites on the map of Udine

Sightseeing in regions nearby Udine

Kranjska Gora
During the Middle Ages, the Habsburg dynasty became the ruler in the region. Only when the Austro-Hungarian Empire stopped existing, the Slovenian state joined the Kingdom of Serbian, Croatian, and Slovenian peoples that eventually became a new country, Yugoslavia. When Yugoslavia ceased to exist, Kranjska Gora became a part of Slovenia. Starting from the middle of the 20th ... Open »
Portoroz
In 1994 healing mineral springs were discovered in Portoroz suburbs, around which rapidly grew a network of fitness centers and beauty facilities. Now guests can relax with benefit for their health. To the service of guests are available a large selection of therapeutic baths, massage and spa rooms, as well as physiotherapy and aromatherapy. Any hotel certainly has a fitness ... Open »
Koper
Tourists wishing to swim and sunbathe in Koper can do this at the city beach. This is a pebble beach with a comfortable stone stair that goes to the water. Tourists with children need to be careful because the water is deep even near the shore. The municipal staff maintains the beach clean and makes sure that the quality of service remains high all year long. Tourists can ... Open »
Piran
The architecture of Piran stated getting some vivid Italian traits in the 13th century after the town had joined the Republic of Venice. Piran remained a Venetian delegate for almost five centuries. In 1797, the region of Istria was added to the territory of the Austrian Empire. World War I greatly changed the map of Europe, and Piran was ceded to Italy. World War II didn’t ... Open »
Bled
What is Bled famous for the most? Upon arriving at the shore of the beautiful lake, tourists from all parts of the world try to visit the island with the same name that is situated in the middle of the large lake. There is an old chapel on the island. This chapel is primarily famous for the old bell – local legends say that this bell can make wishes come true. The only ... Open »
Treviso
If you want to see main sights of this place, move your feet to the central square named Dei Signori. Palazzo dei Trecento is the oldest building, the construction of which took place in the 13th century. The building is created according to the best traditions of the Romanesque style. Duomo Cathedral is located just opposite to it. An amazingly beautiful chapel adorned with ... Open »

All about Udine, Italy - sightseeings, attractions, touristic spots, architecture, history, culture and cuisine. Prepare your trip together with OrangeSmile.com - find out the 'must see' things in Udine, which places to visit, which excursions to take, where the breathtaking views are waiting for you. Planning your trip with this travel guide will help your to get the most out of Udine in few days.