Sightseeing in Sicily - what to see. Complete travel guide 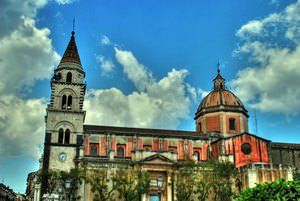 The island of Sicily is practically the only place in Italy that has managed to preserve and save the imprints of many ages and epochs. Many years ago Sicily attracted a large number of invaders. On the territory of the city lived the Romans, Greeks, Byzantines, Normans, and Arabs. Sometimes only one nation lived here, and sometimes different nations co-existed in this place. All these peoples have left rich heritage in the history and culture of this place. Various cultures have influenced on the formation of all aspects of the island’s life, from art and architecture to the language and cuisine.
Best beaches and recreation areas around Sicily
Many travelers associate beach vacations in Sicily with the picturesque coastline of Palermo. Palermo's most popular beach is Mondello covered with amazing white sand making water to look …

Open
The Greek people have left Sicily with magnificent temples and theaters, the Romans brought the amazing mosaics, the Arab added Moorish style to the island that can be seen in a variety of architectural sights. The arrival of the Normans to the island of Sicily was marked by the acquaintance with Roman architecture, the monuments of which still impress tourists with their grandeur. You should definitely visit the cathedrals in Monreale and Cefalu. The Spanish nation has introduced the island with the ornate decoration of the buildings facades, various moldings and decorative ornaments that are typical for the baroque style and that can be seen on many Sicilian palaces and churches.
The main places that are famous among tourists are museums and villas of Palermo, Taormina town well-known for its ancient Greek theater, Archaeological Park and Ortigia, Norman cathedral in Cefalu and Piazza del Duomo, Syracuse Historic Center, a magnificent cathedral in Monreale, Agrigento and Piazza Armerina, and the Aeolian Islands. Copyright www.orangesmile.com
Top hotels in Sicily for business trip or short vacation
Sicily has more than 3,000 accommodation places and each of them is unique. Many local hotels are real historical attractions, the lovely hotel Villa Athena is among them. This luxurious …

Open
Sicily is famous for its unusual natural attractions. Dionysus Ear cave is an extremely popular tourist destination. The ancient limestone cave owes its name to an unusual entrance, whose outlines does resemble a little auricle. The cave is remarkable not only for the variety of unique geological formations but for its acoustic properties. 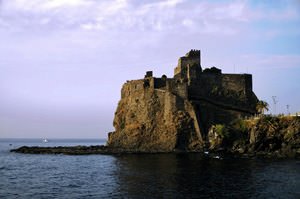 Hikers around ancient places will have an opportunity to see the ancient Greek theater, built in the 3rd century BC. Originally, it was designed for 10000 spectators. The theater has been perfectly preserved to the present day and is currently used for various cultural events. The ancient arena is used for concerts, theatrical performances and film festivals.
Cuisine of Sicily for gourmet with top restaurants and cafe
The main feature of Sicilian cuisine is its versatility. Culinary connoisseurs can easily recognize typical Greek, Spanish and Arabic features; their harmonious combination determines the …

Open
Milazzo resort is known for a unique religious monument - the temple of San Francesco di Paola. Today, Milazzo is a quiet and small resort. But several hundred years ago, it was a large port city. It used to fend off the attacks of invaders. During one of these attacks, a cannon shell hit the church wall. However, the shell was far from destroying the building. It remained intact in the wall instead. This amazing feature attracts many travelers. 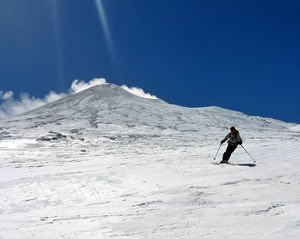 Villa del Casale, which is a unique monument of the Roman era, is located in the very heart of the island. It is considered a true world masterpiece. This luxurious villa was built in the 4th century. Judging by its size, it belonged to the emperor himself or to some of his trusted officials. Villa's main preserved element is a mosaic floor made of clay. The most different stories from Greek myths are clearly seen on it.
Authentic traditions, festivals and lifestyle of Sicily inhabitants
Cultural traditions of Sicily represent a unique phenomenon, which has found expression in the most interesting folk festivals and customs. During the year, the island celebrates a variety …

Open
Mount Etna continues to remain Sicily's trademark. It is the largest active volcano in Europe. Interesting tours are organized to the volcano. You can admire it from a safe distance. The large adjoining territory is constantly covered with ash and is absolutely lifeless. Here, you can make wonderful memorable pictures against lunar landscapes. Etna erupts frequently. Even if the eruption does not take place for a long time, clouds of white smoke are constantly seen above the crater.

This guide to iconic landmarks and sights of Sicily is protected by the copyright law. You can re-publish this content with mandatory attribution: direct and active hyperlink to www.orangesmile.com.
Sicily - guide chapters 1 2 3 4 5 6 7 8

Survived castles around Sicily
♥   Castle 'Castello di Caccamo' Caccamo, 24.4 km from the center. On the map

♥   Castle 'Castelbuono' Palermo, 33 km from the center. On the map

♥   Castle 'Castello di Agrigento' Agrigento, 48.8 km from the center. On the map

Sights around Sicily from our guide 'Extreme places on Earth'

Distance from Sicily center - 56 km.
The building began to be used for various public events from 1582. It was converted into an infirmary during another plague epidemic in the late 17th century. The building was used as a warehouse for some time. The church building began to gradually collapse in the middle of the 18th century. A shelter for the poor was opened here in 1855. The building remained in this status until 1985. It was declared a historical monument of national significance about 30 years ago. It is used for theatrical and musical performances today. … Read further

Search touristic sites on the map of Sicily

Sightseeing in regions nearby Sicily

Cefalu
The nearby rock has a shape reminiscent of a head, and this fact admittedly gave the city its name. Ancient Greeks called it Kephale or “head”, and that name slowly changed to Cefalu. However, some scientists think that the city got its name after Phoenician world Cephas meaning “rock”. Archaeologists proved that there was a settlement called Kefaloídion on the rock ... Open »
Agrigento
The traditions of this part of Sicily formed through centuries, and local cuisine is an essential part of the national culture. Dishes with fish caught in local coastal waters are the first thing that comes to mind when describing the cuisine of Agrigento. The development of fishing in the region changed the most popular food recipes. Local people love pasta with sardines. ... Open »
Palermo
In the city you can see numerous old churches and cathedrals, the most famous of which are Santa Maria dell'Ammiraglio, the Church of San Cataldo, La Mortarana and Il Duomo Cathedral that is famous far beyond the country's borders. An interesting fact – the majority of the religious buildings in Palermo have been created on the site of Islamic mosques. Capuchin Catacombs are ... Open »
Trapani
Bread making traditions have also been developing and polishing for centuries in Trapani. There are several ancient bakeries in the city. Travelers, who enjoy trying national delicacies in popular restaurants, should not forget to order the most popular dish in Trapani – pasta with seafood. According to locals, limoncello is their national drink. It’s a local liqueur made ... Open »
Catania
The largest religious sight of the city is Catania Cathedral, the building of which finished a thousand years ago. Besides rich cultural program Catania offers its guests wide choice of entertainments. Tourists will find here a large choice of clubs and restaurants. Nightlife is so usual and ordinary here that many public houses work round-the-clock. Theatrical art ... Open »
Ustica Island
The island's capital, the town of Ustica, is located to the east. Walking through this small town is a wonderful way to get acquainted with cultural traditions of islanders. You can see a lot of unique architectural details or important religious sites, as well as interesting handicraft shops and colorful markets in the town. Ustica features a huge amount of fantastically ... Open »

All about Sicily, Italy - sightseeings, attractions, touristic spots, architecture, history, culture and cuisine. Prepare your trip together with OrangeSmile.com - find out the 'must see' things in Sicily, which places to visit, which excursions to take, where the breathtaking views are waiting for you. Planning your trip with this travel guide will help your to get the most out of Sicily in few days.