Sightseeing in Pizzo - what to see. Complete travel guide 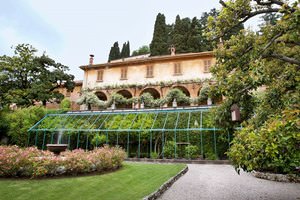 The province of Vibo Valentia in Italy has many hidden gems that are incredibly exciting to explore. This is the location of Pizzo, a small town that has a scenic location on the cliff overlooking the Gulf of Saint Euphemia. Orange and olive groves surround this tranquil area. Pizzo is also famous for its large vineyards. Absolutely all open town areas offer an unforgettable view of the sea. The picturesque surrounding nature only emphasizes the harmonious atmosphere of Pizzo. The town center is a true labyrinth of narrow winding streets, so prepare for a true adventure. The streets can go up or rapidly go down to the sea.
The history of Pizzo is rich and it has brought many interesting traditions to the lives of local people. Initially, the Italian town had another name – Napitia. The first settlers were a tribe that had to participate in the Trojan War, after which they had to search for a new home for many years, moving from one area of the Mediterranean to another. When they reached Calabria, the nomadic tribe decided to stop. The Saracens played an important role in the destiny of Napitia. The settlement was suffering from their invasions for many years. In the end, these constant attacks completely ruined Napitia. Its citizens moved to the mountains, and ruins of the former town disappeared with time.
In 1070, Roger, the famous Norman king, ordered to build a hunting castle on the ancient ruins of Napitia. Two centuries later, this castle sheltered Saint Antonius. In 1363, the first monastery and church appeared on the ruins of the old town. These buildings became the heart of a new town called Pizzo. The population of the settlement was growing steadily, turning a small village into an attractive town. To protect the region from the pirates, it was decided to build a durable protective wall. The fortress wall had donjons at the edges, a bridge, and a watchtower near the entrance. Copyright www.orangesmile.com
Castle Murat is the main attraction of Pizzo and the first landmark that tourists usually visit in this town. The castle was built in 1492 during the reign of Ferdinand I of Aragon. The central tower, which is called La Torre Maestra, is much older. It was built in 1380. The initial purpose of the stronghold was to protect the town from the attacks of Saracens. Later, the building was transformed into a prison. The biggest part of the castle has survived until modern days without any alterations but some elements of the building are lost. 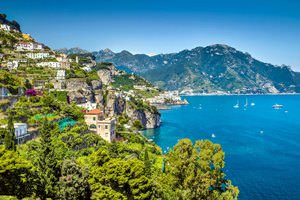 For example, there was a big tunnel below the castle. The length of this tunnel was twelve kilometers. This underground passage led to two old castles, namely, Rocca Angitola and Vibo Valentia. The tunnel was in use until the 18th century and then it was lost. Archaeologists still search for this famous underground passage. Nowadays, there is a museum open in Castle Murat. This venue is dedicated to Joachim Murat, Napoleon’s marshal. Thousands of tourists visit this place to see old documents, walk in the castle’s halls, and take a look at the old collection of coins with one hundred and thirty exhibits.
Would you like to see one of the most unusual churches? There is a unique shrine not far from Pizzo that was carved directly in the rock. This church was built during the Middle Ages. Besides the unusual location, the sacred place amazes its guests with numerous halls and several symbols of the religion. According to a local legend, sailors hid in this cave after the shipwreck. They forgot the image of Madonna in the cave. Local people wanted to take the icon to another place, but the icon mysteriously returned to the cave after another storm. After that, local fishermen made an altar in the grotto and decorated it with a bell from a sunken ship. 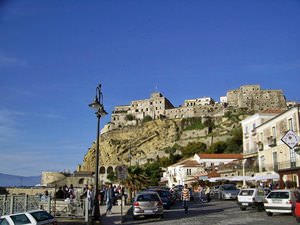 At the beginning of the 20th century, Italian master Angelo Barone started expanding the sacred cave and making it deeper. When he died, his son Alfonso Barone continued his father’s work. It took him forty years to finish the job. The church was finally ready in the 60s of the 20th century. Starting from that time and to our day, the church has been active and has been welcoming locals and guests of the town every day. People come to see the unusual shrine and to attend the public service. The church is free to enter for citizens of Pizzo but tourists need to buy a ticket. Children and elderly people can also visit the church any time free of charge.
Lamezia Terme International Airport is the closest airport to Pizza. The distance to this Calabrian town is only sixty-five kilometers. This airport receives multiple flights from many European countries. Upon arrival at Lamezia Terme, tourists can reach Pizzo by bus. There are direct buses at the airport. It is also possible to reach Pizzo by train from Rome. The journey time is seven hours in this case, and passengers need to make a change in Lamezia Terme Centrale Station.
This guide to iconic landmarks and sights of Pizzo is protected by the copyright law. You can re-publish this content with mandatory attribution: direct and active hyperlink to www.orangesmile.com.

City tours, excursions and tickets in Pizzo and surroundings

Survived castles around Pizzo
♥   Castle 'Castello di Squillace' Squillace, 27.8 km from the center. On the map

♥   Castle 'Castello Normanno-Svevo' Cosenza, 59.2 km from the center. On the map

♥   Castle 'Altafiumara Fort' Villa San Giovanni, 73 km from the center. On the map

National and city parks around Pizzo
♥   National Park 'Parco nazionale dell’Aspromonte' , 72.7 km from the center. On the map

Search touristic sites on the map of Pizzo

Sightseeing in regions nearby Pizzo

Messina
Today Messina is a major port city, which has had a great strategic importance during all its history. Both military and trade routes are located here. Today you can see many beautiful yachts in the port of the city. Here are organized boat trips and excursions to the most beautiful places of the island. We should also mention that the city is quite small, but, despite this ... Open »
Calabria
It’s worth to say a few words about the unique nature of these places that has attracted poets and painters for many centuries. You can see rich forests and groves a few steps away from the coast; even large cities have picturesque parks, bright flower beds and alleys. Fans of ecotourism can go for a walk in the mountains; those fond of water activities can relax at any ... Open »
Lipari Island
It won’t be difficult to get from the citadel to the main religious monument of Lipari, the Cathedral of St. Bartholomew. Its main value is the silver statue of a saint dating back to 1728 year. It’s believed that the first religious facility on this site appeared in the prehistoric era. You can visit the archaeological site situated next to the cathedral. The most ... Open »
Vulcano
On the island, there is a wonderful balneological resort. The springs with healing muds located here are really miraculous. Besides mud baths, travelers have an opportunity to relax at the unusual beach called Acque Calde. The water here is very warm. The matter is that there are several hot springs at the coast. In some areas of the beach, the water literally bubbles and ... Open »
Salina Island
Salina is an island of volcanic origin; there are two volcanoes, Monte Fossa delle Felci and Monte Porri, in the center of it. The height of the first is 965 meters, and the second is 860 meters. Travelers climb to the hills covered with dense vegetation and find it amazing. The tops of volcanoes provide good views not only of the neighborhood of Salina, but also surrounding ... Open »
Taormina
The Romans captured the city 200 years after its foundation. Later, the city had been under the control of rebellious slaves for quite a long time and then resisted the Arab conquerors for more than 50 years. The Arabs have managed to capture the impregnable city at the beginning of the 10th century, but a hundred years later their reign was broken - the coastal city has ... Open »

All about Pizzo, Italy - sightseeings, attractions, touristic spots, architecture, history, culture and cuisine. Prepare your trip together with OrangeSmile.com - find out the 'must see' things in Pizzo, which places to visit, which excursions to take, where the breathtaking views are waiting for you. Planning your trip with this travel guide will help your to get the most out of Pizzo in few days.