Video of flights over top monuments of Florence in HD format.
Use 'Full Screen' mode.
Our suggestion on the way to observe the most important architectural landmarks of Florence is very simple – fly, read, watch. Thanks to our original 3D technology of flying over cities, you will be able to “visit” (see the video) and watch the most important architectural landmarks of the city - Florence Cathedral, Basilica of Santa Croce, Palazzo Pitti, Certosa di Firenze, Villa di Castello and many others. We have carefully selected the supplementary information for each of them, including interesting historical facts and a collection of photographs. Additionally, we have placed all main sights on the map of Florence below, since this information can be useful when you plan your walking routes in Florence. 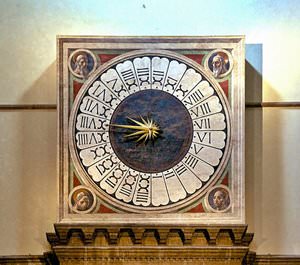 Facts:
» Santa Maria del Fiore means ‘the flower of St. Mary.’ The Cathedral is the most important in Florence and one of the largest churches in Italy.
» The Florence Cathedral is included in the UNESCO World Heritage List.
» At least six architects were employed in the development of the project and construction.
» A number of famous painters and sculptors, including Michelangelo, worked hard to decorate the Florence Cathedral.
» One of the most interesting features of the temple is the tower decorated with 16 statues of the patriarchs and prophets, as well as bas-reliefs depicting the creation of man and woman, the planet, human labor and inventions.
» The top-level tower offers the most stunning panoramic views of Florence. 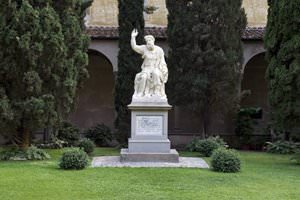 Facts:
» The Basilica of Santa Croce is located in the heart of Florence; that’s one of the most popular attractions of the city.
» About 300 famous figures of culture, science and politics are buried in the church. Among them Galileo, Dante, Machiavelli, Michelangelo and many others have to be mentioned. The tomb has a form of the marble box with the figure of the deceased on top of the sarcophagus.
» The Basilica of Santa Croce is famous for its frescoes by Giotto.
» Initially, all the walls of the church were decorated with frescoes, but during the plague in the 16th century, when the church was used as a hospital, the walls were whitewashed. Once, during restoration, the frescoes were found, and the works of the great Giotto were among them.
» The Basilica is famous for its 16 chapels.
» In 1452 Leonardo da Vinci was baptized in this church. 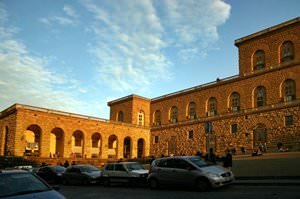 Facts:
» The Palazzo Pitti is the largest Florentine palace. Today, the Palazzo Pitti is one of the biggest and most interesting museums in Florence.
» The Silver Museum and the Carriage Museum, the Palatine Gallery and Gallery of Modern Art can be visited within the walls of the Palazzo Pitti.
» The Silver Museum has a magnificent collection of vases. There are Roman amphorae, vases of the Sassanid Empire, samples from Byzantium and Venice of the 14th century.
» The Gallery of Modern Art has a unique collection of works by Italian painters of the 19th century.
» The Palatine Gallery is decorated in Barocco style; that’s an incomparable backdrop of artistic works. Here are the paintings of Raphael, Titian, as well as works of Tintoretto and Giorgione, Venetian masterpieces by Rubens and Van Dyck, Caravaggio and Murillo and many others. 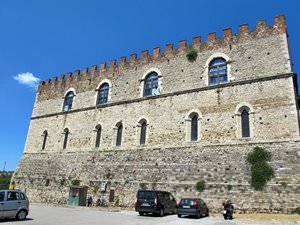 Facts:
» The Certosa di Firenze is the ancient Florentine monastery, located in Galluzzo suburbs, about 5 km south-west of the center of Florence.
» Construction of the monastery began in 1341. Subsequently, the Certosa di Firenze has been expanded and enriched by many gifts of noble Florentine families.
» The collection of pictures that are stored in a separate room, called Pinakothek, is of particular interest.
» One of the most remarkable works are five poorly preserved frescoes in the lunettes of the Pontormo (1523 - 1525), Madonna and Child with Saints by Perugino and Saint Peter of Verona and Martyr Saint George by Ridolfo Ghirlandaio.
» In 1958, monks made a vast monastic complex open for the public.
» Visiting the monastery is free, but you can only walk around it accompanied by a monk who conducts a tour in Italian. 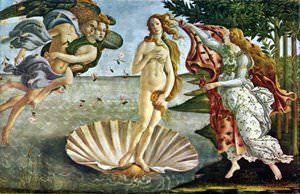 Facts:
» Villa di Castello is one of the oldest suburban residences of the Medici.
» Works of several Florentine artists and craftsmen are kept in Villa di Castello, including Renaissance masterpieces of Sandro Botticelli, Birth of Venus and Spring.
» It’s important to note that in 2011 the villa was enlisted in the top ten parks in Italy.
» Its gardens, fountains, grottoes and garden mazes are famous throughout Europe.
» Entrance to the park is free, but going on a trip it’s worth to remember that every second and third Monday of the month the residence is closed to the public access.

Basilica of the Holy Spirit, Florence

Facts: » The Basilica of the Holy Spirit is the Catholic church in Florence built in the 15th century.
» The Basilica of the Holy Spirit is one of the most famous buildings by the Florentine genius architect, Filippo Brunelleschi.
» The church has collected a large number of magnificent paintings and frescoes.
» Among the most important treasures of the church there are such works of art as Madonna and Child with Saints by Filippino Lippi and The Crucifixion by Michelangelo.

Build your walking routes in Florence on the landmark map

Architectural landmarks in the regions around Florence

Venice
St Mark Basilica is the cathedral of the Roman Catholic Archdiocese of Venice. That’s most famous of the churches of the city and one of the best known examples of Byzantine architecture in Western Europe. Since the 9th century, the basilica was known as the Golden Church and was the symbol of Venetian wealth. It owed its second name to luxurious furnishings and golden mosaics. The cathedral has a free-standing bell tower of about 100 meters ... Open »
Rome
The Colosseum was the largest amphitheater in the entire ancient world. It could receive as many as 50,000 people. Originally, it consisted of four floors; the first three had wide arched entrances, while the fourth had rectangular doorways. From historical sources it’s known that grand gladiatorial games were held at the opening of the Colosseum. About 5,000 wild animals were released in one day. Roman Coliseum is depicted on 5-eurocent ... Open »
Milan
The Milan Cathedral is one of the main attractions of Milan located in the historic center of the city. The Cathedral is built of white marble in the Flamboyant Gothic style. The Milan Cathedral is the fifth largest church in the world. The temple can accommodate up to 40,000 people. There are about 3,400 statues in the cathedral. The main attraction inside the cathedral is the golden statue of patron saint of Milan. The roof of the Milan ... Open »
Torino
The Mole Antonelliana has been the highest building in Turin and even in France until 2011. It was designed by architect Alessandro Antonelli. Originally, it served as a synagogue for the Jewish community in 1863. It was planned that the building would be 66 m high. Antonelli was obsessed with high buildings. As a result, the tower is 167.5 m high. The 90-year-old architect did not manage to complete the project and see his creation. ... Open »
Nice
Sainte-Reparate Cathedral was built in 1699 in honor of the patroness of Nice. According to the legend, young Reparata from Palestine professed Christian faith and died in agony for this when she was 12 years old. Angels brought a boat with the young saint to Nice, to the shore of the Angel Bay that was named after this event. The cathedral is located in an old part of the city. It is a typical construction built in baroque style. The ... Open »
OrangeSmile.com - online travel reservation expert providing reliable car rental and hotel booking services. We feature more than 25.000 destinations with 12.000 rental offices and 200.000 hotels worldwide.
Secure Server