Sightseeing in Procida Island - what to see. Complete travel guide 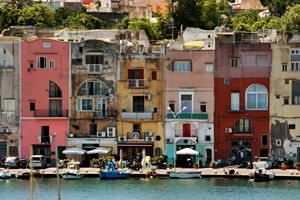 Procida is the tiny island of volcanic origin, the smallest in the Bay of Naples. The island is home to about 10,000 people. Procida features amazing atmosphere of national color, as locals cherish their traditions and customs passing them on from generation to generation. For many hundreds of years, fishing has been the main livelihood of indigenous population. The eastern part of the island is inhabited by hereditary farmers; there travelers can see fantastically beautiful orchards and extensive vineyards.
Excursion over cultural sights of Procida Island - 'must visit' points of interest
The abbey of St. Michael the Archangel is certainly one of the main attractions of Procida. This is the oldest building on the island, built in the 7th century by four Benedictine monks. …

Open
Despite its undeniable appeal, Procida is unjustly deprived of tourists’ attention. It doesn’t feature well-developed tourist infrastructure, there are no large-scale hotel complexes and noisy entertainment venues. However, those associating vacations with scenic walks and exploring historic sites are sure to enjoy this small island.
The island has rich historical heritage. The Abbey of St Michael the Archangel founded in the 14th century is its main symbol. It is of great value from an architectural point of view; attention should be paid to rich interior of the abbey. The priceless paintings of Luca Giordano painted in the 17th century are its hallmarks. One of the most interesting paintings is mounted in the ceiling, it illustrates the battle between Lucifer and the archangel. Copyright www.orangesmile.com
Your active city break in Procida Island. Attractions, recreation and entertainment - best places to spend your day and night here
Holidays on Procida suggests not only an inspection of a variety of cultural attractions but also long walks around the island. Here you can enjoy a magnificent and almost untouched nature …

Open
One of the most popular places for walking is the port area of Procida, the island's capital. You can not only enjoy vessels staying in the port, but also see the beautiful Church of Madonna della Pieta. This small church has been built in the 17th century and has survived to this day in its original form; it holds a statue of the Madonna, the patron saint of sailors. The church of Santa Maria delle Grazie, which is next to the Plaza of the Martyrs, is the striking monument of Baroque. Many travelers come to these places to enjoy the spectacular scenery, as there is a large panoramic terrace next to the church. 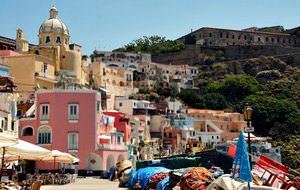 The old fortress of Terra Murata is another attractive place for admiring the scenery. The fortress was built in the 16th century. It’s located on the highest point of the island, so it’s clearly visible from virtually any district. This place is the best for a memorable photo shoot. Climbing the fort also gives a lot of experience, although the height of the mountain is only 91 meters.
Top hotels in Procida Island for business trip or short vacation
Choice of hotels on Procida is well worthy, despite its modest size. Each local hotel has its own unique features. One of the most prestigious hotels on the island is Albergo La Vigna …

Open
Fans of natural attractions won’t be bored too; they should definitely go to the eastern part of the island, which is almost completely occupied by extensive gardens and vineyards. If the beauty of the island won’t seem enough, you can always head to the nearby island of Vivara connected with Procida with a hinged bridge. The whole territory of the island is a unique nature reserve, so that’s the best place to discover diversity of the local flora and fauna. Due to the modest size of the territory, it’s very convenient to explore the island on foot. During the walk you can see amazing residential buildings painted in different colors of the rainbow; they are also considered a clear manifestation of national traditions. Boat trips that will diversify the excursion are popular among tourists. 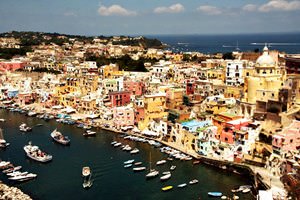 Procida is often informally called “the island of fishermen”. This national business has always been important on the island, and so there are many legends and traditions connected with it. If you walk through the town early in the morning, you will see numerous fishermen who sit at the entrances of their houses and mend fishing nets. Active fishing has shaped the gastronomic traditions of the region. In every national restaurant, visitors can try dozens of dishes with fish and seafood. It is important to mention that all dishes are cooked exclusively from freshly caught fish.
Shopping in Procida Island - main shopping streets, outlets and boutiques
If you are looking for something colorful, you can always buy one of the variants of the carnival mask. Though Procida is not Venice, nevertheless, masks can be found in large numbers here, …

Open
During a walk on local streets, it is easy to notice numerous interesting shops and markets that offer popular national food and goods. Many tourists choose to visit the Abbey of the St Archangel Michael in search of interesting souvenirs. There are several stalls with souvenirs near the gorgeous building. Visitors can buy beautiful clothes with handmade embroidery. As a rule, travelers also enjoy buying limoncello, a popular locally produced liqueur. Residents of the island celebrate the most important national holiday on May 8 – this is the day when they honor their patron saint.

This guide to iconic landmarks and sights of Procida Island is protected by the copyright law. You can re-publish this content with mandatory attribution: direct and active hyperlink to www.orangesmile.com.
Procida Island - guide chapters 1 2 3 4 5 6 7 8

Survived castles around Procida Island
♥   Castle 'Castello Aragonese' Ischia, 6.1 km from the center. On the map

National and city parks around Procida Island
♥   National Park 'Parco nazionale del Vesuvio' , 34.6 km from the center. On the map

Art galleries in Procida Island and around
♥   Art museum 'Archaeological Museum of the Campi Flegrei' Bacoli, 7.2 km from the center. On the map

Sights around Procida Island from our guide 'Extreme places on Earth'

Distance from Procida Island center - 34.8 km.
In 1944, 57 people became disaster victims; during the eruption in 1980 it was managed to avoid human victims. In 1995, the neighborhood of the volcano was declared a nature reserve; now it’s attracting attention of tourists. Guests have an opportunity to walk around the reserve along fabulously beautiful gardens on the slopes of the volcano. There are also unique historical sites in the reserve, the ruins of the ancient Roman city of Pompeii, which was destroyed by one of the large-scale eruptions. … Read further

Distance from Procida Island center - 34.5 km.
One of the most recent devastating eruptions occurred in 1805, when lava flows have destroyed a significant part of Naples. The disaster claimed the lives of 26 000 people. Over the long history, Vesuvius activity have formed the most beautiful mountain landscapes in the immediate vicinity. This outstanding natural attraction was a magnet for visitors back in the 17th century. In the late 19th century, a funicular was built on the slopes of the volcano. The vehicle brought people to the volcano’s vent. However, it was destroyed during the next eruption in 1944. Currently, it’s possible to get to the crater of one of the most dangerous volcanoes in the world only using pedestrian path. … Read further

Search touristic sites on the map of Procida Island

Sightseeing in regions nearby Procida Island

Isola di Ischia
Cattedrale dell’Asswnta is an interesting religious landmark. It also took serious damage during the war with England, but its beautiful chapel with fine wall-paintings has survived until these days almost intact. There's also the museum dedicated to famous film director Luchino Visconti on the island. The venue occupies La Colombaia villa and houses a large collection of ... Open »
Naples
When it comes to entertainments, to the service of the guests of the city are opened numerous restaurants and cafes. If you visit Naples in May, then you should certainly take part in a major culinary competition - the Festival of pizza. Nightlife lovers will certainly find much interesting in Piazza Sannazzaro, San Pasquale di Chiaia and Lungomare Mergellina districts as best ... Open »
Capri
The most popular beach of the island is Marina Piccola. It’s notable because of white sand, playgrounds and diving schools, summer cafes and restaurants; the choice of entertainment options is truly great. There are many hiking and biking areas on the island. Tourists often participate in biking tours and excursions to remarkable historical and cultural places. Gourmets are ... Open »
Sorrento
The central part of the city is the location of Tasso Square, which is decorated with beautiful monuments. One of them is dedicated to the patron of the city, Saint Antonin, and another one is dedicated to famous Italian poet Torquato Tasso. Villa Comunale Park is the best place for walks. This park is also considered the most beautiful one in the city. Here you will find ... Open »
Amalfi
According to the history of Italy in the 9th to 13th centuries, there were four republics in the country at that time, namely, Pisa, Genoa, Venice, and Amalfi. The governments of these republics were taking efforts in establishing strong trading relations with Europe and the East. Amalfi was one of the major cities on these trade routes. It became an independent region by the ... Open »
Atrani
The exact establishment date and origins of Atrani are a mystery. One thing is clear – there were already villas of Roman nobles in this area in the 1st century. The Amalfi Coast was covered with gorgeous ancient buildings. When barbarians started to plunder this land repeatedly, Romans had to leave the area. First mentions of Atrani as a town for aristocrats appeared in ... Open »

All about Procida Island, Italy - sightseeings, attractions, touristic spots, architecture, history, culture and cuisine. Prepare your trip together with OrangeSmile.com - find out the 'must see' things in Procida Island, which places to visit, which excursions to take, where the breathtaking views are waiting for you. Planning your trip with this travel guide will help your to get the most out of Procida Island in few days.