Sightseeing in Otranto - what to see. Complete travel guide 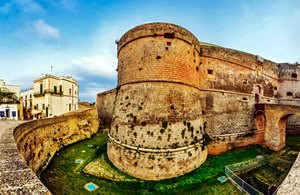 When traveling to the coast of the Adriatic Sea, pay your attention to the old Italian town of Otranto that is famous for its rich history. This small settlement is an ideal destination for a peaceful vacation. Otranto’s gorgeous beaches are perfectly suitable for recreation together with friends and family members. Moreover, Otranto has a rich cultural and historical heritage which is incredibly interesting to familiarize yourself with. A vacation in this Italian town is like a journey to the past. Tourists arriving in the Adriatic coast often mention Otranto as the most interesting, sunny town where the past peacefully coexists with modern life.
Initially, Otranto had another name – Hydrus – and was a part of ancient Greece. When the Roman army conquered the settlement, they changed its name to Hydruntum. At that time, this settlement was an important seaport located on the route to the Balkans. In the 11th century, almost all residents of the town were speaking Greek. In 1068, Robert Guiscard captured the settlement. Soon after that, Otranto became a part of the Kingdom of Sicily. In 1480, the Turkish fleet on its way to invade Rome suffered a shipwreck and had to land at the coast near Otranto. On August 11, Mehmet the Conqueror and his army attacked South Italy.
This was a tragic event in the history of Otranto. Many people were killed, and many were enslaved. People, who refused to convert to Islam, were executed right away. Alfonso of Aragon succeeded in returning Otranto and pushing back the invaders only one year later. Despite the efforts of the town’s authorities, Otranto failed to recover its former importance. Moreover, the attacks of sea pirates became more frequent in the region. This fact also contributed to the decline of Otranto. The growing interest in the town as a tourist destination in the mid-20th century was like a breath of fresh air for the Italian settlement. Copyright www.orangesmile.com
Would you like to see the main fortress in Otranto? The Aragonese Castle is a major historic attraction in the town. It was built in the 15th century during the reign of Ferdinand II. There was initially a military fortification on the site of the castle. That fortification was built during the Roman Empire period by the order of Frederick II but it failed to protect the town from the sea attacks. After the devastating Turkish invasion, it was decided to build a larger fortress that could survive and protect Otranto from enemy attacks. The best architects of Italy were working over the project of the castle. We can still see the result of their work – the Aragonese Castle has survived to the present day. 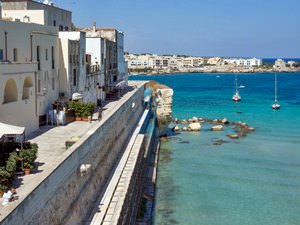 The Aragonese Castle has an irregular pentagon shape with circular towers on the edges. Each of the towers has its name: Torre Alfonsina is the name of the first tower, the second tower is Torre Ippolita, and Torre Duchessa is the third one. A bastion called Punta di Diamante is situated in the fourth corner. The castle was thoroughly restored in 1647. The main tower of the Aragonese Castle – Torre Maestra – was restored at that time. A protective moat surrounds the castle, and it is possible to enter the fortification only using a special bridge. This part of the complex is original and didn’t have any alterations.
Perhaps, the Otranto Cathedral is the most outstanding building in Apulia. This is the main Catholic shrine in the town. The building of the gorgeous cathedral started in 1080 by the order of Pope Gregory VII and lasted eight years. The cathedral that we can see today is a magnificent combination of different architectural styles. It perfectly combines elements that are typical for the early Christian, Byzantine, and Romanesque styles. Inside the cathedral, take a look at the central nave and the fourteen columns that surround it. A semi-circular apse and two chapels at the sides complete the look of the cathedral. 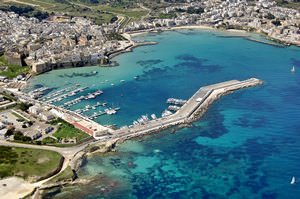 The Otranto Cathedral is fifty-four meters tall and has a width of twenty-five meters. At the end of the 17th century, the shrine got a beautiful wooden ceiling with the gilded surface and rich décor. The eye-catching mosaic floor made from different colorful pieces in 1163 remains the main attraction of the cathedral’s inner décor. The monk, who was making this floor, wanted to show the drama of human life through the endless fight of the good and evil as well as the ability of the virtues to banish sins. Using the side stairs to get to the second floor of the cathedral, visitors can see skillfully made antique frescoes.
The closest airport to Otranto is situated in Bari. This transportation hub receives flights from many European and Asian countries. To get to Otranto from this airport, you can get on a bus that goes to Lecce. This bus makes a stop in Otranto. Another airport that has buses going in the right direction is situated in Brindisi. The distance to Otranto from this Italian city is only seventy kilometers. Tourists can always rent a car at Brindisi airport and travel independently.
This guide to iconic landmarks and sights of Otranto is protected by the copyright law. You can re-publish this content with mandatory attribution: direct and active hyperlink to www.orangesmile.com.

City tours, excursions and tickets in Otranto and surroundings

Survived castles around Otranto
♥   Castle 'Castello Aragonese' Otranto, 0.1 km from the center. On the map

♥   Castle 'Melendugno Castle' Melendugno, 19.6 km from the center. On the map

Search touristic sites on the map of Otranto

Sightseeing in regions nearby Otranto

Lecce
The construction and look of the monastery keep amazing its numerous guests. Perfectly positioned semicircular arches decorate the perimeter of the building’s first floor. The second floor looks spectacular with its beautiful windows and triangular attics. The curtain rail with a rigged design completes the architectural ensemble. The majority of Lecce’s guests try to ... Open »
Brindisi
Brindisi is a small port town in the southern part of the country. This is a great destination for tourists who dream of trouble-free calm rest. Despite the fact this town has started developing as a resort not long ago, here you will find almost ideal conditions for beach rest. Each hotel in Brindisi has a well-equipped beach on its territory. Tourists can attend diving and ... Open »
Ostuni
Having arrived in Ostuni, many tourists immediately notice a beautiful cathedral on the top of a hill. This basilica was built in the 15th century. Initially, this was a Gothic building. There was another building on the hill before the church – a castle that was protecting Ostuni. The façade of the church deserves a closer look. The façade has several portals and a ... Open »
Alberobello
Do you want to see unique trulli buildings? If the answer is yes, head to the western hill. This is where you will find numerous quarters with these interesting houses. Rione Monti is the most popular tourist quarter. When walking among buildings, you will notice many similarities and differences between different buildings. Don’t miss this opportunity to see this fantastic ... Open »
Corfu island
The Emerald Isle of Corfu has long been known for its luxury resorts. It owes its unofficial name to its vast cypress forest, beautiful lemon trees and numerous orange trees. This charming island is famous not only due to its natural attractions, as it has numerous historical monuments that will certainly impress fans of excursions. The old Angelokastro fortress is a permanent ... Open »
Monopoli
Besides sightseeing, Monopoli invites tourists and foreign guests to enjoy the fabulous beaches of the region. Porto Vecchio, which is located not far from the historical center, is one of these amazing recreation areas. This beach is a narrow coastal area covered with soft sand. A thick fortress wall separates the beach from the rest of the town. Porto Vecchio doesn’t have ... Open »

All about Otranto, Italy - sightseeings, attractions, touristic spots, architecture, history, culture and cuisine. Prepare your trip together with OrangeSmile.com - find out the 'must see' things in Otranto, which places to visit, which excursions to take, where the breathtaking views are waiting for you. Planning your trip with this travel guide will help your to get the most out of Otranto in few days.