Sightseeing in Baja Sardinia - what to see. Complete travel guide 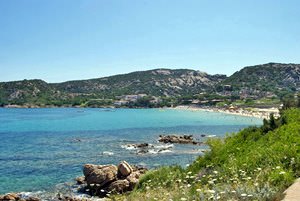 Sardinia is one of the most famous islands in the Mediterranean. This is a place with a long history that starts with the ancient Nuraghe up to the Phoenicians, Arabs and Romans. Currently the island belongs to Italy, but it has its own government. Simply everything is worth wondering on this island. You will find much fun exploring the culture of local people, their Sardinian Italian dialect, and the incredible beauty of landscapes of this place. The terrain here is mainly mountainous, the east coast borders with Gennargentu volcanic massif, which is located in the heart of the island. The Iglesiente massive goes into Monte dei Sette Fratelli and Monti dei Sulchis mountains in the western part of Sardinia. Small rivers run quickly between the mountains, making this place simply perfect for vineyards. There are no industrial enterprises on the island, so everything is focused on tourism and recreation. Because of the purity and cleanliness of local waters Sardinia always wins numerous so-called "blue flags" – the indicators of purity. The total length of beaches in Sardinia estimates approximately 1,850 kilometers. This territory is home to countless amazingly beautiful corners of nature that strike visitors by crystal water and cozy coves. Here azure shores bath in clear waters, largest choice of recreational activities makes people forget about everything, golden sand pleasantly warms legs, and the sun gently caresses with its rays. Everything in Sardinia is created for enjoyment. The most significant attractions include Sardinia Nuraghe fortress, the town of Costa Smeralda, St. Mary's Cathedral in Castello, and the ancient town Cagliari.
A Notre Dame Cathedral is found in the city of Alghero. It is considered the most significant religious structure on the island. The construction of the cathedral was completed in the 16th century. Its architectural appearance is a combination of various stylistic directions. Some of its old parts are in Gothic style, the main facade is decorated in neoclassical style. In the beauty of the interior, it is second to none on the island. The cathedral retains ancient marble finishing elements, magnificent sculptures, and medieval frescoes.
Nearby is the church of St. Michael, which many travelers recognize due to the colorful dome lined in mosaic tiles. This church is a vivid example of Baroque style. The exact date of its construction is unknown. The first official mention of the church dates back to the 14th century. It acquired its present appearance during a major reconstruction in the early 17th century. Copyright www.orangesmile.com
Parts of the old defensive structures, that were actively built to protect the island in the Middle Ages, have been preserved in Sardinia. An excellent example of such a structure is an ancient bastion of Saint-Remy. It is one of the few constructions that managed to survive during the Second World War. Tourists' favorite pastime is to climb the bastion. It gives a wonderful panorama of the city. 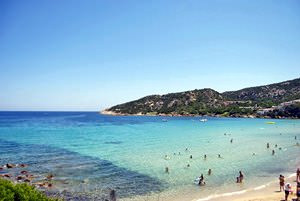 Su Marmuri Caves are the largest ones on the island. There are many large halls and complex branches inside. Tourists can go there with the help of a guide only. The cave will surprise visitors with beautiful stalactites and stalagmites, as well as other incredible formations.
In the immediate vicinity of Cagliari, is located the charming village of San Sperate. Traditional painting murals are its main attractive feature. For several hundred years, local residents have been decorating the walls of their homes with real paintings. Each of these works of art is unique. It'll be really interesting to stroll along the streets of a miniature village. You can admire the old painted houses and other local sights. Many call the village of San Sperate a real open-air art gallery.
This guide to iconic landmarks and sights of Baja Sardinia is protected by the copyright law. You can re-publish this content with mandatory attribution: direct and active hyperlink to www.orangesmile.com.

City tours, excursions and tickets in Baja Sardinia and surroundings

Survived castles around Baja Sardinia
♥   Castle 'Castel sardo' Castelsardo, 69 km from the center. On the map

♥   World Heritage Site 'Gulf of Porto: Calanche of Piana, Gulf of Girolata, Scandola Reserve' , 155.3 km from the center. On the map

Sights around Baja Sardinia from our guide 'Extreme places on Earth' 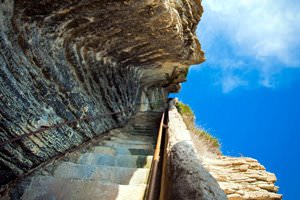 Distance from Baja Sardinia center - 38.1 km.
Although the staircase was built several centuries ago without using any special equipment and technology, it has a number of unique features. The design of the staircase is such that during lifting it, a feeling of "falling up" is created. The rock, in which the stone steps were cut, is directly above the sea, so travellers always have an opportunity to admire marvelous seascapes during the ascent. … Read further 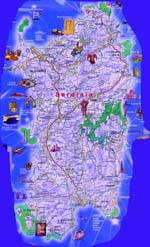 Search touristic sites on the map of Baja Sardinia

Sightseeing in regions nearby Baja Sardinia

Porto Cervo
Porto Cervo is well-known for its exquisite beaches. The coastal water has an amazing emerald shade that shines brightly in the sunrays. Liscia RujaBeach is one of the most popular choices when it comes to sunbathing and swimming in Porto Cervo. This is the longest beach on the southern side of Costa Smeralda. When visiting this tranquil place, it is so easy to forget about ... Open »
Olbia
The Basilica of San Simplicio is the main religious sight in Olbia. The shrine is dedicated to Saint Simplicio, the first bishop in the region. Many local people still honor him and consider Simplicio the city’s patron saint. The church was built in the 11th century. This is a fabulous example of the Romanesque Pisan architectural style. The shrine is comfortably located on ... Open »
Sassari
XVII century was notable mostly for the construction of the first University of Sassari. Later here appeared beautiful historic monuments - Princely Palace (now the city’s administration is located in it), St. Nicholas Cathedral, Giordano Palace decorated in neo-gothic style building, and the building of the province’s administration. In addition to the diversified ... Open »
Ajaccio
Once you’re done with historical sights, you can take a ride on catamaran and enjoy Corsica views. Travelers, who enjoy active rest, may like visiting scuba diving schools that organize night dives and rides to national reserve zones of the coastline. Ajaccio will definitely charm you with its warm home atmosphere. You can visit the city just once and you will definitely ... Open »
Alghero
Do you plan to enjoy warm and tender Sardinian sun? Visit one of the most beautiful beaches in Alghero – Riviera del Corallo. The name of this beach literally means “Coral Riviera”, and this interesting name is not random. There are many corals in the coastal waters near Alghero. As these corals are red, they add an interesting and unusual shade to water. The ... Open »
Sardinia South
The most interesting and probably the most mysterious place is the Su Nuraxi archaeological site located in Barumini area. Archeologists found over 7,000 stone pillars built more than 2.5 thousand of years ago. The site is not only extensive, but perfectly planned and finely built. Pillars survived until nowadays in excellent condition, though their purpose is still unknown. ... Open »

All about Baja Sardinia, Italy - sightseeings, attractions, touristic spots, architecture, history, culture and cuisine. Prepare your trip together with OrangeSmile.com - find out the 'must see' things in Baja Sardinia, which places to visit, which excursions to take, where the breathtaking views are waiting for you. Planning your trip with this travel guide will help your to get the most out of Baja Sardinia in few days.