Sightseeing in Verona - what to see. Complete travel guide 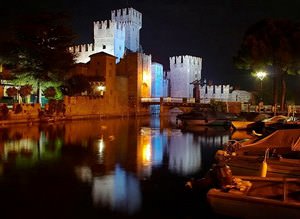 Verona is a cozy provincial town that is also known as the home of Shakespeare’s Romeo and Juliet. In terms of the number of sights and architectural heritage Verona is a worthy competitor to Milan and Rome.
Verona design-hotels for stylish travellers
Some hotels in Verona are characterized by an inimitable design, including upscale Lady Capulet Apartments. Its customers have only four available rooms equipped in one of the invaluable …

Open
Ancient Roman Amphitheater is known as the most famous sight of Verona. It was built yet in the 1st century AD. Moreover, the amphitheater is working and this is the most famous opera theater in the town. Every art connoisseur should definitely visit live performances that take place there for more than a century. You can also see many architectural sights near Piazza delle Erbe. Here you will find an ancient Domus Mercatorum house built in the gothic style and the local town hall. In ancient times the Roman Forum was located on the territory of the square, while Domus Mercatorum was the residence of guilds. Palazzo Vescovile is also a noble architectural building. Built in the 15th century, this palace features 5 statues installed on cornice. The statues show famous people of that time that made a serious impact on Verona and its development.
While making a walk on the streets of Verona, you will see numerous ancient churches and cathedrals on your way. One of the biggest and most famous of them is Santa Maria Antica Church. St. Anastasia Church is also known as the most beautiful building. Its floor is decorated with mosaics made of pink, white and blue marble, and the church’s walls feature magnificent frescos. The halls of the church store pictures of local artists, so this excursion will be very interesting for people who like art. Copyright www.orangesmile.com
Top places to stay in Verona - most luxurious hotels
One of the most luxurious hotels in Verona is Palazzo Victoria. Filled with an atmosphere of luxury and elegance, it occupies an outstanding historic building near the Juliet's House and …

Open
The local Cathedral can be called an example of the architecture of Verona. Built in the 12th century, this building amazes its visitors by rich decorations of halls, which luxurious design is made with rare red marble, gilding and fine murals. The mentioned places are just a small share of sights you can see in Verona. Tourists from all over the world traditionally find much interesting here. 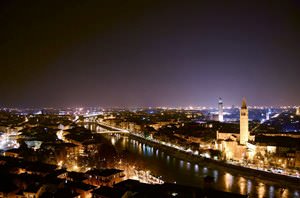 The most romantic site in Verona is the House of Juliet - a beautiful historic building of the 13th century, located on Via Cappello. It was in this house, according to Shakespeare's history, that the family of the Capulets lived. Today in the courtyard of the historic building, there is a sculpture of Juliet. In the building itself, which is the most valuable architectural monument today, there is an interesting museum devoted to Shakespearean characters. This attraction is most often visited by couples in love. They all want to be photographed under the balcony of Juliet, and also leave a note on the wall of the historic building, on which is written a cherished desire.
Old hotels keeping the history of Verona
Verona is a treasure trove of unique historic hotels, some of which are known far beyond Italy. In the heart of the city, you will find Palazzo Maffei Aparthotel opened in a restored …

Open
In Verona, there is also the House of Romeo - a strict building in the medieval style, which was built in the 14th century. According to available historical data, this building has never belonged to the family of Montagues, but admirers of the Shakespearean tragedy still consider it a matter of honor to visit this literary landmark. Currently, the spectacular medieval building is in private ownership, so it will not be possible to admire its interior decoration. 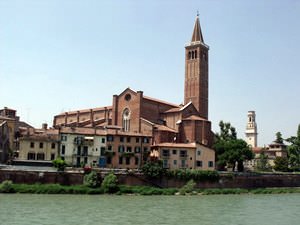 Among the outstanding architectural sights, the Palazzo Maffei should definitely be distinguished. Its construction began in the 15th century, and it was completed only 200 years later. Today, this palace is considered a true masterpiece of baroque architecture. Its facade is adorned with skilful statues of Roman gods, graceful arches and balconies. In the immediate vicinity of the palace is the ancient clock tower Gardello, which was erected as far back as the 15th century. They are usually regarded as a single architectural ensemble.
Legends - famous hotels of Verona
Upscale Due Torri Hotel has remained the most famous and symbolic hotel in Verona for many years. It has long been granted the status of an outstanding city landmark; the hotel is in the …

Open
Travelers who dream of walking around the territory of real ancient castle should go to Castelvecchio. This castle on the banks of the Adige River was built in the middle of the 14th century. For many years, it stood guard over the tranquility of the city. Today in the majestic castle is a very interesting museum with a diverse collection. A collection of weapons, priceless works of art, as well as ancient jewelry can also be seen. Dozens of unique historical and religious monuments are preserved on the territory of Verona. In addition, many unique museums and art galleries operate in the city.

This guide to iconic landmarks and sights of Verona is protected by the copyright law. You can re-publish this content with mandatory attribution: direct and active hyperlink to www.orangesmile.com.
Verona - guide chapters 1 2 3 4 5 6 7 8 9 10 11 12 13 14

Shopping streets in Verona
♥   Shopping area ' Via Mazzini' Verona, 0.3 km from the center. On the map

Survived castles around Verona
♥   Castle 'Castelvecchio' Verona, 0.4 km from the center. On the map

♥   Castle 'Rocca Malaspina' Monterenzio, 18.5 km from the center. On the map

National and city parks around Verona
♥   National Park 'Parco nazionale delle Dolomiti Bellunesi' , 114.5 km from the center. On the map

♥   National Park 'Parco nazionale dell’Appennino Tosco-Emiliano' , 129.7 km from the center. On the map

Art galleries in Verona and around
♥   Art museum 'Castelvecchio Museum' Verona, 0.4 km from the center. On the map

Sights around Verona from our guide 'Extreme places on Earth' 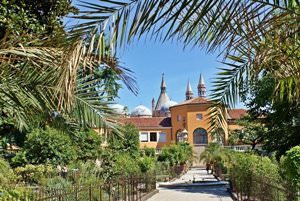 Distance from Verona center - 69.5 km.
The most interesting plants of Europe are kew trees and magnolias. As a long time ago, today in the garden medical herbs are also produced. It is also under the control of the university, that’s why you can see students there. On the territory, you can see about 6 000 types of plants. The oldest Mediterranean palm was planted there in 1585. The territory of the garden was divided into 5 thematic zones. Every zone represents different countries. The garden is well equipped for vacation, there you can find a lot of benches and arbours. … Read further 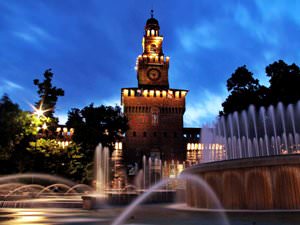 Distance from Verona center - 35 km.
Among the major historical symbols of Mantova, the Cathedral is noteworthy. That’s a project created by the great architect Giulio Romano in the 16th century. The ancient city also has an artistic symbol, the image of the jester Rigoletto. You can see a monument to this character of Victor Hugo play on one of the picturesque squares. Mantova certainly appeals to those who are fond of culture and art of past years, as the city is literally soaked with atmosphere of romance, mystery and inspiration. … Read further

Search touristic sites on the map of Verona

Sightseeing in regions nearby Verona

Mantua
The Italian city of Mantova is more famous as Mantua in tourist circles. This settlement is the center of a province with the same name. Are you interested in architecture, art or history of Italy? A journey to this region will be an interesting and educational experience for you. Mantua is different from usual megalopolis cities that are overcrowded and always noisy. Having ... Open »
Vicenza
Vicenza is a capital of the similarly named province in Veneto region. This city is located 60 kilometers away from Venice and 200 km away from Milan. Vicenza is the city of the global historic and cultural heritage and so it was included in UNESCO list in 1994. Famous architect of the XVI century Andrea Palladio participated in the creation of houses and other buildings in ... Open »
Brescia
The local airport accommodates flights from Barcelona, London, and Rome. After that, a comfortable bus will take you to the city center. It takes thirty-five minutes to get to Brescia by train that departs from Verona. When arriving in Brescia from other Italian cities, the train is usually the most comfortable means of transport. The journey time is forty to fifty minutes, ... Open »
Veneto
Perhaps the most famous city of Veneto is its capital, Venice. Its name has always been associated with graceful canals and bridges, quiet narrow streets and awesome old palaces. It is a city of romance and harmony, captivating with its refined atmosphere. Equally attractive is the town of Belluno; there is a famous hill resort of Cortina d'Ampezzo next to it. Those seeking ... Open »
Padua
According to one version, the founder of this town was a mighty warrior Antinori, whose tomb is not yet found by archaeologists. This is a major cultural center and home to many great artists. The central part of the city consists of three squares – Piazza della Frutta, Piazza delle Erbe and Piazza dei Signiori. The symbol of the city - the magnificent Palace of Reason – ... Open »
Ferrara
Having explored the Ducal Palace, head to his neighbor – the Castello Estense. For many years, an art school was open in this gorgeous building. The ground floor was made for protective purposes, and so it is not very elegant and gracious. That being said, the higher floors are amazing. Balconies made of white stone beautifully adorn the castle. In modern times, the ... Open »

All about Verona, Italy - sightseeings, attractions, touristic spots, architecture, history, culture and cuisine. Prepare your trip together with OrangeSmile.com - find out the 'must see' things in Verona, which places to visit, which excursions to take, where the breathtaking views are waiting for you. Planning your trip with this travel guide will help your to get the most out of Verona in few days.