«« BEGINNING - PART I
Video of flights over top monuments of Venice in HD format.
Use 'Full Screen' mode.
Santa Maria della Salute, San Pietro di Castello, Santa Maria Formosa, Santi Giovanni e Paolo, Gesuati, and La Maddalena are the main candidates that compete for the title of the major architectural symbol of Venice. Just like in the first part of the guide, you can watch each monument by viewing its colorful 3D model in the Venice flyover video on the left. Don’t forget to access our photo gallery and an overview of interesting facts regarding every monument. The map of the most important architecture sights of Venice (located below this guide) will help you to create your own sightseeing tour through Venice. 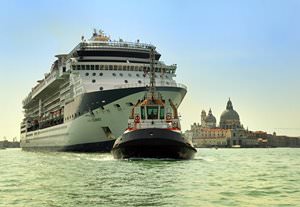 Facts:
» Santa Maria della Salute is the cathedral built in honor of abolition of the plague in 1630-1631, when the disease has claimed more than a third of the city's population.
» The cathedral was built in the shape of an octahedron, with a dome hemisphere.
» The church entrance is designed as a triumphal arch.
» Facade is decorated with sculptures of the Archangel Michael, John the Baptist and the Virgin Mary.
» The altar is decorated with marble statues dedicated to the miraculous abolition of the plague by Virgin Mary. 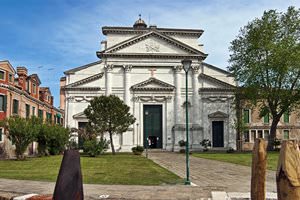 Facts:
» San Pietro di Castello is the Roman Catholic basilica of the patriarch of Venice, located in the Castello Quarter on the same island.
» The current church building dates back to 16th century, but the first church on this site has been built in the 7th century.
» Next to the church there is the bell tower, which stands decimated similar to the Leaning tower of Pisa. In this regard, it’s considered one of the most dangerous in Venice.
» The basilica features several outstanding works of art. Among them, St. John the Evangelist, Peter and Paul, by Paolo Veronese, the altar painting by Giordano in the Vendramin Chapel and the Throne of St. Peter carved out of gravestone in the 13st century are notable.
» The church is decorated with a large dome showing importance of the basilica. The dome is mounted on the dome drum with numerous rectangular windows, so there is much light inside. 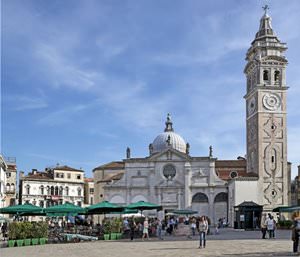 Facts:
» Santa Maria Formosa was built in 1492, designed by Mauro Koducci.
» One of the interesting architectural features of the church is cream building corbels called apses.
» Another amazing thing is one of the few baroque details of the temple, a grotesque mask at the foot of the bell tower.
» There are several masterpieces of Venetian painting school representatives in the church; Saint Barbara with the Saints by Palma il Vecchio is the main of them.
» Another masterpiece situated in the church is the triptych Madonna della Misericordia by Bartolomeo Vivarini. 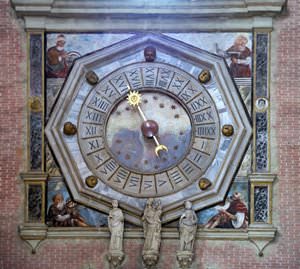 Facts:
» Santi Giovanni e Paolo is one of the biggest and most famous cathedrals of Venice.
» Twenty five Doges of the Venetian Republic and many other prominent personalities were buried there.
» The cathedral has a very large number of works of art.
» Santi Giovanni e Paolo has no bell tower.
» The cathedral has impressive dimensions; it’s 101.6 meters long, 45.8 meters wide and 32.2 m high. The walls are decorated with numerous monuments. 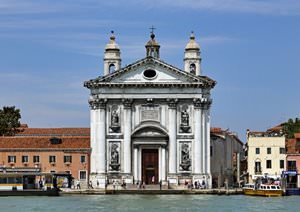 Facts:
» The Baroque facade of Gesuati is decorated with columns, cornices, carved angels and saints.
» Interior of the temple is unusual for Venice. Gold and white stucco, as well as green and white marble were used for decoration.
» The Gesuati Church houses the famous painting by Titian, The Martyrdom of St. Lawrence.
» Once, Theophile Gautier, the famous French poet and critic, said that interior decoration makes the chapel of the Virgin to look like a boudoir of an operetta singer. 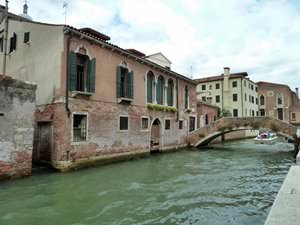 Facts:
» La Maddalena is located in Venice's Cannaregio.
» The church was built in the neoclassical style.
» The architect, Tommaso Temanzza, wanted to reproduce the Roman Pantheon in the construction.
» Today the church isn’t working and is only open on special occasions.

Plan your own tour over Venice on the monuments map

Search for architecture monuments of Venice on the map

Tours through neighbours of Venice