Sightseeing in Veneto - what to see. Complete travel guide 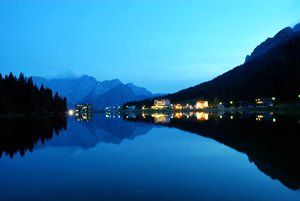 Perhaps the most famous city of Veneto is its capital, Venice. Its name has always been associated with graceful canals and bridges, quiet narrow streets and awesome old palaces. It is a city of romance and harmony, captivating with its refined atmosphere. Equally attractive is the town of Belluno; there is a famous hill resort of Cortina d'Ampezzo next to it. Those seeking peace and quiet atmosphere enjoy resting there; these places doesn’t have the fuss of large cities.
Best beaches and recreation areas around Veneto
The so called Venetian Riviera includes lots of beautiful resort zones located on the Adriatic Sea shore around Venice. There are elite resorts for the most demanding travelers and also …

Open
Padua is the famous tourist center. In past centuries it was known as a major university center; today it attracts millions of pilgrims who come to worship the relics of St. Anthony. Vicenza will appeal to those who know the history and love to participate in fascinating excursions. There are the ruins of the ancient Roman Theatre, Aqueduct and bridge in the city. The church of San Lorenzo, which has being built for almost a hundred years, is among younger monuments of the city. These are several must-see places too.
The romantic city of Verona is known worldwide thanks to the tragic story of Romeo and Juliet. The chief ornament of the city is the Arena di Verona where opera is performed in warm months. Castelvecchio castle, the Basilica di San Zeno and the old Scaliger Bridge are notable too. Continue exploring cultural objects of Veneto during a walk around Rovigo; Concord Academy is considered its most striking landmark. Today it houses the large art gallery, where visitors can admire works by Venetian artists. Copyright www.orangesmile.com
Top hotels in Veneto for business trip or short vacation
Veneto region has more than 3,000 accommodation places to offer. Even the smallest town in the area has various hotels to choose from. Antico Panada hotel located in San Marco area, Venice, …

Open
There are many medieval monuments and cultural institutions in Treviso. Urban neighborhoods resemble scenes from old movies about medieval kings and knights; you can learn about the history of the city and get acquainted with its cultural heritage in one of the local museums. A tour around Veneto cities would give a lot of experience. Those who are fond of quiet relaxation, as well as fans of noisy parties and night entertainment would find a suitable place there. 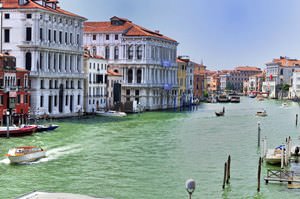 The region of Veneto is rich with enchanting beaches that spread over 100 km. Most of the beaches are suitable for family recreation. Many beaches of Veneto have won the highest awards for their environmental indicators. The most famous and most popular beach resort is Lido di Jesolo. It offers its guests the luxurious beach with golden sand that spreads over 15 km.
Cuisine of Veneto for gourmet with top restaurants and cafe
Veneto is a paradise for gourmets and the birthplace of simple and surprisingly delicious dishes. The national cuisine is based on seafood, delicious meats and seasonal vegetables; it …

Open
The resort attracts different people. At the coast, there are upscale modern hotels, private villas, and special camping sites. Lido di Jesolo is a beautiful old town that has preserved its historic attractions and traditions. One of its main symbols is an old lighthouse. In the city surroundings, you can walk along wonderful pine groves. 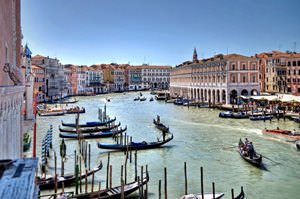 Near it, there is an enchanting family resort, Eraclea. Its main value is amazing nature. It is interesting not only to enjoy beach recreation, but also walk along picturesque places here. At the resort, there is a horse riding center. In a warm period, hiking and cycling tours are organized for tourists. Near the resort, there is the National Del Mort Park where rare birds dwell.
Authentic traditions, festivals and lifestyle of Veneto inhabitants
The annual Carnevale di Venezia is a universal event. Venetian masks long remain undisputed symbol not only of Venice, but of the entire region. Not everyone knows that a few centuries ago …

Open
The beach resort of Lido di Venezia is one of the most prestigious and most top-rated in the region. At the beginning of the 20th century, the richest Italian people built their luxurious villas here. The city has preserved a lot of beautiful historic buildings. Today, many old houses serve as luxurious hotels. The main value of the resort is its beautiful and well-equipped beach. 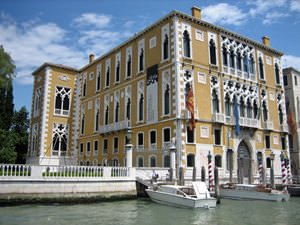 In Veneto, there are less known resorts that are distinguished by a calm and peaceful atmosphere even in the middle of the tourist season. One of such resorts is the historical town Caorle that is often called Small Mesopotamia for its enchanting landscapes. The resort of Rosolina is located on the territory of the incredibly beautiful national park. Chioggia attracts tourists with its historical charm. One of the youngest resorts of the region is Bibione but not so many tourists know about it. Here, the travelers can visit the well-equipped beach, modern hotels, restaurants, and entertainment centers.

This guide to iconic landmarks and sights of Veneto is protected by the copyright law. You can re-publish this content with mandatory attribution: direct and active hyperlink to www.orangesmile.com.
Veneto - guide chapters 1 2 3 4 5 6 7 8

Survived castles around Veneto
♥   Castle 'Cittadella' Padua, 14.5 km from the center. On the map

♥   Castle 'Palazzo Porto Colleoni Thiene' Thiene, 17.6 km from the center. On the map

♥   Castle 'Castello Colmirano' Alano Di Piave, 24 km from the center. On the map

National and city parks around Veneto
♥   National Park 'Parco nazionale delle Dolomiti Bellunesi' , 52.6 km from the center. On the map

♥   Nature Park 'Hochgebirgsnaturpark Zillertaler Alpen' , 141 km from the center. On the map

Sights around Veneto from our guide 'Extreme places on Earth' 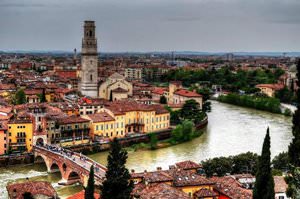 Distance from Veneto center - 66.1 km.
Fans of museums won’t be bored in Verona, too. The Archaeological Museum is one of the most interesting and most visited in the city. As noted earlier, the whole area of ​​Verona and its surroundings is an important archaeological area where a lot of priceless artifacts dating back to ancient Greece and Rome were found. Romantic Verona with its picturesque canals and pedestrian bridges is perfect for walking and a relaxing holiday. This city without doubt is one of the most amazing in the world. … Read further

Distance from Veneto center - 65 km.
In 1117, the building was badly damaged during the earthquake, part of its outer ring was destroyed. Its stones were used by locals to build residential and farm buildings. In the Middle Ages, the ancient arena was used to execute heretics and conduct knight tournaments, and in the 18th and 19th centuries it was used to hold bullfight. Since 1913, the Verona Arena is a permanent venue for opera performances, which everyone can visit. Arena di Verona is considered the largest and most visited opera theater of the planet, which annually receives about 600000 spectators. … Read further 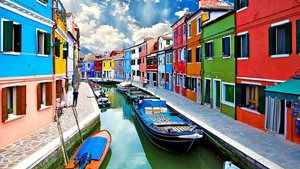 Distance from Veneto center - 64.4 km.
The population of the amazing island city is about 2700 people. The miniature town is interesting not only for its architectural peculiarities, but also for its cultural traditions. From the 16th century, Burano is considered a major center of lace production. In this craft locals reached incredible heights. Many tourists visit the island city especially to buy beautiful lace fabrics in local stores, as well as to visit the Venetian Lace Museum located on its territory. … Read further 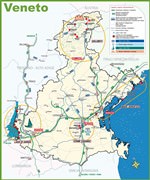 Search touristic sites on the map of Veneto

Sightseeing in regions nearby Veneto

Vicenza
Famous architect of the XVI century Andrea Palladio participated in the creation of houses and other buildings in Vicenza. He also created projects for numerous palaces, luxurious villas and public facilities. In Pinacoteca di Palazzo Chiericati you can see works of the no less great artist Giovanni Battista Tiepolo. Also don’t forget to visit a public facility building ... Open »
Padua
Not far away from the squares is located one more place of interest - one of the oldest schools in Europe - Padova University. It was founded in 1222; Galileo himself taught in the walls of this university, as well as many other famous physicists and mathematicians. If eight centuries ago the number of students of the university was approximately 500 students, today their ... Open »
Treviso
If you want to see main sights of this place, move your feet to the central square named Dei Signori. Palazzo dei Trecento is the oldest building, the construction of which took place in the 13th century. The building is created according to the best traditions of the Romanesque style. Duomo Cathedral is located just opposite to it. An amazingly beautiful chapel adorned with ... Open »
Mestre
Start your observation of most notable sites of Mestre from the central square called Piazza Ferretto. The observation areas of the Torre dell'Orologio tower feature a magnificent view of the city. After enjoying the beauty of bird's eye views of the town and getting down to earth, you will find several open-air cafes and restaurants that serve traditional Italian dishes, as ... Open »
Venice
The basilica itself has often been the victim of looting. Thus, during the capture of Venice by Napoleon, jewels that decorated the icons of the golden altar (Pala d'Oro) and the main altar of the church were stolen. However, these days the composition made of numerous medium-sized icons is in a fairly good condition. The Napoleon army also stole the front quadriga, but it was ... Open »
Verona
While making a walk on the streets of Verona, you will see numerous ancient churches and cathedrals on your way. One of the biggest and most famous of them is Santa Maria Antica Church. St. Anastasia Church is also known as the most beautiful building. Its floor is decorated with mosaics made of pink, white and blue marble, and the church’s walls feature magnificent frescos. ... Open »

All about Veneto, Italy - sightseeings, attractions, touristic spots, architecture, history, culture and cuisine. Prepare your trip together with OrangeSmile.com - find out the 'must see' things in Veneto, which places to visit, which excursions to take, where the breathtaking views are waiting for you. Planning your trip with this travel guide will help your to get the most out of Veneto in few days.