Sightseeing in Pavia - what to see. Complete travel guide 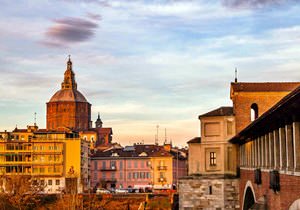 Hidden among rice fields in Italy, Pavia is a small but charming old town. This is one of the most impressive settlements in Lombardy. For many centuries, local authorities have maintained the original look of the historic center. Moreover, the town is a great place to enjoy the exploration of ancient Romanesque churches and see old houses reminiscent of towers. Many internationally famous poets and artists lived and worked in Pavia: Petrarca, Leonardo da Vinci, Carlo Goldoni, and talented Italian poet Ugo Foscolo. Nowadays, Pavia is not only an old settlement with rich cultural heritage but also a popular university town. A large number of students adds a lively spirit to the centuries-old settlement. Unlike many towns of similar size, life doesn’t stop in Pavia after sunset.
Ancient Ligurians were the first settlers in the area. They called this area Ticinum. In 476, Roman patrician Orestes completely destroyed the town during the fall of the West Roman Empire. Fourteen years later, King Theodoric built the first palace on the ruins of the old town. Soon after that, a theatre and baths appeared in Pavia. To protect the settlement from the enemy invasions, the town got thick fortress walls. However, this was not enough to save the town from the Byzantine commander Narses. In 572, Lombards became the new rulers in the town. They changed the settlement’s name to Pavia.
At the beginning of the 70s of the 8th century, Charlemagne captured the town. It took the legendary king many days to get Pavia – the Italian settlement was struggling and capitulated only after a long siege due to hunger. Soon after that, Charlemagne was crowned in Pavia as the King of Lombards. At the edge of the 12th and 13th centuries, Pavia was a self-governing town. The settlement supported the Ghibellines in its rivalry with Milan. The forces were not equal and the protesters had to accept the dominance of Milan and bow to the Visconti family. The Battle of Pavia, which took place in 1525, was one of the major fights in the Italian War. During the battle, King Francis I was imprisoned. After this event, the Habsburgs were ruling the region for the next three hundred and fifty years. Copyright www.orangesmile.com
Certosa di Pavia is the most famous attraction of this Italian town. This is a Carthusian monastery complex situated eight kilometers from the city center. Before the monastery, there was an old church on this site. The church was built in the 14th century and was reconstructed and rebuilt several times afterward. At the end of the 15th century, in 1497, the church got the look that visitors can see today. The sacred building was consecrated even though inner works were not finished yet. The shrine became a national landmark in 1866. 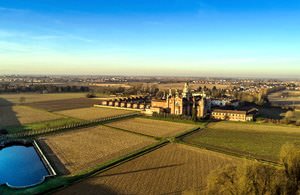 Certosa di Pavia is an eclectic building, the architectural style of which is a skillful combination of Northern Gothic and Florentine styles that were popular during the Renaissance period. Inside the monastery, visitors can see true masterpieces by worldwide famous artists such as Borgognone and Perugino. There are also works by Luini and Guercino in the monastery. Tourists arrive in Pavia to see the famous tomb of Visconti, a beautiful bronze chandelier, and gorgeous stained glass windows that decorate the monastery’s hall. Having explored the building, visitors can go to the courtyard to see a gorgeous garden. A small portal with fabulous sculptures by Mantegazza and Amadeo leads to the garden.
Would you like to turn into an Italian duke for a short time? A beautiful palace named Castello Visconteo or Visconti Castle appeared in Pavia in the 60s of the 14th century. Initially, this was a fortress, the main purpose of which was to protect the territory of the settlement from enemy attacks. To make the fortress more impenetrable, it was decided to surround it with thick walls. In 1392, a smaller fortress was built inside the complex. This small fortress was the location of barracks for mercenaries. A moat filled with water separated the opposite sides. At a certain period, the fortress was turned into a prison. Many enemies captured during battles were then sent to this prison. 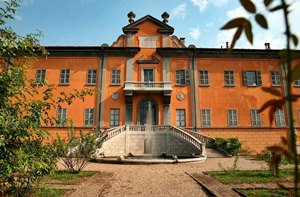 For many years, the castle was the residence of the Visconti dynasty despite the fact that Milan was the capital of the duchy. The duke ordered to build a bridge over the moat and make a [ark near the castle. The Visconti Castle was the largest residence of the powerful family. The size of the estate was big for that time – the castle’s length and width were roughly one hundred and eighty meters. Filippo Maria Visconti spent his last days in solitude in this castle. He was the last member of the Visconti dynasty. Nowadays, there is a museum open in the castle. This museum is dedicated to the history of Pavia. The adjacent park is a favorite recreation area for both tourists and citizens.
Pavia and Milan have a railway connection with trains moving between the two cities every half an hour. The distance is short so the journey time is roughly thirty minutes. If you enjoy looking at the surrounding nature on the go, consider buying tickets to a commuter train to Pavia. This train is significantly slower – the ride lasts one and a half hours. It is also possible to reach the university town by bus. There are many daily buses from Milan’s bus station to Pavia. The journey time is thirty to forty minutes in this case.
This guide to iconic landmarks and sights of Pavia is protected by the copyright law. You can re-publish this content with mandatory attribution: direct and active hyperlink to www.orangesmile.com.

City tours, excursions and tickets in Pavia and surroundings

Survived castles around Pavia
♥   Castle 'Civic Tower of Pavia' Pavia, 0.4 km from the center. On the map

♥   Castle 'Belgioioso Castle' Belgioioso, 12.4 km from the center. On the map

National and city parks around Pavia
♥   World Heritage Site 'Monte San Giorgio' , 82.7 km from the center. On the map

♥   National Park 'Parco nazionale dell’Appennino Tosco-Emiliano' , 126.5 km from the center. On the map

Art galleries in Pavia and around
♥   Art museum 'Pinacoteca Ambrosiana' Milan, 31.1 km from the center. On the map

♥   Art museum 'Pinacoteca di Brera' Milan, 32 km from the center. On the map

Sights around Pavia from our guide 'Extreme places on Earth' 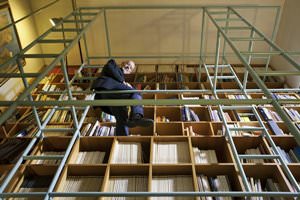 Distance from Pavia center - 32 km.
Mario Bellini was not engaged in the arrangement of his house on his own. He considers this approach extremely difficult and illogical. The architect believes that there should always be a desire to try something new in life. In his opinion, the arrangement of housing is an excellent chance to realize such an aspiration. The owner's caring attitude to the works of art and accessories in the style of the past years is visible in the interior of the house. There are wonderful Renaissance paintings and furniture made of dark wood here. … Read further 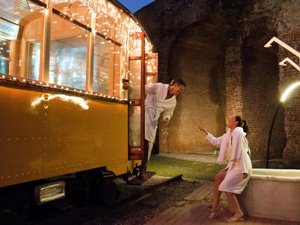 Distance from Pavia center - 31.6 km.
Initially, the organizers wanted the sauna-tram to cruise the streets of the city, and its visitors could admire outstanding sights and the most beautiful streets of Milan. City authorities did not approve of such an initiative, and the sauna has been decided to be installed in one of the busiest districts of Milan, close to popular hotels and entertainment venues. … Read further

Search touristic sites on the map of Pavia

Sightseeing in regions nearby Pavia

Milan
St. Ambrogio Basilica. Ambrogio, a former Bishop of Milan, (IV century) is considered the patron saint of the city. The temple, which is named after him, is the oldest church in the city and, according to many, the most beautiful in its simplicity. The basilica is primarily famous thanks to the sarcophagus of the Roman general Stilicho, the golden altar of the IX century ... Open »
Piacenza
Piacenza is one of the oldest cities in Italy, which is rich in symbolic places. It attracts tourists by large choice of excursion routes. Start your acquaintance with the history of the city from visiting Municipal Museum built in the 16th century. It hosts several collections of paintings and sculptures. The most valuable item of the collection is a picture of Botticelli, ... Open »
Monza
This town is located near Milan. Monza is well-known to all fans of Formula 1, because the main airfield is located here. First settlements on the territory of the town were founded during the Bronze Age; later this area was inhabited by colonies of Roman veterans. It is believed that they have given the city its modern name. These veterans were called Magutachi and moved from ... Open »
Lombardy
The region's capital is Milan, the city of fashion and art. The best fashion shops and boutiques attended by celebrities can be found on Via della Spiga and Via Montenapoleone. In addition to luxury shops, there are many cultural venues, many of which are known far beyond the country. La Scala Theatre, The Sforzesco Castle, the Cathedral, Church of Santa Maria delle Grazie and ... Open »
Como
Once you finish the observation of the mentioned sights, it’s time to make a walk on the port district of the city as on its territory is located one more famous historical monument – Duomo Cathedral. The building will be interesting to tourists because it has been remade a number of times during its history. The modern look of the cathedral features traits of gothic and ... Open »
Varese
Not far away from the church is located a small picturesque village that still keeps several houses built during medieval times. While walking on narrow streets you can see many shops and outlets on your way where you can buy memorable souvenirs created by local masters. There are several attractive villas on the territory of the city. Each villa has its own cultural ... Open »

All about Pavia, Italy - sightseeings, attractions, touristic spots, architecture, history, culture and cuisine. Prepare your trip together with OrangeSmile.com - find out the 'must see' things in Pavia, which places to visit, which excursions to take, where the breathtaking views are waiting for you. Planning your trip with this travel guide will help your to get the most out of Pavia in few days.