Sightseeing in Bolzano - what to see. Complete travel guide 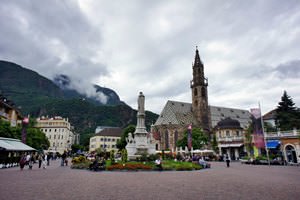 Bolzano is located in one of Italian regions and is an administrative center of the autonomous region Bolzano. The country has three most widely used languages – Italian, German and Rhaeto-Romanic. However, we should mention that the biggest part of the region’s citizens is Germans.
Top places to stay in Bolzano - most luxurious hotels
Bolzano has a lot of luxury hotels, and Four Points Sheraton Bolzano Bozen is well known to fans of the first-class recreation. In addition to classical rooms, it offers guests executive and …

Open
Earlier the territory of the city was full of numerous swamps and only in15 BC the son of the Emperor August decided to build here a bridge and several watching towers.

Later this land got into ownership of bishop Trento and he made an order to build a big city there. The city was rebuilt and expanded many times and this action was so systematic that today we can see lots of buildings referring to different architectural styles and periods. This doesn’t make Bolzano unattractive and adds unforgettable charm to the city, moreover, here you can see multiple buildings that are known as masterpieces created by many great masters.
The local gothic cathedral will definitely attract your attention. It was built in 1295. Actually, the building started earlier and it was planned to be made in the Roman style. However, that didn’t happen and the building was finished only in the 15th century, bringing many traits of gothic style to the cathedral. Today this magnificent building is 65 meters high and has a belfry. This is not the only sight in the city and Bolzano has many cultural and historical sights. Copyright www.orangesmile.com
Old hotels keeping the history of Bolzano
In a walking distance from the railway station of Bolzano is historic Hotel Stiegl Scala that was opened back in 1898. The hotel has managed to preserve elements of its original interior and …

Open
Those fond of taking walks will surely enjoy Bolzano; one of the most beautiful streets of the city is considered to be Via dei Portici. On this historic street there are lots of unique buildings, decorated stucco mouldings, today many historical buildings feature interesting shops. Each of the buildings located on the street has its particular features, the search for which is one of the tourists’ favourite activities. Incredibly beautiful mouldings, preserved wooden shutters, original jewellery and baroque frescoes are present in this historic area, so you can take a lot of interesting photos. 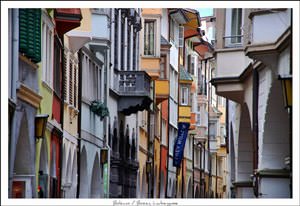 Not far from the historic centre of Bolzano is a beautiful castle Marecchia, beautifully preserved after hundreds of years. It is most interesting to visit this ancient castle in the warmer months; it is surrounded by a large and beautiful garden; in which it will be relaxing to take a walk.
Best hotel choice for romantic escape, wedding or honeymoon in Bolzano
Bolzano has many attractive hotels offering a romantic setting, and Hotel Eberle would be great for couples. The hotel is located in an incredibly beautiful natural area surrounded by …

Open
In the immediate vicinity of Bolzano is the Roncole castle, it was built in the first half of the 13th century. The main value of the old castle is considered to be medieval frescoes, which show various scenes from the life of the court. In 2000, the castle was completely renovated, now guided tours are held there regularly. 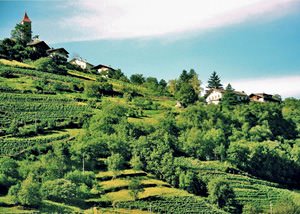 Among the religious sites Franciscan monastery should definitely be noted, it was built over 800 years ago and today is one of the oldest buildings, not only in the city but in the whole country. In the Middle Ages the monastery was surrounded by a thick wall, which also managed to survive to the present day. In the monastery there are numerous unique elements of decoration, including frescoes from the 14th century.
Shopping in Bolzano - main shopping streets, outlets and boutiques
The most popular shops in Bolzano are centered around Obstmarkt, where many attractive shopping streets originate from. Here, you'll find curious designer boutiques, where one can choose …

Open
Those fond exploring the museums, too, will not be bored in Bolzano: here they can visit the Archaeological Museum of South Tyrol. Its most valuable exhibit is "snowy mummy Ötzi" - the ancient man who froze to death in the Alps more than 5000 years ago. The city has a very interesting Museum of Modern Art, which regularly hosts a variety of exhibitions, and one of the most unusual museums is considered to be the Museum of Trade. It occupies a renovated building of the Mercantile palace, and presents to the visitors an extensive exhibition on the history of economic development of the city. For saving tourists it is worth noting that all the museums of the city are free to visit on certain days of the week.

This guide to iconic landmarks and sights of Bolzano is protected by the copyright law. You can re-publish this content with mandatory attribution: direct and active hyperlink to www.orangesmile.com.
Bolzano - guide chapters 1 2 3 4 5 6 7 8 9 10 11

Survived castles around Bolzano
♥   Castle 'Castel Mareccio' Bolzano, 0.9 km from the center. On the map

♥   Castle 'Treuenstein Castle' Bolzano, 1.8 km from the center. On the map

♥   Castle 'Runkelstein Castle' Bolzano, 2.2 km from the center. On the map

♥   Castle 'Sigmundskron Castle' Bolzano, 4.4 km from the center. On the map

National and city parks around Bolzano
♥   World Heritage Site 'The Dolomites' , 38.5 km from the center. On the map

♥   National Park 'Parco nazionale dello Stelvio' , 63.3 km from the center. On the map

♥   Nature Park 'Hochgebirgsnaturpark Zillertaler Alpen' , 71.6 km from the center. On the map

♥   Nature Park 'Kaunergrat-Pitztal-Kaunertal' , 88.6 km from the center. On the map

Sights around Bolzano from our guide 'Extreme places on Earth' 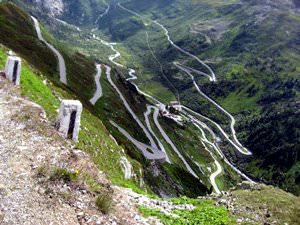 Distance from Bolzano center - 69.3 km.
The Italian Government is very concerned about the safety of drivers, so the track Stelvio Pass has been upgraded over the past few years. Beside the hairpin bends, the angle of which can reach 180 degrees, were built the so-called small "pockets" - descents that allow you to skip the oncoming car and make travelling on the road more comfortable. The Stelvio Pass road designed by the renowned engineer Carlo Donegani is a landmark of world importance nowadays and is one of the most mountainous trails of the planet. The road with many steep turns attracts both motorists and cyclists. Moving along it on two-wheeled transport is also very interesting. … Read further 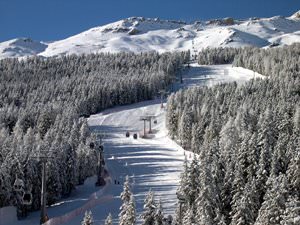 Distance from Bolzano center - 67 km.
One of the most distinctive peculiarities of the health resort is the thermal springs located on its territory, near which the modern health centers were opened. The ski season on Santa Caterina Valfurva takes quite long. On some high mountain passes you can ski since the second half of November until the end of May. Santa Caterina Valfurva is not only a good spa for fans of the extreme sports, but also a very picturesque area, where you can relax at any time of the year. … Read further

Search touristic sites on the map of Bolzano

Sightseeing in regions nearby Bolzano

Merano
In the first half of the 15th century, the reigning Duke Friedrich IV ordered to change the capital of Tyrol and moved his residence to another developing settlement – Innsbruck. Naturally, this had a devastating impact on the former center of the county. Merano quickly lost its importance, and the town’s economy suffered from a recession. When World War I ended, Italy ... Open »
Arabba
Besides skiing, tourists are welcome to visit local places of interest that will help them learn more about the history and culture of Arabba. An old mill is the first landmark that is worth exploring. The mill is still in a working condition but it doesn't make flour anymore. For many years, the mill was providing food for locals, but it became worn out with time. ... Open »
Solden
The region is also famous for its unique natural attractions. Every year, Sölden is visited by thousands of tourists attracted to these places by unique pine forests. Walking through the reserved areas is organized all year round for tourists. However, in the warmer months, much more prominent natural landmarks are available for them. The ultra-modern Austrian resort is also ... Open »
Cortina d Ampezzo
Besides usual ski trails, there are many hills suitable for such an exciting family activity as toboggan. By the way, tourists do not need to worry about any equipment. They can always rent everything they need. Kids never feel tired in Cortina d’Ampezzo because a team of talented animators works at the resort every day. Many hotels have rooms for children with interesting ... Open »
Fulpmes
As noted above, despite recent enormous changes Fulpmes maintains its inimitable historical atmosphere. There are many interesting attractions. Local residents consider St. Vitus Church as one of the main symbols of the village. The main cultural center of Fulpmes, Museum blacksmithing, is dedicated to the most important national craft of local residents. Although crafts have ... Open »
Mayrhofen
The town has excellent infrastructure for travelers with children, and there are many fabulous shops and restaurants. Young tourists will not be disappointed as well – Mayrhofen offers a wide range of amazing bars and nightclubs. This Alpine resort is a fantastic holiday destination all year round. In winter, fans of winter sports are, without a doubt, the biggest category ... Open »

All about Bolzano, Italy - sightseeings, attractions, touristic spots, architecture, history, culture and cuisine. Prepare your trip together with OrangeSmile.com - find out the 'must see' things in Bolzano, which places to visit, which excursions to take, where the breathtaking views are waiting for you. Planning your trip with this travel guide will help your to get the most out of Bolzano in few days.