Sightseeing in Imola - what to see. Complete travel guide 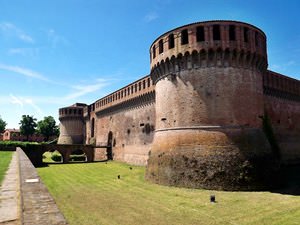 Imola is a relatively small provincial town that attracts visitors by its ancient architectural places of interest, wonderful museums and unforgettable landscapes. However, these facts are not the reasons for popularity of this place. There is a highway that is used in one of stages of Formula 1 competition nearby the town. When the compatition takes place in this region, the population of the city increases in several times. Fans of this sport come to Imola from different parts of the world. In 1988 a tragedy happened on the highways of Imola. A famous driver Ayrton Senna died there after a car accident.
Advices to travellers: what you should know while being in Imola
1. When exchanging money at exchange offices, do not forget to check not only the exchange rate but also the service fee charged. The fee can vary significantly in different offices. Some …

Open
When describing the sights of the town, we simply cannot fail to mention Castelli Rocca Sforzesca di Imola located on the central square of the town. The building of the castle started in 1332. Prior to this this area was occupied by the town’s fort tower. During the Renaissance period new military facilities started appearing on the territory of the city and their protection required more large-scale buildings. The building of the castle was ruled by the famous military persona Gian Galeazzo Sforza. The castle was named to honor its creator. This powerful facility managed to survive up to our days; it managed to survive after numerous attacks and many times the castle played the crucial role during protective activities. In the beginning of the 20th century the castle played the role of a prison used to keep the Nazi criminals. Today the building is fully turned into a museum complex.
Santo Domenico Church is also worth the attention of tourists. It was built in the middle of the 15th century. This is an elegant gothic building, which main decoration is a magnificent portal. San Cassiano Cathedral is the oldest building in Imola. Its building was finished in the 11th century. During such a long history the church was rebuilt several times, but it managed to keep its original shapes. A library is opened nearby the church. If you decide to visit it, you will be able to see first editions of ancient books and priceless manuscripts. Copyright www.orangesmile.com
Cuisine of Imola for gourmet with top restaurants and cafe
Imola is rich in restaurants specializing in Italian cuisine, and each of them tries to amaze its guests with the original menu and an interesting entertainment program. Osteria Callegherie …

Open
In addition to an ancient fortress, the city still has many unique buildings of the 15th century. One of the oldest buildings in the city is the Church of St. Augustine, which was built in the 13th century. In this church, there are many original elements of design and unique religious relics, which can be admired today by absolutely everyone. 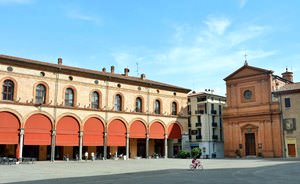 Lovers of architecture will certainly like the beautiful palaces of Riario and Volpe. The latter is also known to many travelers under the unofficial name of “The Fox Palace”. In many ancient palaces today, are open interesting museums, which present visitors with rich collections of ancient works of art, antique furniture and other intriguing items of antiquity.
Authentic traditions, festivals and lifestyle of Imola inhabitants
Imola is widely recognized as the motherland of the internationally famous brand Ducati. That is the reason why this city regularly hosts interesting rally and racing events. In Imola, there …

Open
Fans of art will be interested to visit the Museum of Risorgimento, which is also located in a classy palace. Here, you can see wonderful paintings and tapestries of local artisans. Some works of art are more than 300 years old. 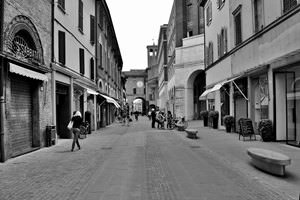 Travelers with children in Imola will be interested to visit the Museum of Science. There are a lot of original interactive exhibits in it. During the excursion, visitors are offered to conduct interesting experiments on their own. The tour of this museum promises to become incredibly cognitive, not only for children, but also for adults.
Excursion over cultural sights of Imola - 'must visit' points of interest
Imola is a modest provincial city that, nevertheless, has some priceless architectural landmarks. The city is also famous for its natural places of interest, so vacationers can easily …

Open
In the immediate vicinity of the city is the old winery Tre Monti, whose name from Italian literally translates as “Three Mountains”. It is also a popular sightseeing facility. In this winery, exciting excursions are organized for tourists. During the tour, vacationers will be offered to take a walk through the old vineyards. Just like many years ago, today chemical fertilizers are not used at all. In addition to wine, grappa is also produced in this old factory. An excellent store works here. 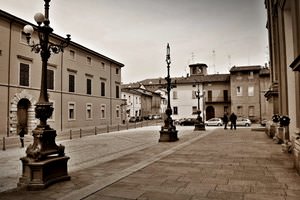 In addition to historical attractions, Imola is famous for its picturesque natural places. In the vicinity of the city, there is a huge selection of interesting places for hiking and cycling. If you do not want to go far beyond the city, you can stroll through the wonderful Parco Tozzoni. It is very large and beautiful and on its territory, there are huge fir trees, as well as many other interesting plants and trees. Here you can easily find a place for a secluded holiday.

This guide to iconic landmarks and sights of Imola is protected by the copyright law. You can re-publish this content with mandatory attribution: direct and active hyperlink to www.orangesmile.com.
Imola - guide chapters 1 2 3 4 5 6

City tours, excursions and tickets in Imola and surroundings

Survived castles around Imola
♥   Castle 'Rocca Sforzesca' Imola, 0.7 km from the center. On the map

♥   Castle 'Monte Battaglia' Casola Valsenio, 17.5 km from the center. On the map

Sights around Imola from our guide 'Extreme places on Earth' 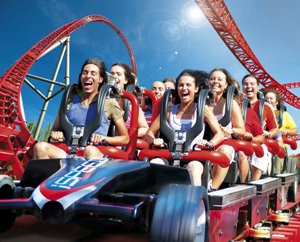 Distance from Imola center - 44.8 km.
Some of the attractions featured in the park are truly unique. The attraction of Katun is liked by visitors who dreamed of becoming cosmonauts in childhood. The fans of the breathtaking feelings can recommend the incredibly high rocking Pakal. The Giant Wheel Eurowheel was entered into the Guinness Book of Records. At the time of the opening, it was the tallest Ferris wheel on the planet, located in the entertainment park. A few years ago, the park infrastructure was supplemented by the large Aquapark, which covers 100 square kilometers. … Read further 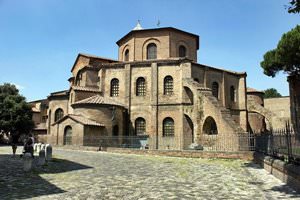 Distance from Imola center - 40 km.
Its visitors can admire the most beautiful elements of marble decoration today. The interior walls are almost completely lined with it. The old floor is also preserved in the basilica. It is decorated with an unusual geometric ornament. Elaborate mosaics with biblical and historical motifs make the Basilica of San Vitale look like an art museum. It will not be enough for one excursion to appreciate the splendor of all the works of art. The exterior of the basilica seems more than modest with all its chic interior decoration. A very beautiful garden is laid out around the religious landmark today. … Read further

Search touristic sites on the map of Imola

Sightseeing in regions nearby Imola

Bologna
Even though wonderful walls of the city were partially destroyed yet in 1903, they managed to leave their unforgettable influence on the modern city. Because of this fact the city got additional space and so a wonderful and broad Independence Street was built. The city features wide selection of museums, education institutes, theaters and cinemas. Moreover, here you will be ... Open »
Ravenna
Mausoleum of Galla Placido is one of the unique buildings of this city. Here have remained the oldest mosaics in Ravvenne. The mosaics are a precious piece of art. Basilica of San Vitale is known as one of the most beautiful churches. Its building took place in the middle of the 6th century. The facade of the basilica is decorated with beautiful carvings with gliding, and the ... Open »
Emilia-Romagna Region
An acquaintance with historical past of the region should start with a visit to the capital. The starting point of most tour programs is the center of Piazza Maggiore. The most important historical and architectural attractions are concentrated around the square. Those include fabulous Chiesa di San Petronio, as well as the building of Palazzo Comunale that has managed to ... Open »
Cesena
By the way, this town still has something to admire. The building of the country's first public library is very beautiful. Be sure to inspect it from the inside as well. The hill is also the location of Rocca Malatestiana, the castle built during 1380 - 1480. By the way, the library is also linked with the name of this feudal family. Another attraction, which is unjustly ... Open »
Ferrara
The cathedral was built in the 12th century. Initially, this is a Romanesque building, but it got distinctive gothic traits over the next two centuries. The cathedral looks in a marvelous and unusual way as if it is made from lace. Such skillful and detailed work makes this cathedral a true masterpiece. The main façade is heavily decorated and has a loggia consisting of the ... Open »
Modena
Grande Square located in the center of the city is a real masterpiece of the architectural art. The design of the square was developed by numerous medieval masters. Once upon a time mass events were conducted on the square, so the square was designed like a spacious amphitheater. The main decoration of the square is the statue of la Bonissima, which was opened in 1468. ... Open »

All about Imola, Italy - sightseeings, attractions, touristic spots, architecture, history, culture and cuisine. Prepare your trip together with OrangeSmile.com - find out the 'must see' things in Imola, which places to visit, which excursions to take, where the breathtaking views are waiting for you. Planning your trip with this travel guide will help your to get the most out of Imola in few days.