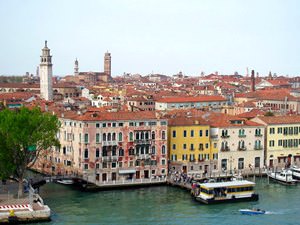 How can one of the most romantic cities in the world amaze even experienced travelers? Most probably, beautiful canals and rides in beautifully decorated gondolas are not enough. However, do not hurry to decline an opportunity to enjoy an exciting ride on Venice canals. There is a wonderful motor boat renting station on Canarreggio Street, building 331. The price of renting a private boat is nearly 30 euro per hour. Given that some boats are up for 6 people, the renting fee is not just attractive – it’s an incredibly generous offer. Naturally, all clients of the renting company need to prove they know how to ride a motor boat. There must be at least one “shipmaster” who can handle this task.
Top touristic routes around Venice: architectural sightseeing and landmarks
Discovering the architecture of Venice from bird's eye view! St Mark Basilica, San Giorgio Maggiore, La Fenice, San Zaccaria, Santa Maria Gloriosa dei Frari, San Moise, San Francesco della Vigna, all those monuments are defining the image of Venice …

Open
If you prefer walking to water-based activities, don’t forget to find the narrowest streets of Venice. Ramo Ca Zusto and Calle Varisco

are considered the leaders in this category. The width of the latter one is only 53 centimeters, so if you want to slip between tall old buildings, make sure no one is moving into your direction from the opposite side of the street. Otherwise, you might need to go back in the middle of your way – there’s not enough space for two people to pass each other on the narrowest street in Venice.
If you think that you’re well-aware of all important religious landmarks of Venice, you might be mistaken. Travelers keen on art will find it very interesting to visit the ancient church of San Fantin

. It’s incredibly interesting not only because of its old façade, but also because of an installation, Post-vs-Proto-Renaissance, exhibited there. The author of the installation is Oksana Mas, a famous modern artist. Post-vs-Proto-Renaissance consists of 13,000 wooden Easter eggs, each of which is hand painted. Copyright www.orangesmile.com
Cultural vacation in Venice - fantastic architecture and monuments
Santa Maria della Salute, San Pietro di Castello, Santa Maria Formosa, Santi Giovanni e Paolo, Gesuati, as well as many others, they all become the world's cultural heritage objects and remain as iconic monuments for Venice …

Open
The picturesque Burano quarter is a no less interesting place for walking. It is located on islands, so there has never been a single car there. You will not face endless tourists as well, so it’s possible to enjoy an unhurried walk along canals, observe boats of local people docked nearby, and admire charming small houses with facades painted in all colors of the rainbow. The most attentive travelers will find several homerun restaurants that offer excellent fish dishes at affordable rates. 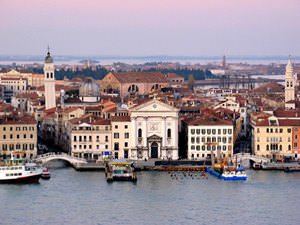 If you enjoy walking in unusual shops, don’t forget to visit Libreria Acqua Alta. The shop consists of several halls. Upon entering, it’s simple to understand why Libreria Acqua Alta is often called “the most beautiful bookstore in the world”. One can hardly find one more shop in the world that stores its goods in a giant gondola! As there are not enough gondolas to keep all books, in different halls books are carefully put into an old bathtub, on old armchairs and massive wooden tables. At a glance, it’s hard to understand that you’re in an ordinary bookstore. Libreria Acqua Alta is reminiscent of an antiquity store or a history museum.
Guide to Venice sightseeing - things to see and to visit
Venice is a city of canals and amazing architecture that keeps attracting visitors from all over the world. What could be more romantic than a gondola ride on a Venice canal? Venice remained …

Open
If you’re keen on mystical stories, don’t forget to visit the small and secluded island of Isola di San Servolo. Several hundred years ago, an asylum was open there. The mental health clinic was operating until 1978. According to the official data, many patients became victims of devastating experiments. Locals claim that ghosts of those patients still live in the old building of the asylum. Skeptical travelers can head there and prove that doubtful fact themselves.

This article about ideas on extraordinary weekend in Venice is protected by the copyright law. You can re-publish this content with mandatory attribution: direct and active hyperlink to www.orangesmile.com.
Venice - guide chapters 1 2 3 4 5 6 7 8 9 10 11 12 13 14 15 16 17

♥   Restaurant 'La Caravella' Venezia. Type - Venetian. 0.9 km from the center. On the map

Survived castles around Venice
♥   Castle 'Residenza Il Castello' Fivizzano, 1.1 km from the center. On the map

Art galleries in Venice and around
♥   Art museum 'Museo Fortuny' Venice, 0.6 km from the center. On the map

♥   Art museum 'Gallerie dell Accademia' Venice, 0.8 km from the center. On the map

♥   Art museum 'Peggy Guggenheim Collection' Venice, 0.9 km from the center. On the map

Distance from Venice center - 1.2 km.
Only seven cells were equipped in the prison. They were used for the detention of political prisoners. Also, prisoners who had a high social position were held here. It was in this prison that the world-famous adventurer Casanova served his sentence. He became one of the few prisoners who managed to escape from Piombi. Casanova described his time in prison and his escape in his memoirs later. Excursions are conducted through the ancient prisons today. Visitors to the Doge's Palace can see the preserved prison cells located under the roof. They will also have the opportunity to descend into the palace's dungeons. The prison was also located there in the medieval period. … Read further

Distance from Venice center - 1.2 km.
The legendary Danieli Hotel is also placed here. It was opened in 1822 and works at present. As earlier, it adores people with its marvelous interior. Celebrities like to visit this hotel. Further to historical hotels and outstanding restaurants there is a great number of souvenir shops. This place is very popular among tourists. There opens a great view on the architectural masterpieces, located on San Giorgio island. … Read further 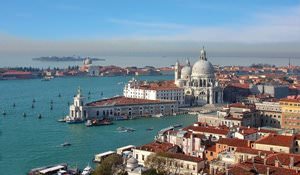 Distance from Venice center - 1 km.
Inside the cathedral is decorated with marvellous mosaics. The main religious artefact is reliquiae of Saint Marcus. Every day there comes to a lot of pilgrims from the whole world. Not far from the cathedral has placed another main architectural monument of Venice – the Palazzo Ducale. The Palace was built in Gothic style in the first half of the 15th century. Unfortunately, we don't know who was the architect of this wonderful building. The palace is a large architectural complex where was saved in an old prison. It is quite impossible to see all street corners and magnificent halls in a day. … Read further

Florence
If sampling delicious Tuscan wine is one of the main reasons for your visit in Florence, then it’s recommended to devote one day to getting acquainted with national meat delicacies. Head to Greve in Chianti, a town close to Florence, and find Antica Macelleria Falorni. This ancient butcher shop was open in 1729. For more than 300 years this shop has been famous for its ... Open »
Innsbruck
If you’ve been in Innsbruck before, you certainly know how local people admire sport. It’s so simple to become active and go in for sports in the city, and one of the ways to do that is to make an exciting bicycle ride together with a private guide and visit many interesting places. Such an entertainment is particularly recommended for travelers who don’t have much time ... Open »
Munich
In order to continue exploration of the beer related stuff, make a walk on Viktualienmarkt. This market is known as a place where it is possible to try the best sorts of the popular drink. There are several quality beer gardens in the territory of the old market. This is the right place to enjoy the inimitable atmosphere of the national heritage, look at locals and indulge ... Open »
Rome
On Sunday, don’t forget to visit the old Porta Portese market. This is an awesome place to buy excellent vintage souvenirs that will be a worthy alternative to traditional magnets and mugs. The flea market is a great place to shop old ceramics and interesting wooden artworks. Without a doubt, the market is a treasure for antiquity collectors. When shopping on Porta Portese, ... Open »
Vienna
If you have already visited Salvatorian Monastery on Habsburgergasse during one of your previous vacations in Vienna, don’t hesitate to do it once again. Several years ago, a new exciting entertainment opened there. Time Travel Vienna is a unique opportunity to make a real journey to the past. The ultra-modern 5D cinema offers immersive experiences for all visitors, who will ... Open »
Nurnberg
Those who prefer more traditional locations will be like walking through the central city streets. Here, each house can safely be called a unique attraction. If you look at facades, on each of them you can notice unusual carved balconies, old signs, skillful painting, and other decorations - each historic house keeps its secrets. Nuremberg's most popular attractions are ... Open »

Walk through hidden local streets, sneak to a small cafe, breathe and enjoy Venice from inside. Stay out from the beaten track during your city weekend, discover the soul of Venice as a real travel gourment. Follow our guide, take one of the exclusive services and spend your time in Venice unforgettably and with a full passion!