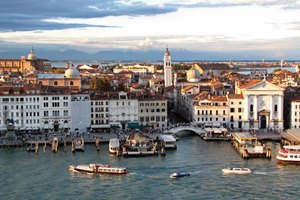 Every historic hotel in Venice has its own interesting history, and the prestigious Cipriani & Palazzo Vendramin is no exception. In 2011, this fabulous hotel on Giudecca Island became the leader of the prestigious Virtuoso rating, leaving behind as many as 950 competitors. The hotel is included in the list of the best hotels in the world, «Best of The Best», so there’s no wonder why so many celebrities choose it for their visit in Venice.
The opening of the hotel took place in 1958. The idea of building a luxurious hotel near San Marco Square belongs to Giuseppe Cipriani, the founder of the legendary Harry’s bar. In 1968, an important event happened in the hotel – a large, Olympic size swimming pool was opened there. Even nowadays, the swimming pool is a true gem of the Cipriani’s infrastructure. A part of the high-class guest rooms of the hotel is open in the famous Palazzo Vendramin – a unique palace that dates back to the 15th century. There are five more exclusive guest rooms that are open in another prominent historic building – small Palazzetto palace. Cipriani & Palazzo Vendramin offers three unique restaurants and three bars for its guests. Renato Piccolotto, a famous chef and talented student of Giuseppe Cipriani himself, manages one of the restaurants. Copyright www.orangesmile.com
Hotel Danieli Check on the map. From Venice center - 1.3 km
Hotel Danieli

is one of the oldest and most prestigious hotels in Venice. First guests appeared there yet in the 14th century. The unique palace, in which the original hotel was open, has been carefully restored. Later, new guest rooms appeared in the neighboring historic buildings that were constructed later. During its long history, the hotel greeted many famous guests. Luxuriously decorated guest rooms attracted Charles Dickens, Frederic Chopin and George Sand. Each of the palaces in the complex has its own miraculous story. The oldest building belonged to the noble Dandolo family. The 14th-century palace still has the carefully preserved apartment of the Doge. Without a doubt, that’s one of the most luxurious guest rooms in whole Venice.
Check the hotel prices and availability
Family holidays with kids in Venice. How to entertain your child, things to show to children.
Without a doubt, Gardaland remains the most famous and popular destination for families with children in Venice. It’s a large amusement park that is open not far from Garda Lake. …

hotel has a no less interesting history. The eye-catching historic building was constructed in the 15th century. It belonged to the noble patrician Pisani family. During the building of the palace, several older buildings remained in its territory, and that makes Gritti Palace an important historic landmark. Later, the palace belonged to even more famous Gritti family, so a collection of artworks and precious accessories was only growing each century.
The last extensive restoration of the palace took place more than 30 years ago. At that time, all antique furniture was carefully restored. Some guest rooms have the same design that is unchanged for many decades. There is a guest room in the ancient palace where Earnest Hemingway lived for quite a long time. This is the place where he worked over his novel Across the River and into the Trees. Fans of Peggy Guggenheim are also well-aware of Gritti Palace as she celebrated her 80th anniversary in one of the most luxurious guest rooms in the hotel in 1978.
Cuisine of Venice for gourmet with top restaurants and cafe
Restaurants in Venice deserve the highest praise. Each institution may please its guests by various specialties and friendly atmosphere. Harrys Bar is one of the most popular restaurants …

has a fantastic location – a beautiful 18th-century palace. Austrian entrepreneur Julius Grünwald and his wife were the first owners of the hotel. By the way, the wife was a daughter of Mr. Bauer who was the owner of the famous De la Ville hotel in the end of the 19th century. In 1930, Bauer Palazzo got a new owner – shipbuilder Arnaldo Bennati. Under his guidance, the hotel was fully restored. During that extensive renovation, which took almost 10 years, the building got a new modern unit. Despite the fact that nowadays the two buildings, which belong to different epochs, are two different hotels, they are still connected by a system of passages. Therefore, everyone is welcome to visit the historic building.

Search hotels in Venice for your taste

Famous hotels in the region of Venice

Verona
Travelers who prefer to stay in the catchiest designer hotels should pay attention to prestigious Byblos Art Hotel Villa Amista. Its present location is a wonderful 15th-century villa, the interiors of which were designed by Alessandro Mendini, one of the most outstanding designers of the 20th century. A riot of colors and their unexpected combinations, elegant soft furniture ... Open »
Florence
The legendary Hotel Savoy, which is located on Piazza della Repubblica, is famous far beyond the borders of Florence. The look of the high-class hotel is the result of work of famous architects and fashion designers of the country. Hotel Savoy is a great combination of best national traditions and modern charm. The popular hotel makes up a complex with the L'Incontro restaurant ... Open »
Innsbruck
Without a doubt, Grand Hotel Europa is the most famous and high-class hotel in Innsbruck. For many years, this hotel has been chosen by various celebrities, politicians, and other prominent personalities. Prince of Monaco, Queen Elizabeth II, the Rolling Stones, and Sting were among the guests of this hotel. The most prestigious hotel in Innsbruck features elegant décor in an ... Open »
Rome
The historic Westin Excelsior is a true legend of Rome. Ever since the opening in 1906, it has been acknowledged as the most prestigious hotel in the city. For more than a century, the hotel has been attracting numerous celebrities. The world’s richest people stayed at Westin Excelsior, so even nowadays many travelers and locals visit the prestigious Doney restaurant hoping ... Open »
Vienna
The luxurious Hotel Imperial is a true legend of Vienna. The history of this iconic hotel started yet in 1869. The magnificent palace was built as a residence for the Duke of Württemberg. Famous Austrian architect Arnold Zenetti worked over the project of the magnificent building. Four years after the building of the hotel, it was decided to turn it into a hotel. The reason ... Open »
Cologne
Excelsior Hotel Ernst is a hotel with the history of more than 130 years. This hotel has been operating since 1863, when the court restaurateur finished the building. Several years later, he sold the house to the Kracht family that has been taking care of the building since then. During its long history, the grand hotel has always attracted rich and famous guests. German Kaiser ... Open »
OrangeSmile.com - online travel reservation expert providing reliable car rental and hotel booking services. We feature more than 25.000 destinations with 12.000 rental offices and 200.000 hotels worldwide.
Secure Server