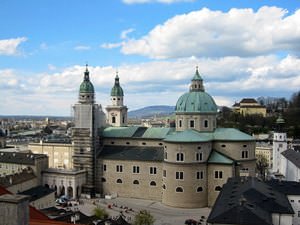 Salzburg Cathedral, Mirabell Palace, Kajetanerkirche, Salzburg Marionette Theatre, Pfarramt Mulln, and Leopoldskron Palace are the main candidates that compete for the title of the major architectural symbol of Salzburg. Just like in the first part of the guide, you can watch each monument by viewing its colorful 3D model in the Salzburg flyover video on the left. Don’t forget to access our photo gallery and an overview of interesting facts regarding every monument. The map of the most important architecture sights of Salzburg (located below this guide) will help you to create your own sightseeing tour through Salzburg. 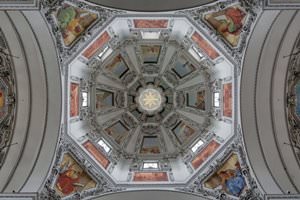 Facts:
» Salzburg Cathedral was built by archbishop Vergilius of Salzburg at the site of the first Christian church in 774.
»  For many centuries, the cathedral had been destroyed by fire many times: in 1167, 1312, 1598, and 1859. It was last destroyed during the bombing in 1944.
»  The cathedral was restored in 1959. On the gate, there is a plate with three dates of cathedral sanctification: 774, 1628, and 1959.
»  In the cathedral, there are 11 altars and 5 organs. 10 000 people can attend services at the same time. The bells in the bell tower were cast in the 16th-17th centuries. The portal is decorated with statues of Vergilius and Rupert, bishops who lived here and were patrons of Salzburg in the 8th century.
»  In 1756, Wolfgang Mozart was baptized in a medieval font cast in 1321. When Mozart grew up, he worked here as an organist.
»  There is also the shrine of archbishops of Salzburg. 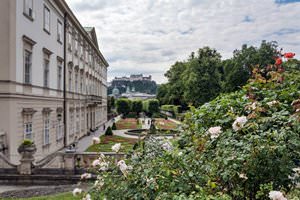 Facts:
» Mirabell Palace is the most admirable place in Salzburg. It was built in 1606.
»  One legend says that the palace was given to Salome Alt from Archbishop Wolf Raitenau. They could not marry but this did not prevent them from having 15 children.
»  The palace was rebuilt many times. After the fire in 1818, only the Marble Hall and the marble staircase have been preserved. The palace has become more modest.
»  The main attraction of the Mirabell Palace is its gardens that are the next best thing to the Gardens of Versailles. In the center of the park, there is a fountain surrounded by sculptures of Ancient Greek gods. These statues have been preserved since 1690.
»  In the park, there is also the Garden of Dwarfs where you can see 28 small funny sculptures of these citizens.
»  The most beautiful place in the palace is the Marble Hall. Wolfgang Amadeus Mozart performed here once.
»  Nowadays, wedding ceremonies are held here. It is the best wedding hall in Austria. The Mirabell Palace and Park are under the protection of UNESCO. 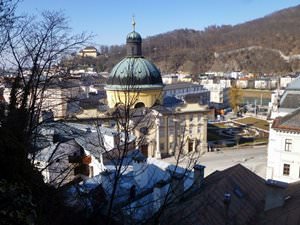 Facts:
» In 1685, the first stone was laid into the foundation of the church in commemoration of Catholic Saint Cajetan, a patron of pregnant women. To separate it from “cheap” Protestant churches, Cajetan Church was decorated with frescoes, gilt, and sculptures.
»  The small construction is crowned by a dome-drum. The central entrance is supported by Ionic columns. They rest on a special elevation. The roof seems to be almost weightless and airy.
»  The inner walls were finished in the first half of the 18th century. Some decorative elements, including moldings, were added later.
»  The organ was placed in Cajetan Church in 1700. There is an old staircase that consists of 49 steps. It is aged over 300 years.
»  The inner vault was painted by an Australian artist. The picture depicts the victory of St. Cajetan. The main altar is covered with a beautiful canopy with statues of angels. Side altars are dedicated to patrons of the church.
»  One of the constructions is dedicated to St. Ann, the mother of the Virgin Mary. In 1150, there was a medieval chapel built after St. Ann.

Facts: » The Salzburg Marionette Theatre was founded by professor and sculptor Anton Aicher. The sculptor constructed dolls that can repeat natural human movements.
»  The theatre opened in 1913 with the premiere of Mozart’s opera Bastien und Bastienne. 14 performances – which were Mozart's operas – were staged during the year.
»  Anton Aicher managed the theatre until 1926, when he appointed his son, Hermann Aicher, to the post. Hermann began using the latest lighting technology to enhance the visual effect of the stage. He also invited teachers and students from Mozarteum to participate in the creation and performance of music pieces.
»  In 1927, the marionette theatre started to tour different countries. The theatre still goes on tours and is very popular all over the world.
»  Its repertoire includes operas and operettas, ballet performances, and other drama productions. Thus, both children and adults happily attend this enchanting colourful theatrical spectacle.

Facts: » Pfarramt Mulln was first mentioned in 1148. It is located in the district that was distinguished by lots of water mills. This is why the church is called like this.
»  In 1439, the exterior of the small church changed and was designed in the Gothic style.
»  In 1674, a pointed bell tower was added to the church.
»  Inside, there is an altar lined with red marble. In the center of the altar, there is the statue of the Holy Virgin Mary with a baby. The statue was made in 1453. It is considered to be miraculous.
»  There is a massive staircase. Over it, you can see old paintings of the 17th century.
»  Near the church, there is also a small cemetery that was founded in 1453.

Facts: » The Leopoldskron Palace was built in 1736 for the family of Archbishop Leopold Anton Eleutherius von Firmian. The archbishop asked his relatives for burying his heart in the chapel of the palace. When he died in 1744, his will was fulfilled. The body of the archbishop was buried in Salzburg Cathedral.
»  The palace was rebuilt in 1763 when the tower was dismantled and the third level and the roof were reconstructed.
»  In the 19th century, owners of the palace changed many times. In 1918, it was bought by famous European impresario Max Reinhardt. He had restored and refurbished the building for 20 years. Here, composers, writers, and actors from all over Europe met and theatrical performances were staged.
»  Nowadays, the palace belongs to heirs of Reinhardt and is in private ownership.
»  In the palace, the Salzburg Global Seminar organizes its seminars. At such seminars, issues on overcoming political, cultural, ethnic and geographical inequalities are discussed. Independent experts are also invited.

This guide to architecture monuments in Salzburg is protected by the copyright law. You can re-publish this content with mandatory attribution: direct and active hyperlink to www.orangesmile.com.
Salzburg - guide chapters 1 2 3 4 5 6 7 8 9 10 11 12 13 14 15 16

Plan your own tour over Salzburg on the monuments map

Search for architecture monuments of Salzburg on the map

Tours through neighbours of Salzburg

Munich
The New Town Hall is the building in the northern part of Marienplatz designed for the city authorities, including Lord Mayor, City Council and city government. The building of the New Town Hall has been built in 1867-1908 years. It was repeatedly reinforced and expanded. Today the New Town Hall is a building in the neo-Gothic style constructed of brick and stone. Facade of the building is decorated with figures of the Bavarian dukes, kings of ... Open »
Innsbruck
The church has unique religious objects preserved. There is a work by a German Renaissance painter – Madonna and Child. The icon is called Maria Hilf and is located in the centre of the altar. The carved frame is gilded. There’s a tomb of Maximilian III, an archduke from the Austrian dynasty (1620). There is an organ in the room. Its shining tubes stand out against a dark blue background. The organ is dressed in a wooden case. Columns ... Open »
Nurnberg
St. Lawrence’s Church stands on the foundation of ancient St. Lawrence’s Chapel. It dates back to 1235. In 1350, the construction of a full-fledged church began. It was during these years that an openwork stone rosette with a diameter of 10 metres was created on the facade between the two towers. Later, people started to call it St. Lawrence’s star. The towers of the temple often caused fires started by lightning that struck ... Open »
Vienna
The Rathaus serves as the seat for both mayor and city council of Vienna. The town hall made in the Gothic Revival style was built in the late 19th century. The main hall of the Rathaus is of great interest for tourists, as its length reaches 71 m. This room is decorated with sculptures of famous Viennese. The hall is often used for exhibitions, concerts and balls. In total, the Rathaus hosts about 800 events per year. The central tower of ... Open »
Venice
St Mark Basilica is the cathedral of the Roman Catholic Archdiocese of Venice. That’s most famous of the churches of the city and one of the best known examples of Byzantine architecture in Western Europe. Since the 9th century, the basilica was known as the Golden Church and was the symbol of Venetian wealth. It owed its second name to luxurious furnishings and golden mosaics. The cathedral has a free-standing bell tower of about 100 meters ... Open »
OrangeSmile.com - online travel reservation expert providing reliable car rental and hotel booking services. We feature more than 25.000 destinations with 12.000 rental offices and 200.000 hotels worldwide.
Secure Server