Detailed hi-res maps of Ulm for download or print 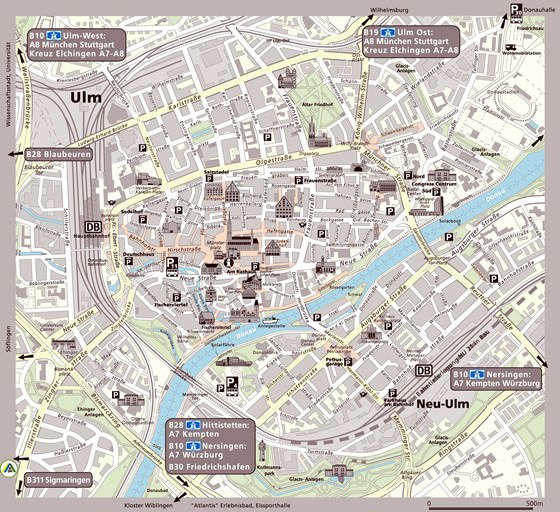 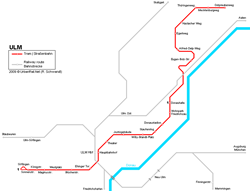 Search for services, infrastructure and sights on map of Ulm

Our guide chapters over Ulm

Fans of Italian cuisine would find a place to dine easily. The leader in this culinary tradition is the Da Franco restaurant. Decorated in a contemporary style, it is very popular not only among tourists, but also locals. The main distinguishing feature of the restaurant is authentic Italian cuisine as it is. Among international restaurants Einstein deserves special attention. Despite the fact that its price level … Open

Traditions and mentality of Ulm

The most interesting festive event is the Oath Week (Schwörwoche). This historic holiday recalls events of 1397, when an oath agreement was kept between imperial officials and patricians. It is celebrated in July; it includes a lot of enchanting events. The Lichterserenade light show informs about the beginning of the celebration; it is followed by a series of interesting tournaments and competitions, concerts and … Open

We should also mention the preserved building of the old Mint. It was erected in the middle of the 16th century. They used wood as the main building material. Only later some parts of the building were reinforced with bricks. Today, the old mint is open for public visits. In the vicinity of the city, is located an old Wiblingen Monastery. It was founded at the end of the 11th century. The monastery had been fully … Open

3. The warmest months of the year are July and August; at this time the average daily temperature is about 23 degrees Celsius. Winters in Ulm are also quite warm and soft, even in January the temperature rarely drops below -2C. 4. Excursions fans are recommended to travel around the city on foot as interesting historical buildings and cultural institutions are located here at every step. 5. A popular form of … Open

No less attractive is a fishermen district (Fischerviertel). This is where the legendary House of Oaths (Schwörhaus), as well as Staufenmauer is situated. Alte Münz is considered one of the most beautiful attractions of the area. At every step you can discover interesting buildings of past centuries, including both common and unique, such as Schiefes Haus falling house. The Sebastiankapelle located there was … Open

Wilhelmsburg Fortress is another important attraction of this city. It was built in the 19th century. This is the most massive construction, which was built in the 19th century. For many years the castle has been used as an important defensive point, which has saved the lives of thousands of citizens during the times of the Second World War. Kunstpfad Park of Arts is a truly unique project. The park was created … Open