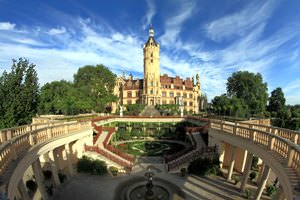 This quiet and cozy city will enchant travelers preferring to devote their time to strolls along scenic places. More than five hundred years it has remained the residence of Mecklenburg -Schwerin Dukes and the capital of the duchy of the same name. Historical monuments of different eras have preserved in Schwerin.
Authentic traditions, festivals and lifestyle of Schwerin inhabitants
Schwerin is the amazing city with inexpressible atmosphere and interesting cultural traditions that locals cherish and hand down from generation to generation. Schwerin is often called the …

Open
Schweriner Schloss has been the permanent symbol of the city for more than a century and a half; it has been built in the mid19th century under direction of prominent architects. The castle is a unique combination of different architectural styles, including Baroque and Gothic, Byzantine and Renaissance. Currently, the part of the beautiful and historic building is used by Parliament; other parts house the fabulously beautiful conservatory and the museum.
Among other prominent architectural landmarks 1, Meklenburgshtrasse, old stables and the Town Hall are worth noting. Another important noteworthy object is located close to the Pfaffentayhs Lake. It is a monument to Heinrich Schliemann, the discoverer of Troy; every local resident knows about his legendary deeds. Copyright www.orangesmile.com
Advices to travellers: what you should know while being in Schwerin
1. Tourists visiting Schwerin for the first time and planning a rich program of excursions should definitely look into the tourist office. It is located at the Am Markt square; it offers a …

Open
An old grinding mill, Schleifmuhle, built in the 18th century has preserved in Schwerin; these days it continues to work. In the period from April to November, the mill is open to public, so anyone can watch grinding of massive granite stones. The city has gardens, parks and lakes; Der Schlossgarten can be called the most beautiful of them. It is located to south of the castle; Alter Garten is also very amazing. 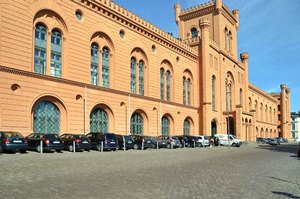 Among religious sites of interest, Schweriner Dom is notable. Its construction has begun in the 13th century and lasted more than 150 years; the cathedral is a permanent venue for organ recitals. Schwerin is famous for its amazing museums, including the Schlossmuseum, the Staatliches Museum Schwerin and the Technisches Landesmuseum Schwerin. The Freilichtmuseum Schwerin-Mueß represents an interesting exposition; unique findings of scientists are stored at the Archäologisches Landesmuseum Mecklenburg-Vorpommern.

In the section below, you can get one of our excursion, activities or city discovery tours over Schwerin and surroundings. Our website offers 10-30% lower ticket prices, when compared to the offline purchase on the spot.

This guide to cultural sights Schwerin is protected by the copyright law. You can re-publish this content with mandatory attribution: direct and active hyperlink to www.orangesmile.com.
Schwerin - guide chapters 1 2 3 4 5
Reference information
Map of all palaces

Public palaces near Schwerin
♥   Palace 'Schloss Schwerin' , 0.3 km from the center. On the map

Art galleries in Schwerin and around
♥   Art museum 'Staatliches Museum' Schwerin, 0.2 km from the center. On the map

Cathedrals and basilicas near Schwerin
♥   Marienkirche, Wismar, 29.6 km from the center. On the map

♥   Domkirche St. Johannes der Täufer, Oldenburg in Holstein, 81.8 km from the center. On the map

A lot of attractions can be seen in Hamburg, the second largest city in Germany. This ancient city has preserved medieval buildings. You can find houses built in the 17th century on its streets like Raimerstvite and Deichstrasse. The main attraction is the city center. It boasts the neo-Renaissance Town Hall of the 19th century, the neo-Gothic church of St. Nicholas, which is 147 meters high, and the monument to Bismarck. There are about 60 museums, one of the most famous is the art museum Hamburg Kunsthalle with a total exhibition area of ​​13 thousand square meters. It exhibits mainly art pieces dating back to 19th century. Another museum, dedicated to Ernst Barlach, contains an extensive collection of sculptures and drawings of this sculptor and writer. In Hamburg, the first opera house in Germany, the German National Theater, is located. Not long ago, the Elbe Philharmonic was opened too. … Open 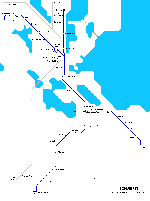 Photogallery of cultural heritage of Schwerin

Excursions over cultural sights of neighbours of Schwerin

Lubeck
After savoring the impressive look of the ancient gateway the tourists can visit the Historical Museum set in close vicinity to the landmark. Its vast collection numbers in the thousands of priceless showpieces among which one will find ancient arms, domestic objects, historical documents and art objects. In the heart of the historical part of Lübeck one will find the Town ... Open »
Rostock
Rostock guests are recommended to visit the Max Planck Institute for Demographic Research. The institute is housed in a majestic medieval palace. The institute is one of the largest research centers in Europe and is globally known for its advances in this scientific domain. The institute sides with scenic park area being a perfect place for hiking in serene nature. ... Open »
Hamburg
Petrikirche is one of the oldest buildings in the city. The first chapel on the site of the modern cathedral was built yet in the 11th century. Two centuries later it was decided to rebuild the chapel and turn it into a massive church. The beautiful gothic building has survived till these days in almost original state. Its interior is still decorated with artful murals created ... Open »
Kiel
The most notable region in the historical perspective is the region of Laboe; the World War II submarine is the main object of interest here. Not far from the iconic place where submarine rests, a beautiful memorial was found. The Kiel Canal, opened in the late 19th century, remains the undisputable symbol of the city. The length of the canal is 99 kilometers; every year it ... Open »
Wolfsburg
Porschestraße is considered the main city street, which is perfect for walking. Along it, there are numerous shops and lots of interesting modern architectural monuments. The city is also famous for its natural attractions - there are more than thirty lakes and rivers alone within its limits. Guests of the city must see the Mittelland Canal, along which the famous automobile ... Open »
Celle
The vast majority of interesting historical buildings (about five hundreds) is concentrated in the Old City. The bulk of the buildings of the area date back to the 16th - 18th centuries; it is noteworthy that during the Second World War, the territory of Celle was practically undamaged. That’s why there are hundreds of old buildings there. The most important attraction is ... Open »

Culture guide to Schwerin. Which fascinating sights to visit once you are in Schwerin: temples, churches, museums, theaters and castles. Recommendations (with addresses, phone numbers and links) on the places 'must visit' in Schwerin. Plan your own city excursion by using this page info!