«« BEGINNING - PART I
Video of flights over top monuments of Naples in HD format.
Use 'Full Screen' mode.
Let’s continue our virtual walk in Naples and its most prominent architecture monuments. This time, we will focus on such breath-taking sights as Royal Palace, Santa Chiara, Museo di Capodimonte, Castel Sant. Elmo, Galleria Umberto I and many others. For many people, the cultural and historical vibe of these monuments defines the atmosphere of not only Naples, but also Italy in general. We will make a virtual 3D tour to every monument, look at it from a bird’s eye view, and browse the most interesting facts that have defined the history of Naples. The photo gallery and maps are the cherry on the cake! 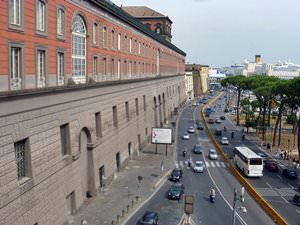 Facts:
» The Royal Palace in Naples is the main residence of Bourbon monarchs of the Kingdom of the Two Sicilies. It is built around Piazza del Plebiscito.
»  In front of the western facade of the palace, there are statues of the greatest rulers in the history of the Kingdom. On the sides of garden gates, there are statues of horses from the Anichkov Bridge in Saint Petersburg.
»  Nowadays, there are different offices in the palace. Since 1814, the main part of the building has been occupied by the National Library that houses thousands of books and the unique collection of papyri from Herculaneum.
»  In the building, there is the Museum of Royal Palace Apartments that occupies the rooms of the Central Hall, the Throne Hall, the Hercules Hall, and other rooms.
»  In the Royal Palace, you can see works of such masters, as Titian, Guercino, Andrea Vaccaro, Mattia Preti, Spagnoletto, Massimo Stanzione, and Luca Giordano. 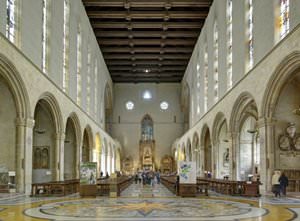 Facts:
» Santa Chiara is a religious complex that consists of a monastery, tombs, and an archeology museum.
»  The monastery was built in a baroque style by King Robert the Wise in 1310-1340. Originally, it was an Anjou kings’ shrine.
»  There is a bell tower near the building. The construction began in 1328 and completed only in the Renaissance period.
»  In the church, the indoor gallery, columns, and benches are decorated with majolica that depicts the scenes from Napali history, such as carnivals, voyages, and hunting.
»  One legend says that those couples which get married in this church will have happy life without troubles, poverty, and distrust. So, the church is very popular with young men and women from Naples. 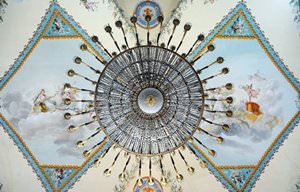 Facts:
» Museo di Capodimonte is an art museum located in the former palace and summer residence of the Bourbons, in the territory of the Capodimonte Park.
»  The palace was built upon the order of Charles VII, the king of Naples and Sicily.
»  The collection of the museum mostly includes paintings of Italian artists of the Renaissance era.
»  In the museum, you can see canvasses of Farnese and Borgia, tapestries of the Avalos, china of Maria Amalia of Saxony.
»  Some canvasses displayed in the museum have been transferred from historical temples of Naples (San Domenico Maggiore, San Lorenzo Maggiore, etc.) in the hope of finding safer and more optimal storage conditions.
»  The most precious exhibits of the museum are paintings of European (mostly Italian) artists of the Late Middle Ages and the Renaissance period. Here, you can see works of such artists, as Masaccio, Botticelli, Tiziano, Raphael, Luca Giordano, etc. 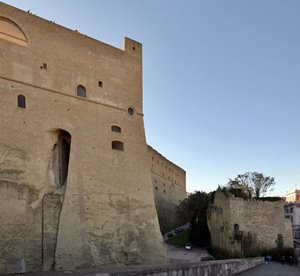 Facts:
» Castel Sant’Elmo is a medieval fortress located on the Vomero hill.
»  The fortress started to be built in 1329 when King Robert of Anjou ruled. The construction was completed in 1343, in the year of the king’s death.
»  The fortress is very interesting in terms of architecture, as this is a star-shaped construction with six fortifications.
»  In 1799, Sant’Elmo was also a symbol of the Neapolitan Republic.
»  Today, there is the Art History Museum in the fortress. It is a popular tourist place. 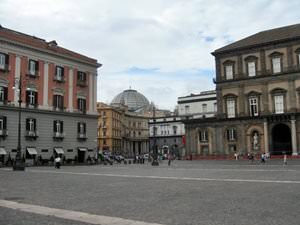 Facts:
» Today, the Galleria Umberto I is a shopping mall that has an architectural and historical value. Every year, this place attracts a lot of tourists with amazing architecture and luxury interior.
»  The base of the architectural ensemble of the Gallery is neoclassical features, due to which the Gallery would resemble the famous Galleria Vittorio. Later, the facade gained features of Neo-Renaissance.
»  The building was named after King Umberto I who in 1887 ordered to build the wonderful building in a district that was famous for its bad reputation and was devastated by cholera.
»  In the Galleria Umberto I, there are shops, restaurants, and cafes visited by local people and tourists. In long halls, classical music concerts are held sometimes.
»  In the round hall, the floor is decorated with a pattern depicting zodiac signs. Many tourists want to stand, sit or lie on their sign because they think that this can bring them good luck. 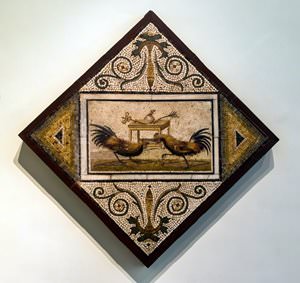 Facts:
» The National Archaeological Museum in Naples houses the huge collection of archaeological artifacts found in Pompei, Herculaneum, Stabiae, and other nearby regions.
»  The museum collection includes well-preserved pieces of art created in the period of Ancient Greece, Ancient Rome, and Renaissance. It is the most important Italian archaeological museum.
»  The museum also houses the rich collection of Egyptian artifacts found in different ancient cities that were destroyed by a volcanic eruption.
»  Here, you can see a world-famous mosaic “The Fight between Alexander the Great and Darius”.
»  Six rooms of the museum house the complete collection of the Farnese dynasty. This collection includes 200 000 exhibits: medieval and antique coins, sculptures of bronze and marble, gladiators’ weapons, ancient Greek statues, etc.

This guide to architecture monuments in Naples is protected by the copyright law. You can re-publish this content with mandatory attribution: direct and active hyperlink to www.orangesmile.com.
Naples - guide chapters 1 2 3 4 5 6 7 8 9 10 11

Plan your own tour over Naples on the monuments map

Search for architecture monuments of Naples on the map

Tours through neighbours of Naples

Rome
The Colosseum was the largest amphitheater in the entire ancient world. It could receive as many as 50,000 people. Originally, it consisted of four floors; the first three had wide arched entrances, while the fourth had rectangular doorways. From historical sources it’s known that grand gladiatorial games were held at the opening of the Colosseum. About 5,000 wild animals were released in one day. Roman Coliseum is depicted on 5-eurocent ... Open »
Palermo
The relics of Saint Rosalia rest in the cathedral church. She is considered as its intercessor. Tombs of the nobles who contributed much to the development of the Kingdom of Sicily have been preserved in honor of them. At the beginning of the 12th century, the first ruler was crowned in the Church of the Assumption of the Virgin Mary. The construction resembles a castle. The House of God differs from the mundane one with its bell tower and ... Open »
Florence
Santa Maria del Fiore means ‘the flower of St. Mary.’ The Cathedral is the most important in Florence and one of the largest churches in Italy. The Florence Cathedral is included in the UNESCO World Heritage List. At least six architects were employed in the development of the project and construction. A number of famous painters and sculptors, including Michelangelo, worked hard to decorate the Florence Cathedral. One of the most ... Open »
Sarajevo
The Cathedral of the Nativity of the Blessed Virgin Mary was constructed in 1863 on the petition of the Orthodox Community that asked the government of the Ottoman Empire for building the House of God. The sultan donated 556 gold coins to the construction of the temple. Merchants of Sarajevo paid the missing amount. The Russian Government gifted church utensils, theological books, robes for churchmen, and icons. The best artists were ... Open »
Venice
St Mark Basilica is the cathedral of the Roman Catholic Archdiocese of Venice. That’s most famous of the churches of the city and one of the best known examples of Byzantine architecture in Western Europe. Since the 9th century, the basilica was known as the Golden Church and was the symbol of Venetian wealth. It owed its second name to luxurious furnishings and golden mosaics. The cathedral has a free-standing bell tower of about 100 meters ... Open »
OrangeSmile.com - online travel reservation expert providing reliable car rental and hotel booking services. We feature more than 25.000 destinations with 12.000 rental offices and 200.000 hotels worldwide.
Secure Server