«« BEGINNING - PART I
Video of flights over top monuments of Rome in HD format.
Use 'Full Screen' mode.
Let’s continue our virtual walk in Rome and its most prominent architecture monuments. This time, we will focus on such breath-taking sights as Pantheon, Sant Agnese in Agone, St. John Lateran Basilica, Santa Maria Maggiore, Galleria Borghese and many others. For many people, the cultural and historical vibe of these monuments defines the atmosphere of not only Rome, but also Italy in general. We will make a virtual 3D tour to every monument, look at it from a bird’s eye view, and browse the most interesting facts that have defined the history of Rome. The photo gallery and maps are the cherry on the cake! 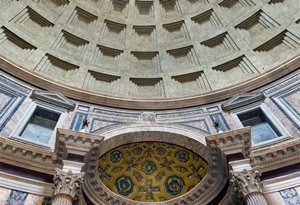 Facts:
» The location of the Pantheon wasn’t chosen by chance. According to the legend, this is where the founder of the city, Romulus, was raised after the death by eagles and carried away into the heavens to all the gods.
» The name of the monument comes from a pair of Greek words that mean ‘all divine.’
» In the 80 AD The Pantheon has been rebuilt after Domitian fire. Then, 30 years later, the church building caught fire again as a result of a lightning strike.
» The main feature of the Pantheon is Oculus sky window, the hole of 9 meters in diameter, which is the only window of the temple. 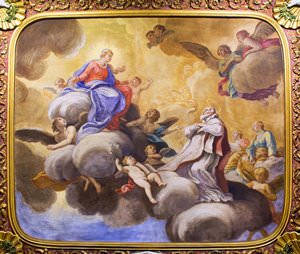 Facts:
» Sant Agnese in Agone is the church built in honor of an early Christian martyr, St. Agnes of Rome.
» According to the legend, 13-year-old Christian woman was naked put at the arena of the stadium before a crowd of pagans. There was a miracle, when suddenly grown hair covered the future saint from head to toe.
» The crypt of the church contains the most valuable Christian relic, the head of Saint Agnes.
» The temple played the role of the court church, because it was near the palace of Pamphili family that gave birth to the Pope Innocent X. Above the entrance, lie the remains of Pope Innocent X.
» The church has a form a Greek cross, in which each segment is interconnected. This is due to the location, sandwiched by Piazza Navona and the street behind the church. 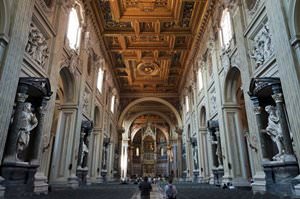 Facts:
» This is the first church in Rome and one of the oldest Christian churches.
» In the Catholic hierarchy, this church stands above all other temples in the world, and that’s affirmed with inscription over the entrance – ‘The Most Holy Lateran Church, Mother and head of all the churches of the City and the world.’
»  The main temple preserves the Holy Steps, a ladder, brought by St. Helen from Jerusalem. According to church tradition, it was the ladder that Christ used to ascend to the tribunal, which preceded the crucifixion.
» The robe of the Basilica of the Virgin and the sponge with traces of blood, of which, according to legend, Jesus Christ drunk vinegar at the crucifixion, are among local relics.
» In antiquity, there was the estate of a noble family of the Lateran on the site of the Basilica.
» The temple was decorated with precious gifts of emperors, thus it got the name Golden Basilica; all of them were lost in the sack of Rome by vandals in the 5th century. 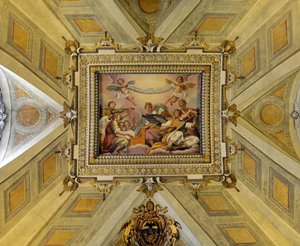 Facts:
» This is the main cathedral of all, dedicated to the Virgin Mary, and the fourth of the largest cathedrals in Rome.
» The cathedral has retained its original form and is the only cathedral of its type.
» The interesting legend is associated with foundation of Santa Maria Maggiore. Once, in the summer night, Madonna appeared to Pope Liberius and rich Roman Giovanni Patrizio in a dream. She ordered them to build the church at the place, where snow would fall the next day. The next morning the site, where now stands the basilica, was covered with snow.
» Main relics of the church are the image of the Virgin Mary and the silver shrine of the sacred manger, where Son of God was placed after birth.
» Under a triumphal arch stands a large canopy, behind which there is the main altar including the sarcophagus, in which the relics of St. Matthew are kept. 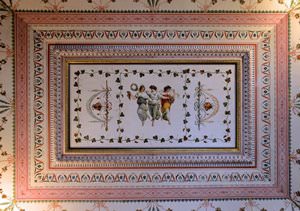 Facts:
» Galleria Borghese is the artistic collection of the princely Borghese family.
» There is a vast and unique collection of the most famous paintings of Dutch, Flemish, French, German and Spanish masters.
» Cardinal Scipione Borghese began collecting the collection of fine arts. According to rumors, some of the paintings were stolen from churches under his orders.
» The gallery is surrounded by the very amazing park with sculptures of world-famous artists. There is a statue dedicated to Pushkin in the park.
» Romans called this palace ‘the harpsichord’ because of its shape.

Temple of Antoninus and Faustina, Rome 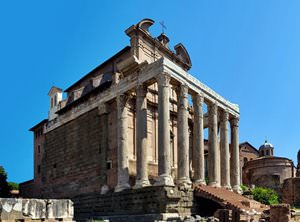 Facts:
» The Temple of Antoninus and Faustina is the shrine that Antoninus Pius has built in memory of his young wife Faustina.
» Gossip accused her of immorality, but the Emperor adored his wife so much that he said, "I would prefer to live in the desert, but with Faustina, than to live in the palace, but without her."
»  After his death the emperor was unanimously recognized as a god, and the church received a double name, of Antoninus and Faustina.
» During the Middle Ages, the temple was rebuilt in the church of St. Lawrence, who was burned alive on the grid here.
» Only a staircase leading to a high podium and altar used for animal sacrifice has survived there.
» You can see the jagged grooves at high columns; those are traces of ropes, which were used to topple the props, but didn’t succeed.

Plan your own tour over Rome on the monuments map

Search for architecture monuments of Rome on the map

Tours through neighbours of Rome

Napoli
San Francesco di Paola is the most significant church built in a neoclassical style in Naples. The basilica was constructed upon the order of King Ferdinand I in 1815 to honour St. Francis who, as the king thought, helped him return the land occupied by the French. The architect of the basilica was inspired by the famous Roman Pantheon, so he built it in the style of a rotunda and decorated it with a 53-meter dome. The main treasure of the ... Open »
Florence
Santa Maria del Fiore means ‘the flower of St. Mary.’ The Cathedral is the most important in Florence and one of the largest churches in Italy. The Florence Cathedral is included in the UNESCO World Heritage List. At least six architects were employed in the development of the project and construction. A number of famous painters and sculptors, including Michelangelo, worked hard to decorate the Florence Cathedral. One of the most ... Open »
Venice
St Mark Basilica is the cathedral of the Roman Catholic Archdiocese of Venice. That’s most famous of the churches of the city and one of the best known examples of Byzantine architecture in Western Europe. Since the 9th century, the basilica was known as the Golden Church and was the symbol of Venetian wealth. It owed its second name to luxurious furnishings and golden mosaics. The cathedral has a free-standing bell tower of about 100 meters ... Open »
Palermo
The relics of Saint Rosalia rest in the cathedral church. She is considered as its intercessor. Tombs of the nobles who contributed much to the development of the Kingdom of Sicily have been preserved in honor of them. At the beginning of the 12th century, the first ruler was crowned in the Church of the Assumption of the Virgin Mary. The construction resembles a castle. The House of God differs from the mundane one with its bell tower and ... Open »
Nice
Sainte-Reparate Cathedral was built in 1699 in honor of the patroness of Nice. According to the legend, young Reparata from Palestine professed Christian faith and died in agony for this when she was 12 years old. Angels brought a boat with the young saint to Nice, to the shore of the Angel Bay that was named after this event. The cathedral is located in an old part of the city. It is a typical construction built in baroque style. The ... Open »
OrangeSmile.com - online travel reservation expert providing reliable car rental and hotel booking services. We feature more than 25.000 destinations with 12.000 rental offices and 200.000 hotels worldwide.
Secure Server