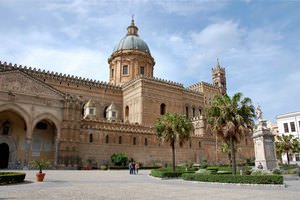 Any guide of Palermo would be incomplete without a review of its most impressive architecture monuments - Palermo Cathedral, San Giuseppe dei Teatini, Villa Giulia, Catacombe dei Cappuccini, La Martorana and many others. It’s difficult to overestimate their historical and cultural importance for Italy. The style and architecture of any of these landmarks are worth a visit when you are on vacation in Palermo. However, you can virtually visit any of these wonderful monuments without leaving your comfortable chair. For that purpose, simply 'fly' over the 3D model of Palermo that was created by OrangeSmile and GoogleEarth. All you need to do is to click the video on this page. 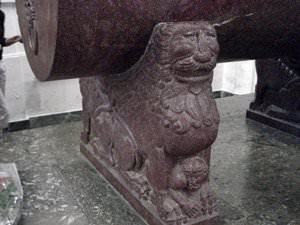 Facts:
» The relics of Saint Rosalia rest in the cathedral church. She is considered as its intercessor.
»  Tombs of the nobles who contributed much to the development of the Kingdom of Sicily have been preserved in honor of them. At the beginning of the 12th century, the first ruler was crowned in the Church of the Assumption of the Virgin Mary.
»  The construction resembles a castle. The House of God differs from the mundane one with its bell tower and dome. It is distinguished by the combination of different architectural styles. They will let you trace the complicated history of the country. The temple had been built for a very long time (12th-18th centuries).
»  There are a lot of marble statues inside. The most famous one is the statue of the Palermo patroness. In the altar zone, there are a lot of frescoes dating back to the 18th-19th centuries and a mosaic throne (the 12th century). Treasures, such as silver tableware and precious items, are kept in the special place.
»  On the floor of the main hall, you can see a meridian with zodiac signs on it. At 12 o’clock, the sunbeam hits one of the signs, in which the Sun has been throughout the day, through the hole in the dome. The heliometer was placed here in 1690.
»  With the permission of the bishop, Italian astronomer Piazzi made his observations in the cathedral. 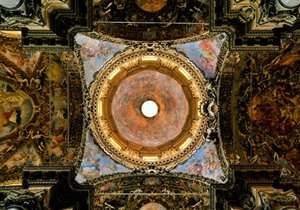 Facts:
» City constructions of the 17th century were located in winding streets. Upon the order of the ruler, the straight street was built. It crossed the octagonal space. The fifth corner was occupied by the church. It was distinguished by an arched and bright dome. It was made of blue and yellow ceramics.
»  Originally, the House of God was kept by carpenters’ workshops. The emblem (the axe with a crown) and the wooden statue of Saint Joseph have been preserved. The top of the statue is covered with a thin metal gilded sheet.
»  In 1603, the temple came to the Order of Theatines. The legend says that they needed the underground under the building. The reconstruction of Chiesa di San Giuseppe dei Teatini lasted 30 years.
»  The monumentality of the church really impresses. Entrance doors are marked by two rows of columns. There is a niche near them. It is decorated with colorful ornaments and angels. In the alcove, there is the statue of one of the founders of the Order of Theatines.
»  The floor inside is marble. The walls are decorated with frescoes.
»  San Giuseppe dei Teatini is famous for its hidden crypt. It has been preserved since ancient times. There is also the source of the healing water in the underground tomb. 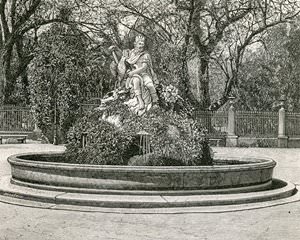 Facts:
» The local Justice of the Peace initiated the creation of the botanical garden in 1777. The construction was completed in 90 years.
»  The parking area is named after the soulmate of the King, Giulia d'Avalos.
»  This was the first park opened for everyone.
»  You can enter the Villa Giulia through the arched gate with a porch. There are columns on it.
»  There is a dodecahedral fountain in the center of the garden. It resembles a clock with its shape. Each marble item is a sundial. Atlas holds the clock on his shoulders.
»  In the Villa Giulia, there are a lot of metal statues, fountains, sculptors created by masters of the 18th-19th centuries, pavilions, and ponds. Hollow niches in the shape of an amphitheater will also attract attention. Musical and theatrical performances are often held here.
»  On the edges of paths and orange and lemon alleys, there are busts of historical figures who contributed much to Palermo.
»  Vegetation impress with its diversity. You can see pyramidal cypresses, evergreen fici, slim palms, and other species of Mediterranean flora.
»  Goethe visited it in 1787. He was delighted by the garden art in the park. 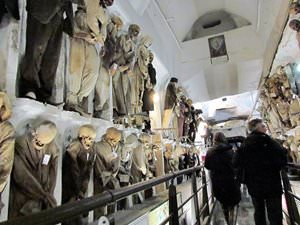 Facts:
» Capuchin monks have settled in the city since the middle of the 16th century. They buried the dead in the church crypt. Over time, there were not enough burial sites here. They had to dig a tunnel and create a space for other deceased.
»  Now, there are over 8 000 people in the catacombs. In the labyrinth with multiple ways, you can see standing, sitting, and lying mummies on the sides. Some remains cannot be seen because they are placed in plain and colorful coffins in the wall niches.
»  Depending on the caste, each of the deceased was buried in a particular aisle: for ordinary citizens, the Order members, and people of art.
»  The nobles noted in their testaments that their outfits must be regularly changed.
»  There is a belief that Diego Velazquez, a famous Spanish artist, is resting here.
»  At that time, relatives of the dead had to obtain the consent of the archbishop to bury the person in the crypt, as such type of burial was considered to be decent.
»  It has one unusual feature: some bodies have been badly preserved or partially destroyed but their outfits are still bright and the colors on fabrics have not faded. 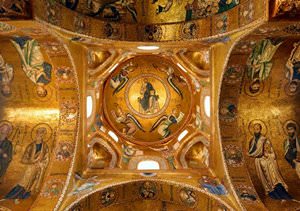 Facts:
» The Martorana church named in honour of the founders of the convent holds sumptuous wedding ceremonies. It is the seat of the parish of San Nicolò dei Greci. It’s official name is Co-Cathedral of St. Mary of the Admiral (Santa Maria dell’Ammiraglio) which is written on the building. San Nicolò dei Greci was built with the help of a famous naval commander (1143). The church was dedicated to the Mother of God – Santa Maria. The current prayer house has preserved the 12th-century Byzantine mosaics. The ceiling has a picture of Jesus along with the archangels. The internal structure of the building resembles a cross. One of the scenes shows a confessor falling down at the feet of the Mother of God. The interior decoration appears in the film The Talented Mr. Ripley. The name of the temple sounds similar to the marzipan fruit confectionary (frutta martorana) prepared by nuns for Easter. The house of God had been a part of a Greek parish for three centuries. Today, the cathedral is owned by the Italian government. It is a historic landmark and is protected by UNESCO.

Facts: » The duplex staircase leads to the inner rooms of the church. There is the statue of Saint Catherine (1685) above the gate.
»  The interior is decorated with a patterned marble. There are also a lot of gilded moldings. Everything - bas-reliefs, sculptures, and panels - is dedicated to great martyr’s life. The dome that crowns the building was constructed in 1744.
»  The church started to be built at the beginning of the 14th century. Aristocratic ladies who own real estates in the city decided to present them to the Order of Saint Dominic. It was planned to build a convent. The monastic church has been opened since 1310. The unprivileged and repentant women of easy virtue were accepted here.
»  Donations to the monastery were generous. The interior of the church was decorated with rich elements at the expense of patrons.
»  Many nobles preferred to live in the monastery like hermits.
»  Monastery abbess Sister Mary, the woman from the Count’s family, started to build the House of God in 1566. After the years of construction (in 1596), the building was blessed in honor of Catherine of Alexandria.

This guide to architecture monuments in Palermo is protected by the copyright law. You can re-publish this content with mandatory attribution: direct and active hyperlink to www.orangesmile.com.
Palermo - guide chapters 1 2 3 4 5 6 7 8 9

Plan your own tour over Palermo on the monuments map

Search for architecture monuments of Palermo on the map

Tours through neighbours of Palermo

Napoli
San Francesco di Paola is the most significant church built in a neoclassical style in Naples. The basilica was constructed upon the order of King Ferdinand I in 1815 to honour St. Francis who, as the king thought, helped him return the land occupied by the French. The architect of the basilica was inspired by the famous Roman Pantheon, so he built it in the style of a rotunda and decorated it with a 53-meter dome. The main treasure of the ... Open »
Rome
The Colosseum was the largest amphitheater in the entire ancient world. It could receive as many as 50,000 people. Originally, it consisted of four floors; the first three had wide arched entrances, while the fourth had rectangular doorways. From historical sources it’s known that grand gladiatorial games were held at the opening of the Colosseum. About 5,000 wild animals were released in one day. Roman Coliseum is depicted on 5-eurocent ... Open »
Florence
Santa Maria del Fiore means ‘the flower of St. Mary.’ The Cathedral is the most important in Florence and one of the largest churches in Italy. The Florence Cathedral is included in the UNESCO World Heritage List. At least six architects were employed in the development of the project and construction. A number of famous painters and sculptors, including Michelangelo, worked hard to decorate the Florence Cathedral. One of the most ... Open »
Sarajevo
The Cathedral of the Nativity of the Blessed Virgin Mary was constructed in 1863 on the petition of the Orthodox Community that asked the government of the Ottoman Empire for building the House of God. The sultan donated 556 gold coins to the construction of the temple. Merchants of Sarajevo paid the missing amount. The Russian Government gifted church utensils, theological books, robes for churchmen, and icons. The best artists were ... Open »
Nice
Sainte-Reparate Cathedral was built in 1699 in honor of the patroness of Nice. According to the legend, young Reparata from Palestine professed Christian faith and died in agony for this when she was 12 years old. Angels brought a boat with the young saint to Nice, to the shore of the Angel Bay that was named after this event. The cathedral is located in an old part of the city. It is a typical construction built in baroque style. The ... Open »
OrangeSmile.com - online travel reservation expert providing reliable car rental and hotel booking services. We feature more than 25.000 destinations with 12.000 rental offices and 200.000 hotels worldwide.
Secure Server