Video of flights over top monuments of Naples in HD format.
Use 'Full Screen' mode.
This review is a great opportunity to look at architectural landmarks of Naples from a new perspective – namely, from the sky. Click the video to enjoy a 3D flight over the architectural ensemble of Naples and to look at the most interesting landmarks in detail - at San Francesco di Paola, Castel Nuovo, Castel dell Ovo, Naples Cathedral, San Domenico Maggiore and many others. Below you will find the most amusing historic facts and professional photographs of every famous sightseeing in Naples. 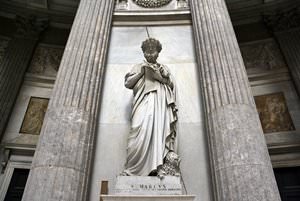 Facts:
» San Francesco di Paola is the most significant church built in a neoclassical style in Naples.
»  The basilica was constructed upon the order of King Ferdinand I in 1815 to honour St. Francis who, as the king thought, helped him return the land occupied by the French.
»  The architect of the basilica was inspired by the famous Roman Pantheon, so he built it in the style of a rotunda and decorated it with a 53-meter dome.
»  The main treasure of the interior is an altar of precious stones.
»  San Francesco di Paola is still one of the places where religious holidays are celebrated. Naples is rich in such places. The basilica always attracts many tourists. 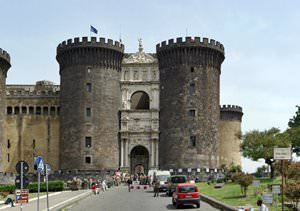 Facts:
» Castel Nuovo is a castle that was built by King Charles of Anjou on the sea coast in Naples when his capital was moved from Palermo. The construction began in 1279 and lasted three years.
»  Like other castles, Castel Nuovo had a heavy fate. It had been looted and destroyed for centuries. It endured everything and remained undamaged even after a terrible earthquake that destroyed almost entire Naples.
»  Today, there is the Municipal Museum in the territory of the castle. Here, you can learn about the history of Naples from the ancient time to nowadays.
»  Here, you can not only see a museum collection, but also visit temporary exhibitions.
»  The most interesting interior elements in the castle are ancient frescoes and sculptures on the ground floor. 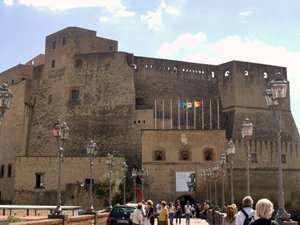 Facts:
» Castel dell Ovo is a medieval fortress that is located on the island connected to Naples with a narrow embankment.
»  It is supposed that it is here that Naples was founded by Greek settlers in the 6th century.
»  The modern castle was built here in 1139 to protect the city from the sea.
»  The castle gained its name (that is translated from Italian as “Egg Castle”) due to its unusual shape.
»  In the 15th century, the fortress was strengthened in the event of shelling. It was very useful because Castel dell Ovo was targeted with French cannons during Italian wars. 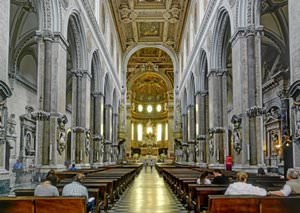 Facts:
» The Cathedral of Saint Januarius is a cathedral located in the historical center of Naples and blessed after the celestial patron of the city Saint Januarius.
»  The foundation of the church was laid in the second half of the 13th century. The construction was completed only at the beginning of the 14th century.
»  The main attraction of the cathedral is a chapel of Saint Januarius. It is decorated with frescoes and sculptures, one of which is a bust of the saint. The bust of Saint Januarius is made of gold and silver and decorated with luxury outfits and jewels.
»  In the crypt of the cathedral, the main relic, a bowl with Januarius’ blood, is kept. When the relic is shown to worshipers (on the first Saturday of May and on 19 September), the blood inexplicably boils.
»  The oldest part of the cathedral is the Basilica of Saint Restituta, through which you can enter the oldest preserved room of the building, the baptistry of St. John. 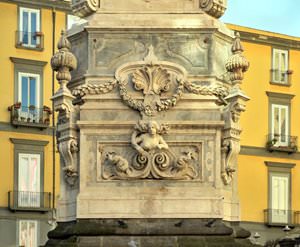 Facts:
» San Domenico Maggiore is a church located in the historic center of Naples. It is a part of the former and older Dominican monastery complex.
»  It is one of the most significant attractions of the modern city.
»  The temple started to be built in 1283 and was finished in 1324. It gained the status of the main church for Dominicans and nobles of the old Kingdom of Naples.
»  In the 13th-16th centuries, there was the University of Naples in the territory of San Domenico Maggiore. In 1239-1244, Thomas Aquinas studied and decided to become a Dominican here. In the modern church, there is a chapel and a symbolic cell constructed in honor of him. Later, Giordano Bruno and Tommaso Campanella graduated from University.
»  In the temple, there are a lot of chapels and tombs of local aristocrats. In the spacious sacristy of the temple, to the right of the altar, there are the remains of 45 members of Aragonese nobles under the high ceiling.
»  In the trove of the church, there are decorative elements of gold and silver and expensive outfits of Neapolitan nobles and Dominican bishops. Now, these outfits are used during celebrations and religious parades. 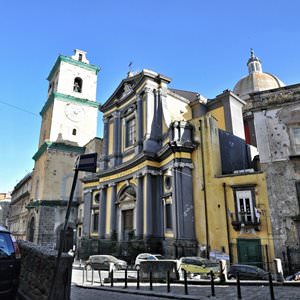 Facts:
» The Santissima Annunziata Maggiore is a Catholic cathedral located in the historic center of Naples.
»  The church was built at the site of an orphanage, which is shown by frescoes of the 14th century found here. Today, the preserved fragments of them are kept in one of the city museums.
»  In the late Renaissance and early baroque periods, the Santissima Annunziata Maggiore saw cultural progress. From the second half of the 16th century to the first decades of the 17th century, it was the most prestigious workplace for musicians.
»  Until 1950, the church served as an orphanage. In front of the cathedral, there was a special basket for babies left anonymously. Then, the basket with a baby moved to the inside due to special devices. Today, this device serves as an attraction for tourists.
»  The modern cathedral with chapels is a part of the medical complex (a maternity clinic and a pediatric department). 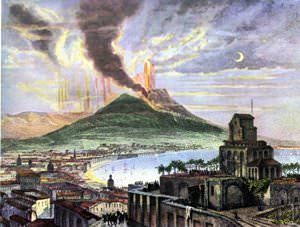 Facts:
» Vesuvius is a volcano that is located in the south of Italy, 15 km from Naples.
»  The volcano is a part of the Apennine mountain range and is 1 281 m high.
»  Vesuvius is one of the three active and one of the most dangerous volcanoes in Italy.
»  According to the data, it erupted 80 times. The most famous eruption took place on August 24, 1979, when such ancient Roman cities, as Pompei, Herculaneum, Oplontis, and Stabiae were destroyed.
»  Vesuvius erupted for the last time in 1944.
»  Nowadays, you can ascend the mountain only on a special path. There is a motor road from the foot of the volcano to the path. There is also a parking area at a height of 1 000 m.
»  The path is open from 9 am to 3 pm from December to February, to 4 pm from March to October, to 6 pm from April to June, and to 6 pm from July to August.

Facts: » The Catacombs of San Gaudioso are early Christian catacombs located in the northern part of the city. They had been used as a cemetery until the 17th century.
»  The Catacombs of San Gaudioso are a typical early Christian underground cemetery that was extended by Dominicans in the 17th century. In updated underground rooms, Dominicans dug quite unusual graves: “ambulance” rooms and “cantarellas”, or rooms for drying dead bodies.
»  Above the catacombs, there was a basilica called Santa Maria della Sanita. Its main altar is at a height of 10 m. Exactly under the altar, there is a spacious crypt leading to the catacombs.
»  When altars of the basilica were blessed, the relics of martyrs were transferred here from the catacombs of Saint Sebastian. Frescoes behind the altar depict the tragic death of saints, the remains of which are kept here. These frescoes were created by artist Bernardino Verro in the late 17th century. The only fresco of the 9th century that depicts the Mother of God with a Baby and two saints dates back to the period of Neapolitan bishop Athanasius (849-872). At that time, Naples saw the development of Byzantium art.
»  To the right of the main altar, there is an entrance to the oldest part of the catacombs.

CONTINUE - PART II »»
This guide to architectural sightseeing in Naples is protected by the copyright law. You can re-publish this content with mandatory attribution: direct and active hyperlink to www.orangesmile.com.
Naples - guide chapters 1 2 3 4 5 6 7 8 9 10 11

Build your walking routes in Naples on the landmark map

Architectural landmarks in the regions around Naples

Rome
The Colosseum was the largest amphitheater in the entire ancient world. It could receive as many as 50,000 people. Originally, it consisted of four floors; the first three had wide arched entrances, while the fourth had rectangular doorways. From historical sources it’s known that grand gladiatorial games were held at the opening of the Colosseum. About 5,000 wild animals were released in one day. Roman Coliseum is depicted on 5-eurocent ... Open »
Palermo
The relics of Saint Rosalia rest in the cathedral church. She is considered as its intercessor. Tombs of the nobles who contributed much to the development of the Kingdom of Sicily have been preserved in honor of them. At the beginning of the 12th century, the first ruler was crowned in the Church of the Assumption of the Virgin Mary. The construction resembles a castle. The House of God differs from the mundane one with its bell tower and ... Open »
Dubrovnik
Dubrovnik is famous for its shield in the form of 2-kilometer fortress walls. The complex is located on the rocky bank. There are additional fortifications in some places. Starting from the historic center, the walls create a circle and turn the city into an impregnable fortress. The fortification was constructed in the 10th century. The limestone walls have been repainted many times for the last centuries. They gained their current appearance ... Open »
Florence
Santa Maria del Fiore means ‘the flower of St. Mary.’ The Cathedral is the most important in Florence and one of the largest churches in Italy. The Florence Cathedral is included in the UNESCO World Heritage List. At least six architects were employed in the development of the project and construction. A number of famous painters and sculptors, including Michelangelo, worked hard to decorate the Florence Cathedral. One of the most ... Open »
Sarajevo
The Cathedral of the Nativity of the Blessed Virgin Mary was constructed in 1863 on the petition of the Orthodox Community that asked the government of the Ottoman Empire for building the House of God. The sultan donated 556 gold coins to the construction of the temple. Merchants of Sarajevo paid the missing amount. The Russian Government gifted church utensils, theological books, robes for churchmen, and icons. The best artists were ... Open »
OrangeSmile.com - online travel reservation expert providing reliable car rental and hotel booking services. We feature more than 25.000 destinations with 12.000 rental offices and 200.000 hotels worldwide.
Secure Server