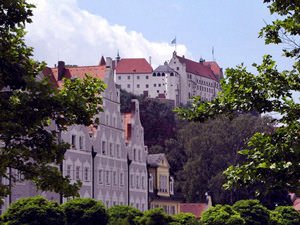 Landshut has preserved many interesting historical sites. One of the main symbols of the city is Rathaus, the old Town Hall. The 16th-century Gothic building is now located on the main city square. It is a very peculiar architectural monument, as the Town Hall was once built on the site of three older residential houses of 15th-16th centuries. During the construction, it was decided not to destroy but simply renovate and unite them into a single bigger building. The Town Hall is notable for its spectacular facade decoration, it is still used for holding ceremonial meetings and gatherings. Guided tours of the Town Hall are organized almost every day, its central hall is also a permanent venue for musical concerts and theatrical performances.
Family holidays with kids in Landshut. How to entertain your child, things to show to children.
Landshut is attractive with its distinctiveness and color. Not only to adults but also to kids who should definitely be shown the city with all its interesting attractions. And there are …

Open
No less interesting is another historic attraction such as Trausnitz Castle. The very first fortification was erected in its place at the beginning of the 13th century. After a while, a small town was formed around the castle. Throughout a long history of its existence, the fortress has been repeatedly rebuilt. Unique architectural elements are left here from each historical period.
A beautiful chapel and the tallest tower date back to the Middle Ages, and a charming courtyard with galleries was built in the Renaissance. Now the whole territory of the old castle is available for tours, an interesting collection of antiques is kept within its walls. Here you can see sumptuous antique furniture, tapestries and paintings, as well as personal belongings of the castle's former owners. Copyright www.orangesmile.com
Cuisine of Landshut for gourmet with top restaurants and cafe
Landshut is a great place to experience traditional Bavarian cuisine. The city boasts many attractive restaurants and bars where you can taste everyday local dishes, as well as enjoy the …

Open
For many years, the castle was owned by representatives of the ducal family of Wittelsbach, among whom were famous scholars and collectors. They collected very interesting collections of unique things, some of which are presented in the castle today. Travelers visiting the fortress in the summer will have the opportunity to stroll through the picturesque surrounding garden. 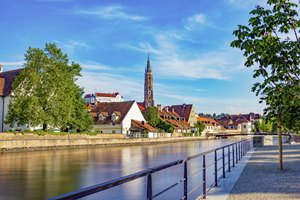 The main religious landmark of Landshut is the Church of St. Martin (Martinskirche), which is another vivid example of Gothic architecture. The construction of this church began at the turn of the 14th-15th centuries and lasted for almost a hundred years. Martinskirche was built solely on donations from local residents. The main architectural feature of the medieval church is a high brick tower, which was recognized as unique of its kind.
Authentic traditions, festivals and lifestyle of Landshut inhabitants
Landshut is an incredibly interesting city for exploring the traditions and customs of local people. Here they celebrate some of the most original and beautiful Bavarian holidays. The …

Open
The height of the tower is 130 meters, the very first project of the church was developed by the famous architect Hans von Burghausen. The church turned out to be very large, with five entrances, decorated with interesting sculptural compositions. Many unique artifacts are stored within the walls of the church. It houses a crucifix created in 1495, as well as an old Madonna sculpture. An 18th-century organ is considered one of the main treasures of the shrine. All visitors can climb a bell tower of the church, you'll need to overcome a steep staircase of 495 steps for this. 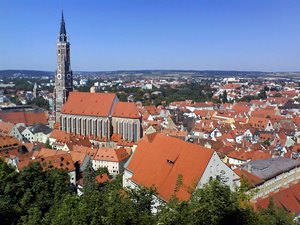 The old market square Altstadt is very popular among those who love walking on foot. It is surrounded by picturesque historic buildings, one of the richest markets in Bavaria was located on this square for many years. Now the square is a permanent venue for holding major cultural and social events, as well as fairs. Charming historical streets paved with cobblestones begin from the square.
Your active city break in Landshut. Attractions, recreation and entertainment - best places to spend your day and night here
Near the old fortress is the beautiful park Hofgarten, one of the most beautiful places in town. It is ideal for walking and outdoor activities, once the territory of the picturesque park …

Open
A striking architectural monument is the Palace Stadtresidenz, built in the best traditions of the Renaissance style. Now the splendid palace with a well-preserved decoration is converted into a cultural center. It often hosts art exhibitions, literary evenings and musical concerts, as well as special programs devoted to significant historical events. 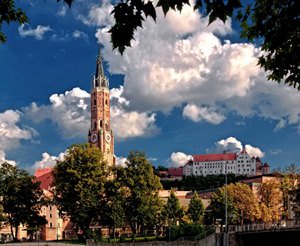 Another historical site of interest is Betzdorf Palace located in the heart of the city. Its richly decorated facade makes it one of the most recognizable local attractions. Beautiful stucco elements and other unusual decorations have been preserved on the facade. It is painted in white and pink tones, which gives the whole building a special gracefulness. The beautiful palace was built in 1745 for the wife of one of the noble local dukes. It has managed to preserve some elements of its original interior decoration. Currently, the building belongs to one of the private large companies, therefore it is not available for tours. Nearby is the old post office Alte Post, whose facade is adorned with elaborate frescoes. The beautiful building dating back to the 16th century looks like a huge artistic canvas.

In the section below, you can get one of our excursion, activities or city discovery tours over Landshut and surroundings. Our website offers 10-30% lower ticket prices, when compared to the offline purchase on the spot.

This guide to cultural sights Landshut is protected by the copyright law. You can re-publish this content with mandatory attribution: direct and active hyperlink to www.orangesmile.com.
Landshut - guide chapters 1 2 3 4 5 6 7
Reference information
Map of all palaces

Cathedrals and basilicas near Landshut
♥   Gnadenkapelle, Altötting, 51.7 km from the center. On the map

♥   Basilika Mariä Himmelfahrt, Tuntenhausen, 67.3 km from the center. On the map

Photogallery of cultural heritage of Landshut

Excursions over cultural sights of neighbours of Landshut

Bavaria
A very interesting historical object is Feste Coburg fortress located on a hill of 450 meters height. It is the most extensive fortifications in Germany. Currently, there is a very interesting museum in walls of the fortress. Its exhibits include a collection of the Dukes of Coburg; there are pictures of prominent European artists, unique jewelry, antique furniture, and one of ... Open »
Ingolstadt
Ingolstadt amazes its guests with the abundance of museums and galleries. There are suitable venues for tourists of all ages and with different tastes. The Museum of World War I, which is open in a beautiful building, has a very interesting exhibition dedicated to the most important events of the war period. The German Museum of Medicine History also exhibits a very ... Open »
Dachau
Vacations in Dachau would certainly suit those who like to walk in beautiful natural places and enjoy the magnificence of nature away from noisy megacities. Those who can not imagine traveling without walking through busy streets and visiting all kinds of cultural and entertainment venues can be advised to visit Munich. This popular tourist city is less than half an hour’s ... Open »
Munich
Cathedral of Our Lady is, without a doubt, an important tourist attraction of the city. This is also the largest cathedral in Bavaria. The first church on the place of the cathedral was built back in the 12th century. The construction of the cathedral, which travelers can see today, took place in the 15th century. The high spire of the cathedral is visible from almost every ... Open »
Salzburg
Salzburg Cathedral is the best-known religious landmark of the city. Originally a Romanesque church stood on the site of the magnificent cathedral. Today only a survived ancient font remains of that church. This is the place where took place the christening of Mozart. The interior decoration of the cathedral was performed by the famous architect Santino Solari. Even nowadays ... Open »
Kirchberg in Tirol
For example, there is a half-timbered house with a mansard roof, built in the 18th century. People still live in it. The local post office building is also interesting. It was built in the 19th century and has existed unchanged since then. The Order of Poor Clerics Regular of the Mother of God of the Pious Schools, also known as piarists, deserves attention. It was quite an ... Open »

Culture guide to Landshut. Which fascinating sights to visit once you are in Landshut: temples, churches, museums, theaters and castles. Recommendations (with addresses, phone numbers and links) on the places 'must visit' in Landshut. Plan your own city excursion by using this page info!