Family holidays with children in Italy - attractions and entertainment 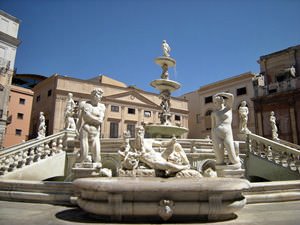 Italy will be an ideal place for a vacation with children as locals adore them. The conditions for a comfortable stay with kids are not only in hotels, but also in all restaurants, shopping centers, cafeterias or cinemas. Italy is the country with the richest history in the world, and therefore its small guests will find it incredibly useful and interesting to visit its sights and museums. In the Vatican, one can see unique Egyptian artifacts and ancient mummies, and in Rome walk through the Roman Forum, where thousands of years ago the fate of the inhabitants of the Roman Empire was decided. In Italy, there are numerous amusement parks and aqua parks, where you can spend an unforgettable time with the whole family.
Unique sights of Italy from our series 'Extreme places on Earth'
These spots really worth the attention of a real traveler-researcher. …
Read further
The most comfortable family vacation is waiting for tourists in Sardinia and Sicily. In Sicily there is an aqua park "Montreal", located near the city of Palermo. The aqua park offers its guests a lot of entertainment: water slides and attractions, terraces with umbrellas and sun loungers, bars and cafes. But the largest and most popular aqua park on the island is the Etnaland Park, which is a huge lagoon with blue water. The park is popular not only in Italy, but also throughout Europe. Exciting attractions, the opportunity to go rafting on an artificial mountain stream, numerous bars, cafes and restaurants awaits its guests. In "Etnaland" you can spend the whole day enjoying unlimited opportunities for recreation.
Not far from Rome is another unique place for children's entertainment - aqua park Zoomarine. The park covers an area of more than 30 hectares. On its territory there are not only water slides, but also theme shows with aquatic animals. It is divided into several thematic zones: an island of dolphins, a forest of parrots, a glade of birds of prey, and a bay of pinnipeds. Another fascinating aqua park is in Veneto and it unites the park "Movieland Park" and the aqua park "Caneva". "Movieland Park" is dedicated to cinema, in which guests can feel themselves as heroes of adventure films with the help of realistic scenery and spectacular rides. The water park "Caneva" invites guests to relax on the real white sand, visit the "pirate lagoon" or go down on one of the many attractions. Copyright www.orangesmile.com
Top architectural sights of Italy
Monuments and architectural objects, notable for the history and culture of the country. …
Read further
On the island of Garda is one of the most fascinating parks of the country - "Gardaland", the Italian analogue of Disneyland. In this amazing place, every visitor becomes a full participant in what is happening. Children can participate in the excavation of the Egyptian pyramids, experience unforgettable emotions from the feeling of a holiday that does not leave throughout the day. For both children and adults numerous colorful attractions are available. One of the most terrible rides in Europe is located in “Gardaland”. Another fascinating amusement park for children is located not far from Rome. In the park "Rainbow Magic Country", the main theme of all the scenery and attractions is mysterious magic. Children and their parents fall into the real realm of fairies and wizards. The park occupies a huge territory - more than 60 hectares, you can ride on 30 different attractions. 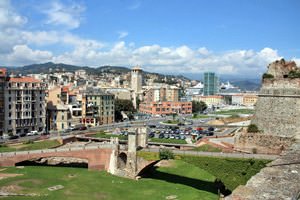 Not far from Rimini is the park "Italy in Miniature", where you can get acquainted with miniature copies of the most famous Italian sights. In one visit, visitors are presented with more than 250 miniatures. Among them are the Pantheon, the Coliseum, the Roman Forum, the Leaning Tower of Pisa, and the Sistine Chapel. One of the largest amusement parks for children in Italy is the theme park "Fiabilandia", dedicated to the most popular fairy tales. In the park there are more than 30 attractions and a children's disco, where adults are categorically forbidden. While children are watched by the park's staffs, parents at this time can relax in one of the cafes.
Italy sightseeing - top places to visit
Nearly every city in Italy is a large historic centre with numerous places of interest. Rome, Milano, Venice and Florence remain major tourist …
Read further
Animal lovers will be able to visit the zoo in Rome, located on the territory of Villa Borghese. The zoo is home to peacocks, lions, tigers, hippos, crocodiles, elephants, buffaloes, macaques. More than 1500 animals live in the Natura Viva Park on Lake Garda. Also in Italy there numerous children’s museums, the visit of which will not only be interesting, but also useful. In the Children's Museum Explora, children can immerse themselves in a relaxed atmosphere and try on different professions: firefighter, agronomist or seller. Also in the museum, children will be able to study some patterns of nature in the form of a game, visit a labyrinth or a special game zone.

♥   Aquarium 'Alghero Aquarium' . On the map

♥   Aquarium 'Aquarium of Cattolica' Cattolica. On the map

♥   Aquarium 'Aquarium of Leghorn' . On the map

Tower Of The Milices 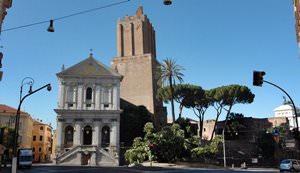 Tower of The Milices is one of the most interesting medieval monuments in Rome. It was built in the 13th century. The tower has an impressive scale. The length of its sides is about 10 meters. The tower is 50 meters high. A strong earthquake occurred in Rome in 1348. The lower floor of the tower was damaged as a result. It was during this period that the deviation of the building from the vertical axis began. The tower was owned by many wealthy residents of the city after construction. Representatives of the Annibaldi Family were among its first owners.

The tower owes its name to the fact that it was originally built as a military post. The tower is located in the vicinity of the Church of St. Catherine today. This church was built in 1628. Researchers believe that its construction … Read all

The towers of Bologna have been considered one of the main attractions of the city for many years. There are a lot of tower buildings of different periods in the city. The very first of them began to be built in the 11th century. There were about 200 tower structures on the territory of the city in the Middle Ages. Only 20 of them have survived to this day. The Garisenda and Torre Degli Asinelli towers are the most interesting. They are located close to each other. The towers are notable for the fact that they have leaned heavily over the years.

Torre Degli Asinelli tower was built in the first half of the 12th century. Its height is 97 meters. It originally belonged to one of the city's noble families. The tower was used as an important defensive structure during the Middle Ages. The … Read all
All unique sightseeing Italy

Top cities of Italy for children

Rome
A vacation in Rome is simply impossible to imagine without a family visit to the zoo. The Rome Zoo is home to more than 200 types of rare animals. This is the right place to see cute lemurs and giant elephants, watch reptiles in a special cage and see the rarest representatives of the Mediterranean wildlife. Various exotic plants are one more interesting feature of the zoo. These plants were brought to Rome from different parts of the world. Small children will be in love with a little train … Read more

Alghero
On a sunny day, visit Butterfly House Sardegna, a popular butterfly garden situated in the neighborhood of Alghero – Olmedo. The butterfly house is a fairytale oasis with hundreds of different blooming flowers and exotic plants. Butterfly House Sardegna has a unique collection of insects. More than a hundred different butterfly species live here. It is so pleasant and simple to spend the entire day in this picturesque garden, watching beautiful butterflies of different colors and sizes. By … Read more

Florence
Older children will find much fun in the Museum of Geology and Paleontology (the Museo di Storia Naturale di Firenze), which collection is nothing but unique. The exhibition includes skeletons of ancient animals and figures of dinosaurs that inhabited our planet millions of years ago. There is also a rich collection of archaeological artifacts in the museum, and all children are recommended to take a look at it. Vecchio Museum is one of the most unusual museums in the city, which is also good … Read more

Milan
Cascina Cuccagna mansion is one more perfect place for relaxation. The house was built in 1695. Currently, the beautiful historical building is known as a multi-functional entertainment center that also has a charming trattoria. For many years, it has been used to host various master-classes. Interesting lessons devoted to different types of art are regularly held for children of all ages. Besides that, the old mansion has a big adjusting garden with a shop that sells organic products. Everyone … Read more

Venice
There is a no less interesting park nearby – Movie Land. As one can guess from the name, it’s a thematic park. Movie Land is dedicated to famous modern films, so it also offers a wide range of unique attractions. Here visitors can walk in a place with magnificent flora and learn a lot of interesting information about the process of film making. Shopping is hardly a favorite activity for children, of course, unless toy stores are involved. In Venice, there is an absolutely fantastic shop … Read more

Naples
A must-have for a family vacation in Naples is a visit to Lo Zoo di Napoli. This zoo is adorned by many living trees and plants, as well as artificial ponds. Some inhabitants of the zoo are almost tame - visitors will have the opportunity to feed friendly lamas or watch hippos living in a large pool. The zoo also has many dangerous predators, including brown bears and crocodiles. The city also offers a great aquarium called Anton Dohrn Aquarium, which is mainly visited by traveling … Read more

Bologna
The park Piazza Trento Trieste does not have a large area. However, it attracts with its unique design. This beautiful small park is especially interesting to visit in the spring, when the trees bloom in it. In summer, the youngest visitors can run along the paths around the fountains and try branded sweets at a local cafe. For the locals, the park has become a favorite place for a picnic. Here you can arrange a wonderful family dinner in the open air. One of the favorite entertainments … Read more

Asti
They will surely be impressed by fossilized skeletons of prehistoric animals. The museum's collection is very diverse. During special children's tours, it's even allowed to hold some of the exhibits in hands. Your kids will learn a lot about the amazing marine creatures that existed on the planet millions of years ago. The museum also has several beautiful aquariums where visitors can watch colorful fish. The museum is located in a very beautiful historic building, which makes the tours even … Read more

Map of Italy cities for family trip with kids