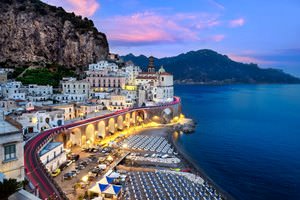 Italy is one of the most popular places for tourism and therefore its hotels are known far beyond its borders. In the castle hotel Las Villas Tronas on the island of Sardinia, which was built in the late 19th century, legendary guests liked to stop; Exupery, Richard Burton and Elizabeth Taylor. Westin Excelsior Hotel is one of the most prestigious and well-known in Rome. In the 60s, the legendary film Fellini's "Dolce Vita" was filmed. Another hotel in Rome, Hotel de Russie, is also incredibly popular among celebrities - in different years it was visited by Monica Bellucci and Al Pacino. also has its own miraculous history. Several centuries ago, the villa belonged to the rich Bernadini family, members of which decided to transform the old family mansion into a hotel in 1950. They personally designed rooms for future guests of the hotel and carefully selected elements of the décor. Besides gorgeous design, Villa del Parco exhibits a large collection of antique furniture and paintings. It’s particularly interesting to look at portraits of first owners of the old house. Experienced travelers recommend booking mansard guest rooms on the top floor of the villa due to their incredible charm and coziness. Villa del Parco is a fantastic choice for romantic couples and travelers who want to relax in a serene atmosphere.
Check the hotel prices and availability
Hotel La Scaletta, Florence One of the banks of the Arno River is home to one more hotel, Hotel La Scaletta

, which is known as one of the most popular hotels in the midscale category. An optimal combination of price and quality of service remains the main advantage of this hotel. At Hotel La Scaletta, travelers get a maximum number of services for a reasonable pay. Guest rooms made in romantic style with a fully equipped bathroom with beautiful ceramic tiles décor, a daily buffet type breakfast with a wide range of continental cuisine dishes, and great location in a magnificently beautiful part of Florence – these are enough to make Hotel La Scaletta one of the most popular hotels in the city.
Check the hotel prices and availability
Copyright www.orangesmile.com is open in a carefully restored noble mansion of the 18th century. An exclusive stay at this wonderful hotel will be truly unforgettable. Convenient location just a couple of minutes away from the bank of the Arno River and outstanding historic landmarks make the hotel very popular with fans of excursions. A walk in marvelous corridors of Hotel Executive will also leave many pleasant memories. The hotel hosts a large collection of ancient frescos, paintings, and sculptures. Moreover, the collection of antique furniture at Hotel Executive is considered one of the most interesting in the city. Every morning, guests of the hotel enjoy a diversified buffet type breakfast.
Check the hotel prices and availability is one of the oldest and most prestigious hotels in Venice. First guests appeared there yet in the 14th century. The unique palace, in which the original hotel was open, has been carefully restored. Later, new guest rooms appeared in the neighboring historic buildings that were constructed later. During its long history, the hotel greeted many famous guests. Luxuriously decorated guest rooms attracted Charles Dickens, Frederic Chopin and George Sand. Each of the palaces in the complex has its own miraculous story. The oldest building belonged to the noble Dandolo family. The 14th-century palace still has the carefully preserved apartment of the Doge. Without a doubt, that’s one of the most luxurious guest rooms in whole Venice.
Check the hotel prices and availability , has already become a true historic landmark of Rome. The opening of the luxurious hotel took place in 1894. St. Regis Rome was the first hotel in the luxury segment in the Italian capital, so no wonder why the guest book of St. Regis contains names of royalties, outstanding artists, and writers. Such famous people as Queen Elizabeth II and the King of Spain Alfonso XIII chose to stay at magnificent suites of the hotel.
Check the hotel prices and availability . Besides luxurious guest rooms made in pastel colors, clients of the hotel are welcome at the national cuisine restaurant and spacious terraces with panoramic views of the flamboyant historic district. The roof of the hotel has been turned into a wonderful relaxation area with a panoramic swimming pool, furnished terraces and an open terrace of the bar. Grand Hotel Minerva is popular with a wide range of travelers. There are guest rooms for both single visitors and large groups.
Check the hotel prices and availability has remained the most famous and symbolic hotel in Verona for many years. It has long been granted the status of an outstanding city landmark; the hotel is in the immediate vicinity of the Church of St. Anastasia and occupies a unique 14th-century building. One of the main features of the hotel is its luxurious interior striking with the abundance and variety of antiques. Pieces of antique furniture and artistic masterpieces can be seen not only in its public areas but also in the rooms; the hotel carefully preserves the refined and aristocratic atmosphere of past centuries.
Check the hotel prices and availability , which is located on Piazza della Repubblica, is famous far beyond the borders of Florence. The look of the high-class hotel is the result of work of famous architects and fashion designers of the country. Hotel Savoy is a great combination of best national traditions and modern charm. The popular hotel makes up a complex with the L'Incontro restaurant that has been managed by star chef Fulvio Pierangelini for many years. The restaurant will be certainly liked by fans of high cuisine. All dishes served in L'Incontro are made in accordance with the chef’s recipes. The restaurant is also famous for its rich collection of wine that has been brought from different parts of the country.
Check the hotel prices and availability is a true legend of Rome. Ever since the opening in 1906, it has been acknowledged as the most prestigious hotel in the city. For more than a century, the hotel has been attracting numerous celebrities. The world’s richest people stayed at Westin Excelsior, so even nowadays many travelers and locals visit the prestigious Doney restaurant hoping to see movie stars or famous musicians. In the 60s of the previous century, Frederico Fellini chose the luxurious hotel as the main filming spot for his famous Dolce Vita.
Check the hotel prices and availability
Hotel Villa Betania, Florence Hotel Villa Betania

is surrounded by a picturesque green garden. This is a charming family hotel that has won love and dedication of thousands of tourists during its long history. Guest rooms are made in modern style and feature light wood furniture, while décor of public spaces remind of the previous centuries. The hotel still has the original stone décor and several ancient frescos, while beaten stair railings and national style accessories only add charm to this magnificent hotel. Hotel Villa Betania is famous for its secluded and peaceful atmosphere.
Check the hotel prices and availability
Il Sogno di Giulietta, Verona No less symbolic and interesting is five-star Il Sogno di Giulietta

Hotel. The top-class hotel is primarily notable for its location, as it stands in the Juliet's Courtyard - one of the most iconic attractions of Verona. This particular courtyard was described by William Shakespeare in his tragedy. Il Sogno di Giulietta is considered an ideal hotel for a romantic stay in Verona. Its unique double rooms are individually decorated with priceless antique furnishings, rich fabrics, and works of art. Separate rooms offer a wonderful view of Juliet's Courtyard; guests will also have a chance to book one of the rooms including a panoramic balcony. Another secret kept by Il Sogno di Giulietta Hotel is the access to the famous courtyard in the evening hours when it is closed to the public.

Photogallery of architecture of Italy

Rome
Besides a long list of rich and noble guests, the most famous hotel in Rome has one more peculiarity. The biggest suite in Europe, Villa La Cupola, is open at this hotel. The size of the suite is, indeed, striking – more than 560 square meters. A day in the fantastic Villa La Cupola costs 11,000 euro. In addition to numerous rooms with fabulous design, the suite has 170 square meters large open terraces and balconies. Villa La Cupola got a revamp during the latest reconstruction in 2000, so … Read more

Florence
Travelers, who enjoy staying at resort hotels, are usually fascinated with Grand Hotel Minerva. Besides luxurious guest rooms made in pastel colors, clients of the hotel are welcome at the national cuisine restaurant and spacious terraces with panoramic views of the flamboyant historic district. The roof of the hotel has been turned into a wonderful relaxation area with a panoramic swimming pool, furnished terraces and an open terrace of the bar. Grand Hotel Minerva is popular with a wide range … Read more

Venice
The opening of the hotel took place in 1958. The idea of building a luxurious hotel near San Marco Square belongs to Giuseppe Cipriani, the founder of the legendary Harry’s bar. In 1968, an important event happened in the hotel – a large, Olympic size swimming pool was opened there. Even nowadays, the swimming pool is a true gem of the Cipriani’s infrastructure. A part of the high-class guest rooms of the hotel is open in the famous Palazzo Vendramin – a unique palace that dates back to … Read more

Verona
In addition to luxury suites, the hotel has another attractive characteristic - a rich history full of remarkable events. Among the hotel's famous guests Goethe and Mozart, as well as Louis XVII of France who stayed at the hotel during the exile. This is where its secret coronation took place, which was only known to a narrow circle of people. The luxurious hotel is still popular among world celebrities. Thus, Versace and Robbie Williams, Joe Cocker and Anthony Hopkins, Sophia Loren and George … Read more

Map of legendary hotels in Italy