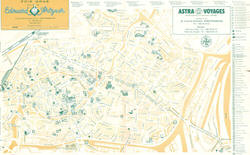 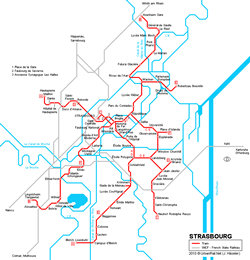 Interactive maps of hiking and biking routes around Strasbourg

1. You can zoom in/out using your mouse wheel, as well as move the map of Strasbourg with your mouse.
2. This interactive map presents two modes: 'Biking Routes' and 'Hiking Routes'. Use the '+' button on the map to switch between them.

This Strasbourg map has two modes: 'Railway Network' and 'Landscape & Rural Map'. Use the '+' button on the map to navigate.

Our guide to Strasbourg

If you visit Strasbourg at Christmas Eve, it’s highly recommended to visit the Christmas Market that is truly the most beautiful in the country. Another way to spend a great evening is to visit UGC Cine Cite cinema showing the best world movie premieres. Nightlife fans may like originally named Opera Cafe club that can offer a huge dance floor and a wide selection of cocktails. Interesting excursions … Open

The Au Crocodile restaurant specializes on international meals. Visitors are welcome to take a sit at well-served round tables at the hall decorated with live plants. Despite its upscale status and luxurious atmosphere, prices in Au Crocodile are quite affordable. Youngsters prefer continental food in the Piano Grill restaurant that serves visitors till late at night. Deliberate entertainment shows will complement … Open

A beautiful church of St. Peter The Young was built in the 11th century. It is also a real gold mine of historical and artistic values. The church contains unique frescoes of the 14th century. Its hall is illuminated by huge chandeliers. Massive antique furniture made of dark wood is everywhere. The most exciting architectural landmark is the house of Kammertzel. It was built in the 15th century. After the last … Open

3. July and August are the hottest months of the year; the average daily temperature during this period is about +25 °C. Many tourists visit Strasbourg in summer, also the high tourist season is during Christmas holidays. 4. The central part of the city is almost completely closed to vehicles; a popular mode of transport is bike. The most popular bike rentals among holidaymakers are near the train station and on … Open

Another important place to visit is the Baroque Rohan Palace. Since late 19th century it hosts three museums: The Musee des Beaux-Arts de Strasbourg, Musée archéologique and Musee des Arts decoratifs. Palace has survived in its original form. Its cultural venues are visited by hundreds of tourists every day. The palace was recently open after throughout reconstruction and today everyone can walk through richly … Open

The old part of the city is home to numerous buildings of 16 - 17 centuries. Walk along these streets, and you will see many old houses with cozy patios. Nice souvenir stores and craft shops have been opened in the majority of buildings, so visitors will find here much interesting. If you arrive to Strasbourg on Christmas Eve, you will simply not recognize the old quarters. All buildings are literally drowned in … Open

Maps of Alsace
Those preferring a more unhurried stay have to choose Strasbourg. Here you can find an incredible amount of entertainment centers and shops to suit all tastes. At weekends there are great markets in Strasbourg. Colmar has amazing Rue des Boulangers. Like many hundreds of years ago, the first floors of buildings are occupied with various bakeries, confectioneries and ... Open »
Maps of Baden-Baden
Summer beach complex "Thermalstrandbad Baden" attracts primarily young people due to its breathtaking water slides, diving towers, and sports grounds. But in the Thermalbad Vöslau center, you can have a more peaceful holiday - swimming in the open air here can be combined with a variety of therapeutic procedures and walks through the forest.Fans of easy leisure will be ... Open »
Maps of Freiburg im Breisgau
Freiburg is famous for an abundance of first-class fitness centers and wellness centers; many of them are located in large hotel complexes. Many travelers come to Freiburg not only in search of new experiences and entertainment, but also to improve their health. The city doesn’t feature noisy nightlife, but it has cozy bars and pubs as an alternative. Many of them serve ... Open »
Maps of Karlsruhe
Waldseilpark Karlsruhe is one more fantastic destination for all fans of active recreation. Here, visitors can try high rope climbing. To the service of guests, there are 7 different trails with different difficulty levels. Friendly, family-like atmosphere of this place makes it even more pleasant to visit Waldseilpark Karlsruhe. Many tourists enjoy making picnics in the ... Open »
Maps of Saarbrucken
The City market is another attractive shopping establishment of the city. The center offers its customers a vast choice of goods produced in Turkey. Despite rater low prices the goods are of extremely high quality and of rather attractive image. The city offers numerous stylish nightlife establishments. The most popular clubs and bars among them are located in the area of the ... Open »
Maps of Stuttgart
A tour through local shops would also give a lot of impressions. Trade pavilions for every taste and budget can be found in Stuttgart. You can purchase quality shoes at most attractive prices in Ara Shoes stores. Those who hope to bring back some jewelry are advised to visit the Rent a juwelier shop; Geschwisterliebe specializes in stylish clothes. Fans of shopping that may be ... Open »
OrangeSmile.com - online travel reservation expert providing reliable car rental and hotel booking services. We feature more than 25.000 destinations with 12.000 rental offices and 200.000 hotels worldwide.
Secure Server