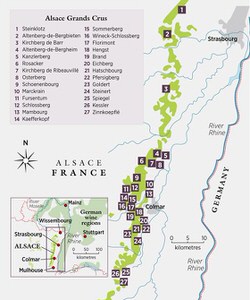 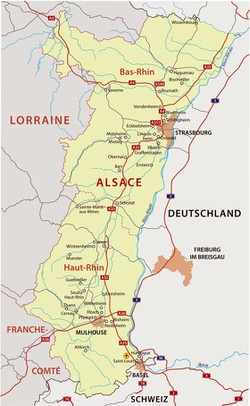 Interactive maps of hiking and biking routes around Alsace

1. You can zoom in/out using your mouse wheel, as well as move the map of Alsace with your mouse.
2. This interactive map presents two modes: 'Biking Routes' and 'Hiking Routes'. Use the '+' button on the map to switch between them.

This Alsace map has two modes: 'Railway Network' and 'Landscape & Rural Map'. Use the '+' button on the map to navigate.

Our guide to Alsace

Traditions and mentality of Alsace

It is simply impossible to imagine the journey around the picturesque Alsace without buying souvenirs; for many tourists shopping trips turn into an exciting adventure. The fact is that national souvenirs are the true embodiment of local traditions and customs; not everyone knows that the stork is a symbol of Alsace. You can see graceful and unhurried birds literally everywhere, including major cities of the region. … Open

One of the main symbols of the region is Mount Sainte-Odile. The ascent of its top is very popular with fans of active holidays. The mountain is 764 m high and you need no special skills to climb it. On top of the mountain, there is an old monastery, a very important pilgrimage and a historic place. You can also see here the mysterious old construction that is called The Pagan Wall. This is a megalithic object … Open

1.It’s convenient to travel the province on high-speed TGV trains; they can be an alternative to quite comfortable buses. Tourists always have an option to rent a car; it is worth noting that there are free roads connecting towns of Alsace. 2. The province is characterized by a fairly dry climate; summer is always pretty hot and winter is cold. Those who expect to devote a lot of time to hiking and excursions … Open

Speaking of culinary traditions of Alsace, it’s worth to mention delicious local cheeses. Gourmets from around the world appreciate Munster cheese having a very spicy peppery flavor. Its recipe belongs to the monks of the Benedictine monastery; you can enjoy real Munster only in Alsace. Cheese serves as a complement to a variety of dishes, as well as a basis of numerous interesting sauces. The most common … Open

Travelers staying on vacation with children should definitely spend a couple of days in Mulhouse and visit the local zoo. It was founded in 1868 and is considered one of the most beautiful zoos in France. Its spacious enclosures are inhabited with about 1,200 animals; it’s also worth noting that the zoo is combined with an incredibly beautiful botanical garden. There is a special seating area for younger … Open

Old town of Colmar will appeal to fans of excursions; there are several historical buildings of different eras on its territory. Most visited monuments are maison Adolph built in the mid14th century, and the old customs building, Ancienne Douane, constructed during the second half of the 15th century. Among the religious monuments of Colmar, Church of St. Martin is notable; it is a true example of 13th century … Open