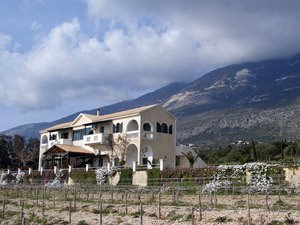 Kefalonia’s culture and traditions are unique, the island is shrouded in many beautiful legends and stories. It has unique symbols and features, which can't be explained scientifically so far. A very beautiful legend is associated with Melissani Lake that was named after a nymph who suffered from unrequited love for the god Pan. The nymph wept so much that her tears have formed a lake. Not so long ago, interesting finds were found at the bottom of Melissani. Here, archaeologists discovered an ancient clay sculpture of the god Pan and the nymphs.
Cuisine of Kefallonia for gourmet with top restaurants and cafe
Kefalonia is a region with very interesting culinary traditions. Excellent wine, cheese and honey are produced on the island. Local restaurants use these products to cook delicious food, and …

Open
Today, local people have an interesting tradition: all couples in love must come to the lake to stay together forever. For this, lovers should join hands and lower them into the water. After this ritual, their love will be eternal. Those who have not yet found their love need to wash with the lake water.
The island of Kefalonia is associated with an amazing religious phenomenon, a scientific explanation for which has never been found by researchers. It is connected with the ancient Dormition of Virgin Mary Church located in the town of Markopoulo. Every year on August 15, locals celebrate a holiday dedicated to the patron saint. On this day, an enormous number of snakes always crawl to the temple. Copyright www.orangesmile.com
Excursion over cultural sights of Kefallonia - 'must visit' points of interest
Numerous religious monuments, which simply strike visitors with their beauty and grace, remain the main sights of Kefalonia. The Monastery of St. Gerasimos remains the permanent symbol of …

Open
Some snakes having a black cross-shaped pattern on their heads creep on to the ancient icon of Our Lady of Fidus inside the temple, while others just stay on its adjacent territory. On this holy day, even dangerous poisonous snakes never sting people and can be safely held in hands. The amazing phenomenon has been repeated every year for several hundred years, there are no scientific explanations for what's happening here. 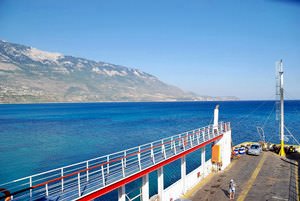 If a large number of snakes is not observed near the temple on the day of the holiday, locals consider this a bad omen. Over the past hundred years, snakes have not come to the temple twice, which in the first case foreshadowed the beginning of the war and a strong earthquake in the second. Day of the Assumption of the Mother of God is connected with one more amazing phenomenon. Every year, on the Feast of the Annunciation, local people bring white lilies to the temple, leaving flowers at the icon of the Mother of God until the Dormition comes. The flowers completely dry out in five months but every year on August 15 beautiful white flowers start blooming again on the lifeless stalks cracked from the heat.
Your active city break in Kefallonia. Attractions, recreation and entertainment - best places to spend your day and night here
Beach relaxation and excursions to natural attractions of Kefalonia are considered the main entertainment for travelers. Every town has numerous entertainment facilities, restaurants, night …

Open
It is particularly interesting to explore Kefalonia during the days of major religious holidays when unique celebrations and rituals are held in all cities of the island. Interesting traditions can be witnessed in the last week before Easter. On Holy Thursday, on the city streets, one can notice children painting large earthenware jugs. 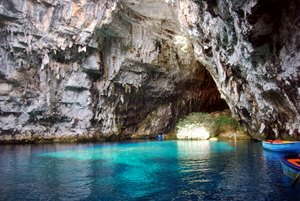 It is customary to smash these jars on Saturday before Easter - it is believed that residents of Argostoli were the founders of this interesting tradition. Locals use large jars to store various products. To attract a rich harvest in the new season, it is customary to break old jugs and make new ones instead. It is believed that this tradition was first born in pagan times, but with the advent of Christianity inhabitants of the island did not abandon their old customs.
Advices to travellers: what you should know while being in Kefallonia
1. In many stores and supermarkets sellers check the authenticity of banknotes. This procedure is mandatory and is very widespread. Counterfeit banknotes are detected frequently, and their …

Open
Interesting celebrations are held on the island all week before Easter. Here you can observe beautiful processions passing through the central city streets. Some unique religious shrines stored in local churches are put on public display only on a festive day. Kefalonia is one of the world's major pilgrimage centers. Most believers and ordinary travelers visit the island on the eve of major religious holidays in order to see miracles taking place on the island with their own eyes. 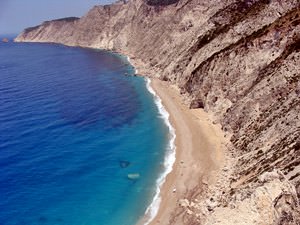 On any given day, guests of the island can personally observe one of these incredible wonders. To do this, you need to go to the foothills of Omalon where the ancient monastery of Holy Jerusalem is located. Next to this monastery is a small cave temple founded by the monk Gerasimos in the 16th century. Now the monastery is connected to the temple by a very narrow underground passage. To get to the temple, one has to literally crawl through it.
Best beaches and recreation areas around Kefallonia
Vacation at the picturesque island is impossible without beaches. Kefallonia is extremely popular among fans of water sports and active leisure. Makrys Gialos is probably the calmest and the …

Open
It is surprising that even big men can easily overcome such a narrow passage. Absolutely everyone is allowed to visit the ancient temple. After overcoming the narrow tunnel, all visitors to the cave temple find themselves completely clean, none of them get dirty. Today, Kefalonia is considered one of the most amazing places on Earth where friendliness and hospitality of locals give the island a special charm. They proudly tell travelers about the amazing features and traditions of their homeland.

This guide to traditions and festivals in Kefallonia is protected by the copyright law. You can re-publish this content with mandatory attribution: direct and active hyperlink to www.orangesmile.com.
Kefallonia - guide chapters 1 2 3 4 5 6 7 8 9 10 11

City tours, excursions and tickets in Kefallonia and surroundings

Survived castles around Kefallonia
♥   Castle 'Assos Castle' Assos, 13.8 km from the center. On the map

♥   Castle 'Chlemoutsi' northwestern Elis, 63.7 km from the center. On the map

♥   Castle 'Vonitsa Castle' Vonitsa, 77 km from the center. On the map Colors of Kefallonia in photos

Traditions and festivals in cities around Kefallonia

Ithaka Island
Taverns are very important for the Greek people. The thing is that they love to spend evenings with family and friends in taverns, chatting, eating and drinking local alcohol under folk music. You will hardly find a free table in the tavern at 9 o’clock. Locals like to cook and there is also a couple of culinary clubs on Ithaka, but a meeting with friends in a tavern with a ... Open »
Lefkada
Since 1962, Lefkada has been the permanent venue for important international event, Festival of folklore. The main theme of this interesting and colorful event is the promotion of friendship, peace and brotherhood among peoples of different cultures. Dances, folk music and craft traditions remain the main highlights of it. Travelers who visit the island during the festival will ... Open »
Zakynthos Island
If you decided to have a snack and realized that there are only males are sitting in a small tavern, with newspapers, discussing something, then it's better to find another place for your meal. For a long time, the Greeks have been preferring to spend time discussing philosophy, politics, sports, and everything else in social places and are not too happy about the presence ... Open »
Zakynthos
Zakynthos is widely recognized as the home city of Dionysios Solomos, the author of the national hymn of Greece. One of the first rebellions in Europe also happened in Zakynthos in 1628. As historically people of different nations arrived at the island, local people are very tolerant and treat various cultures with patience. Needless to say, vacationers should respect local ... Open »
Igoumenitsa
As Orthodox Christianity is the primary religion in the country, all religious holidays are widely celebrated. Easter, Christmas, and Assumption of the Mother of Christ are among the most important holidays in Greece. Before the start of the Lent (end of February or beginning of March), there is a colorful festival in the city that is called Apokries. People put on ... Open »
Corfu island
Don’t get confused if a salesman looks you directly in the eyes – this is not a sign of aggression, this is a courtesy. It is common here to keep eye contact during the whole important meeting. If your eyes are just wondering around, people will think you are not interested in the conversation. When having personal conversations, the Greeks don’t tend to touch the ... Open »

Cityguide on traditions, mentality and lifestyle of people in Kefallonia. Learn the best periods to visit Kefallonia to discover its soul - authentic festivals, events and celebrations. We will also reveal the interesting habits, attitude towards the world and to tourists in Kefallonia.