Detailed hi-res maps of Palermo for download or print 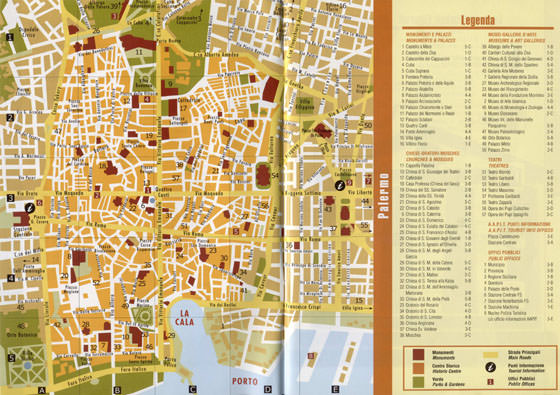 Search for services, infrastructure and sights on map of Palermo

Our guide chapters over Palermo

Another remarkable landmark of Palermo is the Porta Nuova. The gate serves as a symbolic entrance to the historical center of the city. The gate was built in the second part of the 17th century. The construction presents a complex architectural composition of ingenious statues, large stanzas and pyramid shaped cupola. The most remarkable and significant historical landmark of the 18th century is the Orlean Palace … Open

One of the most popular destinations of rest and recreation among local folks and city guests is the Foro Italico park. The park takes a vast territory and fits all kinds of activities and leisure. Beach recreation fans will love a scenic beach named Mondello. An attractive resort area is located in the nearest neighborhood of Palermo. The territory of the beach features numerous entertaining establishments and all … Open

The Pasticceria Oscar restaurant specializing in ethnic cuisine will be a perfect place for a family dinner. In the evenings the restaurant is always crowded that is why a table for dinner should be reserved in advance. If necessary visitors can order to-go dishes there. Italian wines connoisseurs and those who can not imagine a meal without dainty fish dishes will love the Badalamenti Cucina e Bottega restaurant. … Open

Traditions and mentality of Palermo

The World Festival on the Beach will be of great pleasure for diving enthusiasts. Exciting entertaining programs are organized for scuba diving fans as well. Year after year the festival turns of a greater format adding the program with interesting events and new competitions as by now the program of the festival is not limited just to water sports contests. The festival engages fencers and cyclers as well. An … Open

Theater fans should definitely visit the Teatro Massimo Vittorio Emanuele. It is Italy's biggest opera house and one of the largest in Europe, which regularly welcomes world-class opera singers on its stage. The sumptuous opera house was built in the late 19th century. It occupies a very beautiful classical building supplemented by original elements of decoration in the ancient Greek style. Nearby is a small … Open

5. Tips are welcome everywhere. 10% of the total sum as a cash reward will be quite enough. Some upscale restaurants include service fee in a total amount of a bill. To reward a taxi driver one should just round up a sum according to the counter to any convenient one. 6. Street call boxes offer the optimum rates for inter city and international calls. The boxes are set in all the main streets of the … Open