Detailed hi-res maps of Sicily for download or print 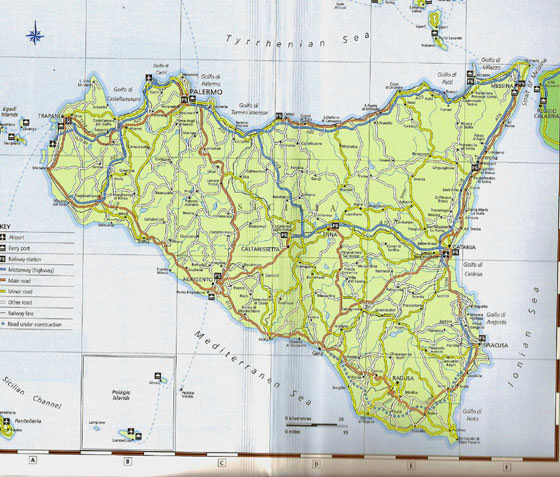 Search for services, infrastructure and sights on map of Sicily

Our guide chapters over Sicily

A walk through the valley will appeal to those who are interested in the history of ancient Rome and Greece. Other local attractions include ruins of temples of Jupiter, Juno, Concordia, Demeter, Vulcan and other ancient gods; the age of old buildings is more than two and a half thousand years. Today, archeologists continue to work within the historic district of the city; you could see their valuable findings in … Open

The hotel of Cardillo Bonocore Maletto is ideal for travelers wishing to be drawn in the atmosphere of national hospitality. It is situated in a gorgeous building, which is a vivid example of the classic Sicilian baroque. This famous hotel offers an upscale wellness center; well-kept neighborhood is occupied by a landscaped garden. The hotel Baglio Oneto located in the picturesque town of the same name is amazing. … Open

The youngest visitors will enjoy Dinosaur Park with an abundance of huge pieces of prehistoric animals. Every day there is an unforgettable laser show and music performances for guests at the theme park. Fans of hiking would be offered to try a lot of interesting routes on the foothills of Mount Etna. Active volcano has about four hundred craters and it is very interesting to watch them. Local landscapes resemble … Open

In addition to traditional treats from pork and veal, fans of meat dishes are offered pretty creative dishes made ​​of horse meat. Traditional food is cotolette schnitzel and small rolls of veal, involtini alla siciliana, served with a variety of toppings. Choice of vegetable dishes in Sicilian restaurants is huge; in addition to meat and fish treats, guests are always offered to order fresh salads and … Open

The most interesting holiday of February is the Carnival, which is celebrated in Acireale. This colorful and noisy celebration would be interesting for both adults and children. As for less significant and large-scale events, then they are represented by numerous fairs and gastronomic festivities. They are held on the island all year round, so fans of shopping and gastronomic tourism certainly won’t be bored. … Open

Mount Etna continues to remain Sicily's trademark. It is the largest active volcano in Europe. Interesting tours are organized to the volcano. You can admire it from a safe distance. The large adjoining territory is constantly covered with ash and is absolutely lifeless. Here, you can make wonderful memorable pictures against lunar landscapes. Etna erupts frequently. Even if the eruption does not take place for a … Open