Preparing your trip to Palermo: advices & hints - things to do and to obey 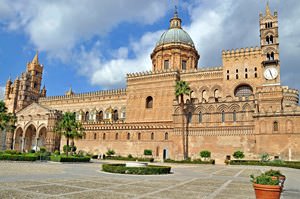 1. The best and most convenient way to cruise the city is underground as its route runs though all significant landmarks and sights of the resort. Other city transports available in Palermo are buses and trams which feature a single type of tickets. The historical center of the city is better to be explored on foot as in this case tourists will get a chance to fully enjoy and embrace the beauty of local landmarks and attractions.
2. Taxi is one of the most in demand city transports even though charged rates are rather high. A cost of a trip should be negotiated in advance. An average cost of a trip up to 10km will be about 10USD.
3. Tourists should necessarily keep to the traditional rules of etiquette. Entering a public place one should necessarily greet everybody and leaving the place one should say good bye. Tourists may address local people for help, however any assistance needs to be rewarded.
4. Utility supplied voltage is 220V. Most of the hotels and inns are equipped with European standard sockets. Before a journey one should check all the appliances for compatibility and get necessary adapters and connectors.
5. Tips are welcome everywhere. 10% of the total sum as a cash reward will be quite enough. Some upscale restaurants include service fee in a total amount of a bill. To reward a taxi driver one should just round up a sum according to the counter to any convenient one. Copyright www.orangesmile.com
6. Street call boxes offer the optimum rates for inter city and international calls. The boxes are set in all the main streets of the city as well as in close vicinity to public and entertaining establishments. For international calls one should choose a call box with a “TELESELEZIONE” sign. Such call boxes accept only special plastic cards or coins sold in all news stalls and tobacco shops.
7. Grocery stores and markets start working not later than 8am meanwhile other shopping centers and stores get open at 9am. Daily working hours may vary from one establishment to another. Small shops and boutiques close at 4 – 5pm meanwhile large shopping centers continue to work up to 20:00.
Cultural vacation in Palermo - fantastic architecture and monuments
Palermo Cathedral, San Giuseppe dei Teatini, Villa Giulia, Catacombe dei Cappuccini, La Martorana, as well as many others, they all become the world's cultural heritage objects and remain as iconic monuments for Palermo …

Open
8. Prudent tourists should visit one of the open markets to buy foods as in this case the price of the goods will be up to 40% lower than in large stores. Shop-a-holics should pay specific attention to leather goods of local production as these feature ultimate quality.

Preparing your trip to Palermo: advices & hints - things to do and to obey You can re-publish this content with mandatory attribution: direct and active hyperlink to www.orangesmile.com.
Palermo - guide chapters 1 2 3 4 5 6 7 8 9

What to visit being in Palermo - unique sights

Distance from Palermo center - 0.4 km.
Construction of the shrine began in 1509. But the monastery was never fully completed. Numerous military conflicts and threats stood in the way of the monks. All of Palermo's forces were focused on defending and fortifying the city during this period. The city government bought the land from the monks in 1569. This site was used for military purposes later. The historical buildings located here managed to be completely preserved only by a miracle. The monks still managed to build a church. A military camp was formed in it. But it lost its military significance at the end of the 16th century. … Read further

Tips for the cities around Palermo

Sicily
2. Travelers who don’t tolerate the heat are recommended to avoid trip in July and August. During this period, the temperature can reach 40 degrees Celsius; this time fans of beach holiday arrive to the island. 3. The holiday with children would be the best from July to September; at this time all the water parks and entertainment centers, including Etnalend, are working ... Open »
Aegadian Islands
The Aegadian Archipelago is rich with a large number of wild animals and plants. There are more than 40 endemic species. So, if you are interested in botany, walking will be your favourite activity here. However, not only botanists will be happy to visit the islands. People have been always living in harmony with nature on the archipelago. There are many nice bays, valleys, ... Open »
Vulcano
2. In local stores, you can buy excellent wine Malvasia. It is produced at one of the old wineries. Wine is a popular souvenir here. Also, travelers choose marmalade Cotognarta as a gift to the loved ones. It is made of quince. You can buy this dessert literally in any shop or on the market. 3. If you are going to vacation here, you should certainly bring all the ... Open »
Catania
2. Catania is famous for its low prices for all kinds of goods. It is safe to say that the prices in local shops and markets are among the lowest in the country. Hotels and restaurants are also not distinguished by high rates for their services, so you can easily afford staying in a luxury hotel or go to dinner in the restaurant you like. 3. Experienced travelers are ... Open »
Messina
2. Messina can hardly be called a typical beach resort, but there are still some comfortable beaches in the city and outside it. Even experienced swimmers are not recommended to swim far into the sea, as strong undercurrents pose a serious danger. 3. The easiest way to get to Messina is by ferry from the mainland Italian city of Reggio Calabria. A 5-kilometer ferry ride ... Open »
Calabria
2. Shoppers should pay attention not only to numerous souvenir shops, but also to outfit stores. You can buy clothes and accessories of excellent quality for excellent prices; several times a year large shopping malls have large sales. It’s worth to go to larger cities in the region in search of the best fashionable clothes. 3. Travelers who expect to bring many exciting ... Open »

Travelling to Palermo - advices and tips. What should be provisioned in advance, the rules you might want to follow, and the things you better avoid doing in Palermo. We help you to make your trip smooth and easy, with no unexpected surprises.