Video of flights over top monuments of Rome in HD format.
Use 'Full Screen' mode.
What are the most important landmarks to see first and foremost in Rome? Without a doubt, the original architecture of the city deserves the highest attention. Colosseum, Saint Peter Basilica, Vittoriano, Castel Sant Angelo, Santa Croce in Gerusalemme and many others – are the architectural landmarks that attract millions of tourists every year. Let’s visit Rome right now by making a virtual tour using our fantastic 3D flight simulator! Just start the video on this page and make a flight over the main sites of Rome, which are presented in a three-dimensional format. Besides that, our review includes interesting facts and colorful photos of every monument. 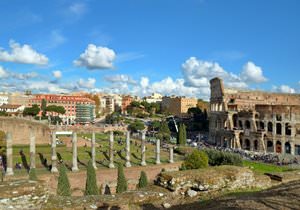 Facts:
» The Colosseum was the largest amphitheater in the entire ancient world. It could receive as many as 50,000 people. Originally, it consisted of four floors; the first three had wide arched entrances, while the fourth had rectangular doorways.
» From historical sources it’s known that grand gladiatorial games were held at the opening of the Colosseum. About 5,000 wild animals were released in one day.
» Roman Coliseum is depicted on 5-eurocent coin.
» Under the floor and the arena are subterranean chambers, where the gladiators rested before the performance. There were times when the wooden flooring of the Roman Colosseum was cleaned, and the entire bottom area of six acres was filled with water. This made it possible to organize naval battles there.
» The fact that the Colosseum was designed so that all viewers could disperse in five minutes is important and noteworthy. Interior of the Colosseum is divided into the arena, where performances took place, podiums and cavity, where animals were locked before the fight.
» The Roman Coliseum has 76 inputs; in addition, four additional inputs were intended for the emperor, nobles and gladiators. 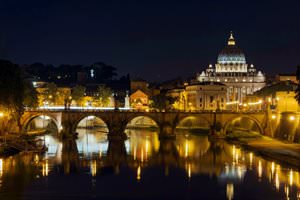 Facts:
» Saint Peter Basilica is the Catholic Cathedral, the largest building of the Vatican and the largest Christian church in the world.
» The tomb of the Apostle is situated under the altar of the cathedral.
» The statue of the Holy Apostles Peter and Paul towers at the entrance. Peter holds the keys of the kingdom of heaven, handed to him by the Lord.
» The cathedral has five doors. Last on the right side is the Holy Door, and it’s opened only in the Holy Year.
» Around the perimeter of the cathedral there is a string of chapels, where there are outstanding works of art, precious relics of Christianity, and numerous tombs of popes, kings and emperors.
» Almost all the major architects of Italy participated in designing and construction of Saint Peter Basilica. 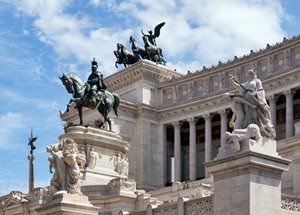 Facts:
» Vittoriano is a monument in honor of the first king of united Italy, Victor Emmanuel II. Construction of this colossal monument lasted half a century.
» Vittoriano is the monument of loyalty to the Motherland. At Altare della Patria with a chapel in the center there is the statue depicting a triumphal procession of Labor and Love for the motherland; under the statue is the tomb of the Unknown Soldier, known as the Altar of the Fatherland.
» Vittoriano houses two museums: the Museum of the Risorgimento and the Central Museum of the military banners fleet.
» Despite the reverent attitude of the Romans to the idea of the monument, the townspeople find that it doesn’t fit the neoclassical massiveness of the baroque Piazza Venezia, so Vittoriano is called ‘the wedding cake’, ‘the false tooth’ and ‘the typewriter’.
» Two fountains are seen before Vittoriano; the left is the symbol of the Adriatic Sea, and the right symbolizes the Tyrrhenian Sea. At the bottom of the equestrian statue there are symbolic images of famous Roman cities. 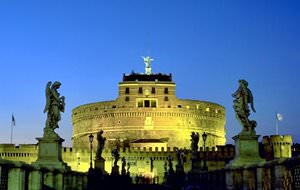 Facts:
» This is where emperors were buried, popes lived, artists and scientists were imprisoned.
» The castle owes its name to the legend about Archangel Michael appearing at the top of the mausoleum and sheathing his sword as a sign that the plague that has tortured Rome was ended.
» The famous jeweler, Benvenuto Cellini, was in this castle as a prisoner. He was accused of embezzling gems of the papal tiara. Soon he managed to escape, and then he was re-arrested and imprisoned in the dungeon.
» The most valuable item in the museum is the painting of the risen Christ on the wall of the chamber, where Cellini was imprisoned.
» Castel Sant'Angelo was the custody of the famous Count Cagliostro. Holy Inquisition accused him of heresy, necromancy and organization of secret societies.
» The most vivid and dramatic event in the history of the castle is a nine-month siege of Rome by lance knights. Citizens used heads of marble statues, which adorned the mausoleum, as missiles to hit the siege. 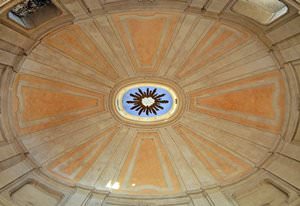 Facts:
» Santa Croce in Gerusalemme is one of the pilgrimage churches of Rome. The walls of this church house the Life-giving Cross.
» The church was built on the site of the ancient palace Sessoriya.
» The side chapel houses three fragments of the Cross of Christ found in Jerusalem: a nail, two thorns from the crown of thorns, and the remains of boards nailed to the cross.
» The church was named in honor of the Cross on which Christ was crucified.
» Murals depict history of acquiring the wreckage of the Cross of Christ.
» The church has an underground chapel with survived radiant mosaics and the ancient statue of Juno. 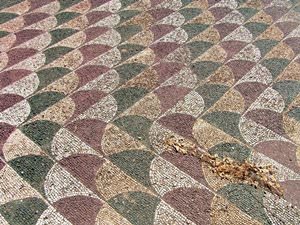 Facts:
» Baths of Caracalla are thermae of Emperor Caracalla in Rome.
» Baths were considered one of the wonders of Rome.
» They are decorated with bronze bindings of semicircular windows and thin slices of translucent ivory stone.
» Caracalla was supplied with clean water from mountain springs coming from a specially built aqueduct.
» All halls of Baths of Caracalla are decorated with colored mosaics. On the floor you can see scenes from the history of Rome.
» Visitors could observe performances of various troupes of actors, for whom performance at the arena of Baths of Caracalla is tantamount to international recognition. 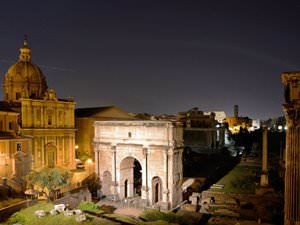 Facts:
» Arch of Septimius Severus is the arch erected in honor of the victories of Emperor Septimius Severus and his sons.
» The arch is decorated with bas-reliefs and sculptures narrating the battles of the Emperor with the Parthians.
» Both sides of the arch are decorated with inscriptions glorifying the deeds of the emperor who brought Rome to greatness and provided bread to the empire.
» The base platform, on which the ancient orators had appeared, has survived on the left side of the arch.
» In ancient times, there was an ancient two-wheeled chariot with four horses at the top of the arch. That’s how it’s depicted on Roman coins. Unfortunately, the chariot hasn’t survived to these days.

Basilica of St Paul Outside the Walls, Rome

Facts: » Basilica of St Paul Outside the Walls is the great patriarchal basilica of Rome included in the World Heritage List.
» It was erected by Emperor Constantine at the burial site of St. Paul.
» Emperor Theodosius I found this church unworthy of such a sacred place and began the construction of a much more impressive temple.
» The basilica houses the precious holy relic, the sarcophagus containing the remains of St. Paul.
» The basilica is decorated with medallions with the apostles, the magnificent mosaics, paintings, depicting religious motifs, and a marble floor.

Build your walking routes in Rome on the landmark map

Architectural landmarks in the regions around Rome

Napoli
San Francesco di Paola is the most significant church built in a neoclassical style in Naples. The basilica was constructed upon the order of King Ferdinand I in 1815 to honour St. Francis who, as the king thought, helped him return the land occupied by the French. The architect of the basilica was inspired by the famous Roman Pantheon, so he built it in the style of a rotunda and decorated it with a 53-meter dome. The main treasure of the ... Open »
Florence
Santa Maria del Fiore means ‘the flower of St. Mary.’ The Cathedral is the most important in Florence and one of the largest churches in Italy. The Florence Cathedral is included in the UNESCO World Heritage List. At least six architects were employed in the development of the project and construction. A number of famous painters and sculptors, including Michelangelo, worked hard to decorate the Florence Cathedral. One of the most ... Open »
Venice
St Mark Basilica is the cathedral of the Roman Catholic Archdiocese of Venice. That’s most famous of the churches of the city and one of the best known examples of Byzantine architecture in Western Europe. Since the 9th century, the basilica was known as the Golden Church and was the symbol of Venetian wealth. It owed its second name to luxurious furnishings and golden mosaics. The cathedral has a free-standing bell tower of about 100 meters ... Open »
Palermo
The relics of Saint Rosalia rest in the cathedral church. She is considered as its intercessor. Tombs of the nobles who contributed much to the development of the Kingdom of Sicily have been preserved in honor of them. At the beginning of the 12th century, the first ruler was crowned in the Church of the Assumption of the Virgin Mary. The construction resembles a castle. The House of God differs from the mundane one with its bell tower and ... Open »
Dubrovnik
Dubrovnik is famous for its shield in the form of 2-kilometer fortress walls. The complex is located on the rocky bank. There are additional fortifications in some places. Starting from the historic center, the walls create a circle and turn the city into an impregnable fortress. The fortification was constructed in the 10th century. The limestone walls have been repainted many times for the last centuries. They gained their current appearance ... Open »
OrangeSmile.com - online travel reservation expert providing reliable car rental and hotel booking services. We feature more than 25.000 destinations with 12.000 rental offices and 200.000 hotels worldwide.
Secure Server