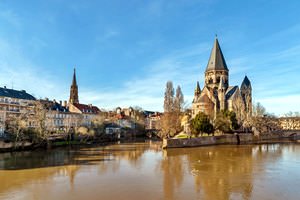 France offers tourists excellent opportunities for shopping, and to find unique and quality things can be absolutely in any city, not only in Paris. In local boutiques there is a huge variety of branded clothes of elite and budget brands, a huge selection of perfumes and cosmetics of the best quality. As souvenirs from France, local wine, cheese, and champagne are taken away. Many tourists, strolling along the streets, buy in local boutiques and benches, unique things for the interior. Lovers of grand discounts will be able to make a successful shopping in outlets, located near major cities. A wide selection of antiques and French vintage can be found in big flea markets, popular both among tourists and locals.
National traditions and mentality of people in France
The French have long been fashion legislators in a wide variety of industries. French culture was an example and a model for imitation. Around the …
Read further
As in other European countries, in France there are two pronounced season of sales: winter and summer. Winter begins in January and lasts until the end of February. The summer passes in July-August. Discounts at this time reach a record 70%. Another nice shopping bonus in France is the Tax Free system, which allows you to return 10% of the check value during the customs supervision, provided that the purchase amount in one place exceeded 100 Euros. In order to issue a refund, in the store before payment, it is necessary to ask the seller to fill in a special coupon. On Sundays in France, even the largest trading centers and shops do not work. On weekdays, they begin their work at 10AM and work until7PM. 1 day a week, usually on Thursdays, the shops work longer.
Shopping in Paris is an important part of exploring this amazing city. The most luxurious boutiques are located in one of the most popular places for tourists in the country - on the Champs Elysees. Along the street there are shops of the best French brands like Gucci, Dior, Cartier, Chanel, and Hugo Boss. Prices in these stores are quite high, but many tourists look in them just to get acquainted with the latest in French fashion or purchase an accessory on sale. On the street of Saint Honore there are also a lot of boutiques, among them the largest Chanel store in the country. In this place the guests of Paris will be able to plunge into his mood, see the real embodiment of Parisian elegance and buy unique things. Copyright www.orangesmile.com
France cultural sights. What to see?
France is the most popular and visited country, and Paris the most toured city in the world. This is not surprising because the country has an …
Read further
The center of the French style of life is one of the most recognizable places in Paris - the Lafayette Gallery. Boutiques of the most famous brands coexist with classic French restaurants and cafes. This is the place where the style adjoins with the gastronomic fashion. Another gallery in Paris, Prentham, is suitable for those who are looking for a place with a more democratic price policy. In the season of sales, in Prentham you can find things from eminent designers at uniquely low prices. Cheap shopping can be done in Rivoli Street, on it boutiques of both local and foreign brands - Zara, Gap, H & M are displayed. It is important for tourists to remember that in the most popular tourist areas of the city, prices in stores can be much higher, and therefore it makes sense to first get acquainted with different stores and compare offers. 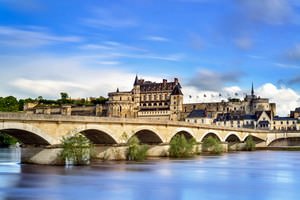 Magnificent shopping awaits tourists in other cities of the country. In Marseille, you should look at the street Saint-Ferreol, where large shopping centers and boutiques are concentrated. You must also visit the local markets, where everything is sold: from fresh seafood and cheeses to delicacies and sweets. In Lyon, shopping centers are located on two central streets - Republic Street and Edoura Herriot Street. On them are located both elite boutiques with expensive clothes and jewelry, and more inexpensive brands. Nice, offers a huge opportunity for shopping. On its streets there are more than 7 thousand boutiques and shops. In addition to clothing, in France, it is worth buying a few perfume bottles and cosmetics. The quality of perfume, as in France, is not found in any other country in the world.
Things to do in France - active leisure
France is incredibly popular with tourists not only because of its rich cultural history, but also picturesque landscapes, the possibility of free …
Read further
Another popular French souvenir is cheese and wine. In France, they are also of incredibly high quality and have a unique, unique taste. The best French wines are produced in Burgundy, Beaujolais, Champagne, Alsace, and Bordeaux. The main symbol of France is the Eiffel Tower. Souvenirs with its image like trinkets, mugs, T-shirts are among the most sought-after. The French spirits of world famous brands are very popular. Among the lesser-known firms attention should be paid to Fragonard. It produces no less decent models at a more democratic price. In Provence, you can buy products for the interior in a classic Provencal style with a picture of lavender.

Coolest places in France from our Guinness book 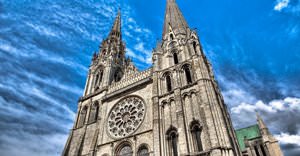 There is a cathedral in Chartres. It is a religious and architectural monument of world significance. The very first church was built in its place more than one and a half thousand years ago. Miniature churches were constantly being rebuilt. The first cathedral was built in their place in the 10th century. It didn't last long. The wooden cathedral was destroyed by fire in 1020.

A significant event for the cathedral occurred in 876. A valuable relic was transferred to it. This is the Holy Shroud of the Virgin Mary. The cathedral has repeatedly suffered from fires and other natural disasters. But the shroud miraculously managed to survive each time. The cathedral, which guests of Chartres can see today, began to be built in 1194. It was consecrated in 1260. The cathedral has never been … Read all 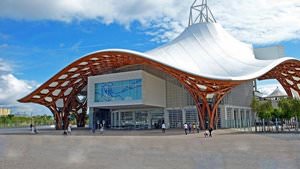 The opening of a branch of one of the most famous museums in the world took place in Metz in 2010. This is the Centre Pompidou. A unique building was built for the cultural center. About 69 million euros were invested in its construction. The unusual floating roof became the main feature of the building. Some compare it to a Chinese hat. It resembles an alien ship to others. The competition was announced before the construction of the museum. Architect Shigeru Ban from Japan was the winner.

It was decided to build a cultural center on the territory of an extensive park. A functional museum building would blend in with the vegetation surrounding it. The idea to cover it with an unusual roof to make it more visible brought victory to the bold project. The museum is quite large. Despite … Read all
All unique sightseeing France

Sightseeings of France in photostream

Shopping malls, boutiques and outlets in top cities of France

Paris
Shops on Rivoli Street are distinguished by a lot more affordable prices. On this street, visitors will find boutique stores of numerous international brands, including Zara, a large Gap store, and a whole pavilion of Yves Rocher cosmetics. It is possible to find quality and modern items at very affordable prices in this part of Paris. There are many interesting souvenir shops on Rivoli Street. Moreover, apart from shops, travelers will find charming and inexpensive cafes. It is possible to … Read more

Aix-en-Provence
Pay your attention to edible souvenirs. For example, you can buy excellent anise liqueur in Aix-en-Provence, as well as beautifully decorated gift sets of traditional calissons, and sets of herbes de Provence. Multiple grocery shops offer regionally made wine and liqueurs, meat delicacies, cheese from local farms, and other regional products. The abundance of antiquity shops and flea markets is an interesting peculiarity of Aix-en-Provence. Of course, they are excellent for shopping for … Read more

Arles
Fourchon is a small mall nevertheless it has several exclusive shops that are worth visiting. You will find electronics stores here, as well as clothing and cosmetic shops, and several attractive restaurants. Shopping Promenade Arles is a fabulous and interesting shopping destination in the city. This mall looks like a beautifully decorated shopping street with boutiques and designer shops of the most famous French brands. All fashionistas should visit Armand Thiery, a popular shop selling … Read more

Annecy
The legendary Galeries Lafayette chain has a department store in Annecy. This is a prime destination for all fans of luxurious designer outfits and branded goods. The most expensive shops in the city are open in this department store. As expected, boutiques at Galeries Lafayette are targeted at upscale buyers. There are showrooms of such famous brands as Ralph Lauren and Armani. You will also have an opportunity to visit Burberry and Hermès shops. It is possible to buy nearly everything in … Read more

Nice
Travelers, who enjoy shopping and walking in department stores, will be excited to visit Cap 3000. This shopping center is located close to Nice Airport and remains one of the largest shopping centers in the region. In Cap 3000, travelers will find dozens of shops that sell clothes and shoes. Here travelers can find items of the internationally famous Chevignon brand, shop Lacoste accessories and latest styles by Geox. The shopping center also has several cosmetic and accessory shops. Visitors … Read more

Cannes
Premium French department store chain Galeries Lafayette has a shop in Cannes. It is an excellent destination for all fashionistas, fans of designer accessories, and everyone who plans to bring French perfumes from their vacation in Cannes. The shopping center is distinguished by a range of prices. There are expensive designer boutiques and shops that offer affordable prices even for budget tourists. Boulevard de la Croisette is one more interesting shopping destination in Cannes. While … Read more

Lourdes
Lourdes is a center of pilgrimage. People often come here in search of healing from their ailments. Unfortunately, this provokes dishonest sellers to earn money by selling a variety of "miraculous amulets" from miraculous icons to alleged clothing items or personal items of Saint Bernadette. You must understand that such products are useless in fact. You can buy at a similar price only bottles of Holy water from the grotto where the Virgin Mary appeared. Bernadette is a popular image here. … Read more

Map of shops in France cities