Sightseeing in Brittany - what to see. Complete travel guide 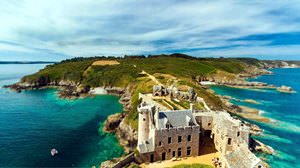 Bretagne is located in north-western France on the vast peninsula between the English Channel and the Bay of Biscay. Its unique climate, beautiful scenery and an abundance of remarkable places make the province inimitable in eyes of tourists. In summer, there is always a refreshing breeze blowing, and winters are always soft and windless allowing travelers to enjoy local amenities.
Advices to travellers: what you should know while being in Brittany
1. Cycling is very popular in local cities. Clean transport is actively used by both locals and tourists who like walking around beautiful places. Many popular hotels provide a bike for …

Open
Bretagne is the famous thalassotherapy center; the province has several large resorts in it. Treatment with sea water, curative mud and seaweed extracts is prescribed not only to people with diseases of the nervous and musculoskeletal systems, but also as a treatment of chronic fatigue and stress.
Perhaps the most vibrant city of the province is Saint-Malo. There are several ramparts in the historic district of Saint-Malo; once it was the center of the slave trade. Walls are equipped with a spacious observation deck; during the tour, visitors can learn a lot about the history of the city. The museum of Saint-Malo situated in the ancient castle is also worth visiting. It’s also worth go to uninhabited islands of Gernesi and Jersey located near the coast. Copyright www.orangesmile.com
Best beaches and recreation areas around Brittany
Brittany coast represents an amazing world of contrasts complemented with charming regional namings. The most romantic area is considered Cote d'Amour known for its fine sand beaches. …

Open
Dinan is full of historical sites; the town is surrounded by a high wall that has survived since the Middle Ages. Among religious sights, the Church of Saint-Malo built in the 15th century, as well as the Basilica of the Savior built three centuries before are notable. A tour will be incomplete without a visit to the fortress city of Brest. In addition to numerous architectural attractions, there are many cultural institutions, including the Museum of Fine Arts with a magnificent collection of paintings. 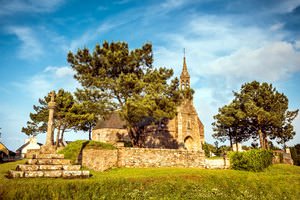 Kemper attracts vacationers with its marvelous scenery. There are several large parks, scenic areas and a fair number of museums and galleries in it. Benodet located at the riverside of Odet attracts artists with its tranquil atmosphere and scenery. Other popular towns of Bretagne are Vannes, Carnac, Quiberon and Belle-Ile. Latest one is the largest most populous city of the peninsula and a popular tourist destination. Here you'll find the most luxurious hotels, restaurants and shops.
Cuisine of Brittany for gourmet with top restaurants and cafe
Bretagne is sometimes called ‘the land by the sea;’ the region owes its name due to the successful geographical location. However, its national cuisine is widely known not because of …

Open
The most visited city in the region is Rennes. It has become famous all over the world because of its unique night festivals. In July, the traditional festival Les Tombées de la Nuit visited by the representatives and fans of different musical directions is held here. During the year, a lot of art exhibitions and events dedicated to different spheres of contemporary art are organized in the city. 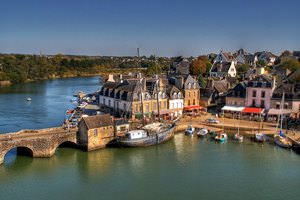 In the surroundings of Karnak, there is one of the most mysterious attractions in human history, dolmens. These stone constructions of impressive size were created in the megalithic era. These dolmens are the oldest on the territory of Europe. They have been explored for many decades but the scientists still can’t find the answers to the questions what they were made for. Some people think that dolmens helped ancient people follow the time course, while others consider them as a part of the big cult construction. Today, the unique historical area is open for visitors. Dolmens are surrounded by very beautiful natural landscapes.
Authentic traditions, festivals and lifestyle of Brittany inhabitants
Indigenous people of Bretagne consider themselves descendants of the Celts; they feature a very hospitable and cheerful nature. Locals are very patriotic and treat the national culture with …

Open
In the surroundings of Rennes, there is one of the main nature attractions of the region, the Broceliande Forest. It is connected with the legends about King Arthur. The visiting of this forest is the matter of honor of all the fans of stories about the Knights of the Round Table. If you remember the local legends, there is Merlin’s grave in this forest. And this is not an only mysterious place here. A lot of incredible stories are associated with this old forest. The researchers have managed to find here the ruins of cult constructions created in the times of Celts. 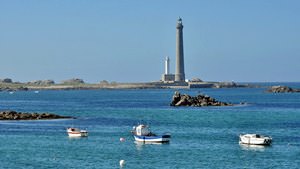 Diner is considered as one of the most beautiful cities in France because of the excellently preserved historical district. The entire territory of the city is a real outdoor museum. There are over 400 luxurious villas built over a hundred years ago. Today, many historical villas are in private ownership and belong to world-famous celebrities. Some historic houses serve as enchanting hotels that let their guests sink into an inimitable atmosphere of the last centuries. The pleasant supplement to your vacation is national restaurants and interesting shops located in the city.

This guide to iconic landmarks and sights of Brittany is protected by the copyright law. You can re-publish this content with mandatory attribution: direct and active hyperlink to www.orangesmile.com.
Brittany - guide chapters 1 2 3 4 5 6 7

♥   Castle 'Château de Trécesson' Morbihan, 55 km from the center. On the map

National and city parks around Brittany
♥   Regional Nature Park 'Golfe du Morbihan' , 72.1 km from the center. On the map

Search touristic sites on the map of Brittany

Sightseeing in regions nearby Brittany

Rennes
The western part of Rennes is considered the most "modern" one. Here are located several large factories and industrial enterprises, as well as a new football stadium named after the local football team "Stade Rennais". One of the most famous attractions of Rennes is located in the city’s suburbs. We are talking about Ferme de la Bintinais. Here you can not only see ... Open »
Brest
If you visit Brest from July to August, you will be able to participate in one of the picturesque annual carnivals that are traditionally organized in the local port. The port turns to the city’s center of entertainment for two months. There you will find music, many locals and tourists, best food from local chiefs, singing and dancing and overall atmosphere of holiday. In ... Open »
Nantes
The most famous gallery of Nantes is Passage Pommeraye, a beautiful three-tiered building in the Baroque style, which halls host various exhibitions and other cultural events. The city attracts not only history lovers, but also shopping fans. The central commercial street of Nantes is named Crebillon. The numerous boutiques located on this street feature couture apparel, ... Open »
Laval
Among the main sights of this town are the medieval castle Château de Laval and the ruins of the town’s gates and walls. These are the main symbols of Laval. In 1020 the town was more like several settlements that were slowly merging into one. In the XIII century here was built a bank and 5 gates. Only the gates named Beucheresse and Woodcutter gates have survived till our ... Open »
Cherbourg
In general the city is very interesting and it can be recommended for family tourism as here you can both have rest and study new things. It this city you can relax and enjoy the tranquility of a small European town. In addition to these factors Cherbourg offers excellent opportunity to study the history of Europe and France. The old part of the city was founded in the ... Open »
Angers
What places should tourists visit in Angers? Having arrived and checked-in, make an excursion to Château D' Angers. In the past, this was a residence of the Dukes of Anjou. The castle was built in the 13th century. The doors of this gorgeous building are open for tourists every day so everyone can see La Chapelle Sainte-Geneviève (the Chapel of Saint Genevieve) that dates ... Open »

All about Brittany, France - sightseeings, attractions, touristic spots, architecture, history, culture and cuisine. Prepare your trip together with OrangeSmile.com - find out the 'must see' things in Brittany, which places to visit, which excursions to take, where the breathtaking views are waiting for you. Planning your trip with this travel guide will help your to get the most out of Brittany in few days.